Business Process Management (BPM) is a management practice for automating tasks that are repeatable and have a common pattern. However, many applications in the real world cannot be described completely from start to finish and include multiple paths, deviations, and exceptions. Moreover, using a process focused approach in certain cases can lead to complex solutions that are hard to maintain. Sometimes business users need more flexible and adaptive business processes without the overly complex solutions. In such cases, human actors play an important role in solving complex problems. Case management is for collaborative and dynamic tasks that require human actions. Case management focuses on problem resolution for unpredictable process instances as opposed to the efficiency-oriented approach of Business Process Management for routine predictable tasks.

Instead of trying to model a process from start to finish, the case management approach supports giving the end user the flexibility to decide what must happen at runtime. In its most extreme form for example, case management does not require any process definition at all. Whenever a new case comes in, the end user can decide what to do next based on all of the case data.

This does not necessarily mean that there is no role for BPM in case management. Even at its most extreme form, where no process is modeled up front, you may still need a lot of the other features that the BPM system provides. For example, BPM features like audit logs, monitoring, coordinating various services, human interaction (such as using task forms), and analysis play a crucial role in case management as well. There can also be cases where a more structured business process evolves from case management. Thus, a flexible BPM system enables you to decide how and where you can apply it.

Here are some common use cases of case management:

Red Hat JBoss BPM Suite provides a wrapper API called casemgmt that focuses on exposing the case management concepts. The core process engine has always contained the flexibility to model adaptive and flexible processes. These features are typically also required in the context of case management. To simplify picking up some of these more advanced features, the wrapper API exposes some of these features in a simple API. Note that this API simply relies on other existing features and APIs, and can easily be extended. The API and implementation is added as part of the jbpm-case-mgmt module.

Process instance description
Each case can have a unique name, specific to that case.
Case roles

A case can keep track of who is participating by using case roles. These roles can be defined as part of the case definition by giving them a name and (optionally) a cardinality. Case roles can also be defined dynamically at runtime. For active case instances, specific users can be assigned to roles.

You can define roles for a case definition and keep track of which users participate with the case in which role at runtime. Case roles are defined in the case definitions as below:

The number represents the maximum of users in this role. In the example above, only one user is assigned to role responsible.

The case roles cannot be used as groups for Human Tasks. The Human Task has to be assigned to a user with the case role, hence a user is selected in the case role based on random heuristics:

Ad hoc cases
One can start a new case without even having a case definition. Whatever happens inside this case is completely determined at runtime.
Case file
A case can contain any kind of data, from simple key-value pairs to custom data objects or documents. A case file contains all the information required for managing a case, and comprises several case file items each representing a piece of information.
Ad hoc tasks

Using the ad hoc constructs available in BPMN2, you can model optional process fragments that can be executed during runtime.

This could occur in the following ways:

In an ad hoc process definition, a case instance is created that allows the involved roles to create new tasks. You can create a new case instance for an empty case as below:

During the start of a new case, the parameter Case Name is set as a process variable name.

Alternatively, you can create a case instance the same way as new process instance: 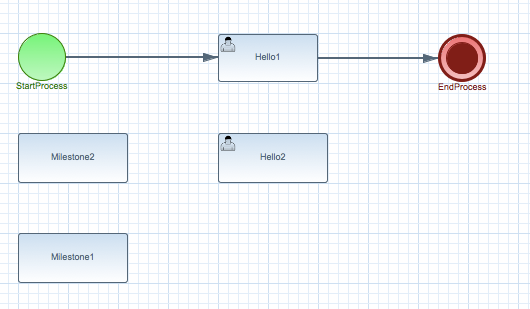 The provided case instance example can have the following work flow: