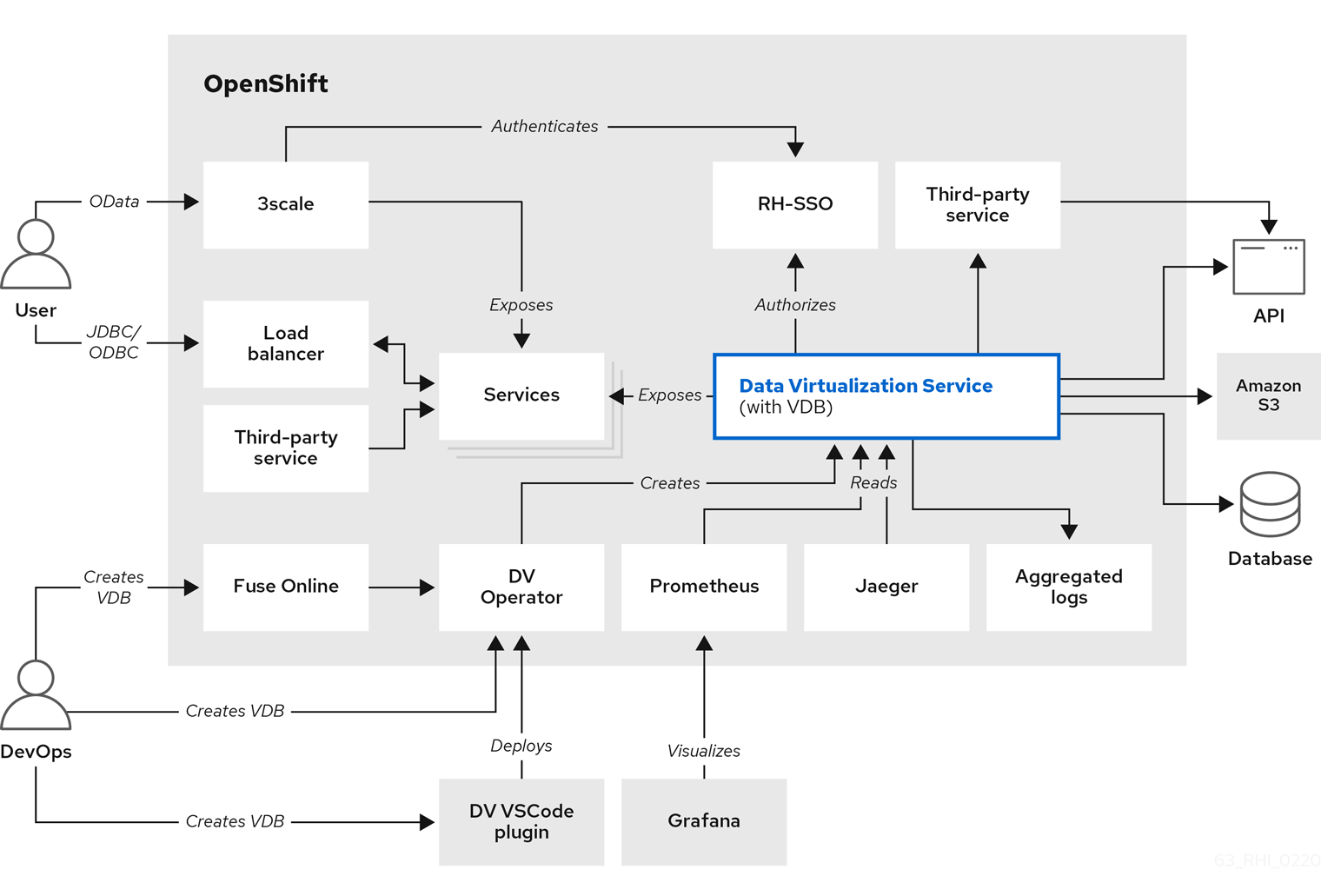 Transport
Transport services manage client connections: security authentication, encryption, and so forth.
Query Engine
The query engine has several layers and components. At a high level, request processing is structured as follows:

The following diagram shows the components that make up the data virtualization service in greater detail: 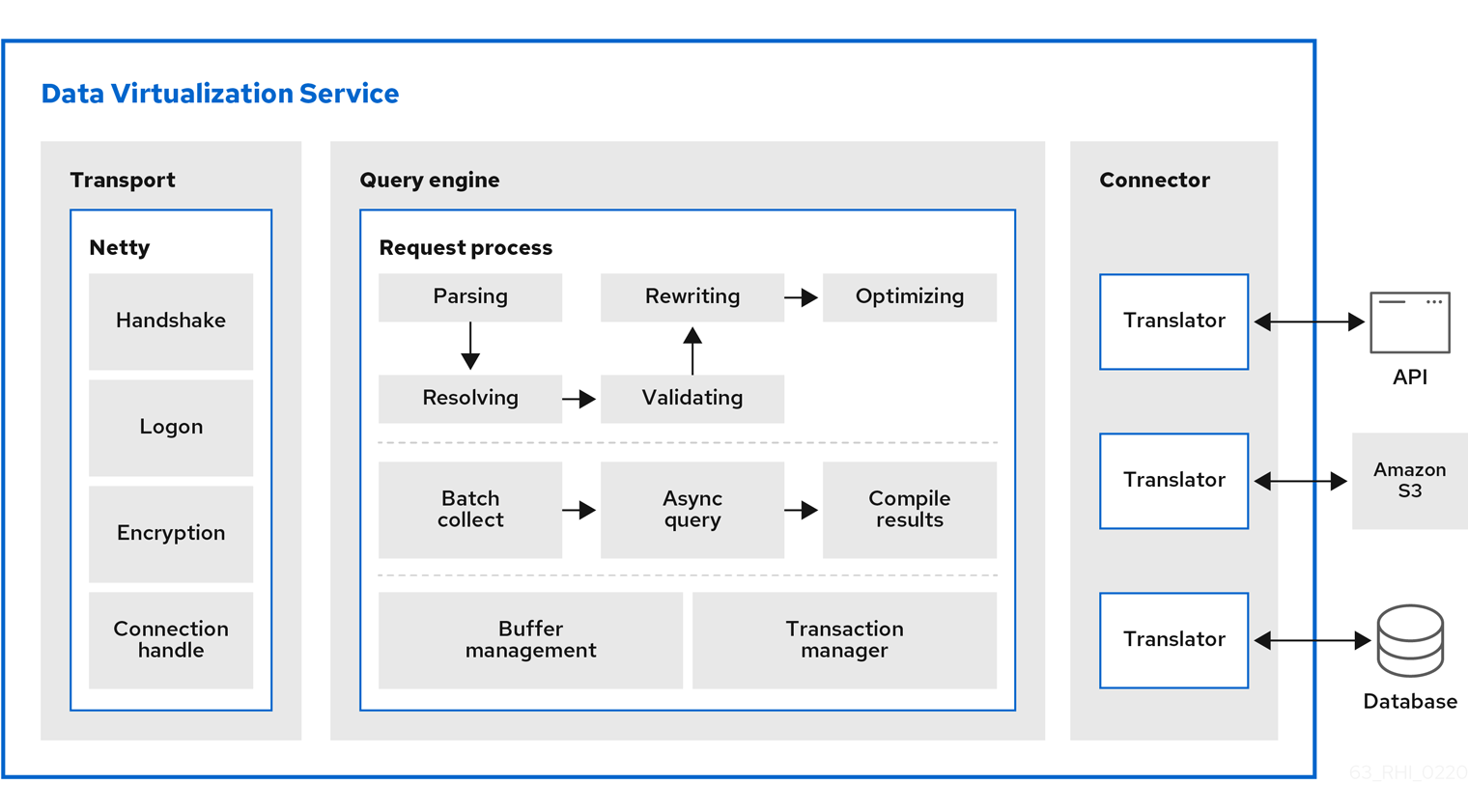 VM or process
A Spring Boot instance of Data Virtualization.
Host
A machine that runs one or more VMs.
Service

A subsystem that runs in a VM (often in many VMs) and provides a related set of functionality. In addition to these main components, the service platform makes the following core set of services available to the applications that are built on top of it:

Data Virtualization cursors all results, regardless of whether they are from one source or many sources, and regardless of what type of processing (joins, unions, and so forth.) have been performed on the results.

Data Virtualization processes results in batches. A batch is simply a set of records. The number of rows in a batch is determined by the buffer system property processor-batch-size and is scaled upon the estimated memory footprint of the batch.

Client applications have no direct knowledge of batches or batch sizes, but rather specify fetch size. However the first batch, regardless of fetch size is always proactively returned to synchronous clients. Subsequent batches are returned based on client demand for the data. Pre-fetching is utilized at both the client and connector levels.

When retrieving batches from the buffer manager, the size of a batch in bytes is estimated and then allocated against the max limit.

Each tuple source has a dedicated file (named by the ID) on disk. This file will be created only if at least one batch for the tuple source had to be swapped to disk. The file is random access. The processor batch size property defines how many rows should nominally exist in a batch assuming 2048 bits worth of data in a row. If the row is larger or smaller than that target, the engine will adjust the batch size for those tuples accordingly. Batches are always read and written from the storage manager whole.

The disk storage manager caps the maximum number of open files to prevent running out of file handles. In cases with heavy buffering, this can cause wait times while waiting for a file handle to become available (the default maximum open files is 64).

When a query is canceled, processing will be stopped in the query engine and in all connectors involved in the query. The semantics of what a connector does in response to a cancellation command depends on the connector implementation. For example, JDBC connectors will asynchronously call cancel on the underlying JDBC driver, which might or might not be compatible with this method.

Server-side timeouts start when the query is received by the engine. Network latency or server load can delays the processing of I/O work after a client issues the query. The timeout will be cancelled if the first result is sent back before the timeout has ended. For more information about setting the query-timeout property for a virtual database, see Virtual database properties. For more information about modifying system properties to set a default query timeout for all queries, see System properties in the Administrator’s Guide.

A merge join first sorts the input sources on the joined columns. You can then walk through each side in parallel (effectively one pass through each sorted source), and when you have a match, emit a row.  In general, merge join is on the order of n+m rather than n*m in nested loop.  Merge join is the default algorithm.

Using costing information the engine may also delay the decision to perform a full sort merge join. Based upon the actual row counts involved, the engine can choose to build an index of the smaller side (which will perform similarly to a hash join) or to only partially sort the larger side of the relation.

Sorting is used as the basis of the Sort (ORDER BY), Grouping (GROUP BY), and DupRemoval (SELECT DISTINCT) operations.  The sort algorithm is a multi-pass merge-sort that does not require all of the result set to ever be in memory, yet uses the maximal amount of memory allowed by the buffer manager.

The second phase of the sort algorithm ("merge") consists of a set of phases that grab the next batch from as many sorted input streams as will fit in memory.  It then repeatedly grabs the next tuple in sorted order from each stream and outputs merged sorted batches to a new sorted stream.  At completion of the phase, all input streams are dropped.  In this way, each phase reduces the number of sorted streams.  When only one stream remains, it is the final output.