Review this section to ensure that your planned deployment meets the requirements for support by Red Hat.

Support for the web console and Red Hat Virtualization Administrator Portal varies based on the web browser you are using to access them.

Generally, use the most recent possible version of Mozilla Firefox, Google Chrome, or Microsoft Edge.

For details on browser support for the Administrator Portal, see Browser requirements for Red Hat Virtualization.

Each physical machine must have the following capabilities:

The Hosted Engine virtual machine requires at least the following:

Fully-qualified domain names that are forward and reverse resolvable by DNS are required for all hyperconverged hosts and for the Hosted Engine virtual machine.

If external DNS is not available, for example in an isolated environment, ensure that the /etc/hosts file on each node contains the front and back end addresses of all hosts and the Hosted Engine node.

IPv6 is supported in IPv6-only environments (including DNS and gateway addresses). Environments with both IPv4 and IPv6 addresses are not supported. 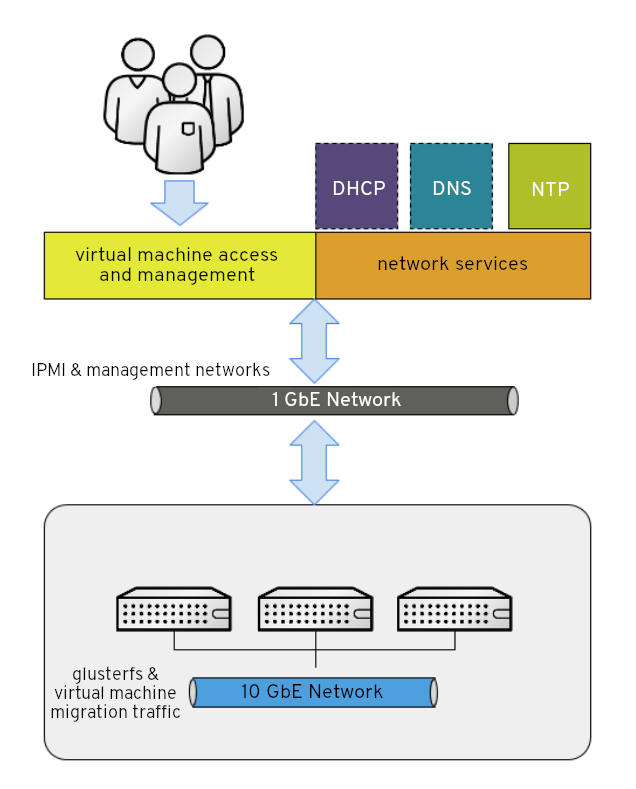 Red Hat recommends each node to have two Ethernet ports, one for each network. This ensures optimal performance. For high availability, place each network on a separate network switch. For improved fault tolerance, provide a separate power supply for each switch.

If you want to use DHCP network configuration for the Hosted Engine virtual machine, then you must have a DHCP server configured prior to configuring Red Hat Hyperconverged Infrastructure for Virtualization.

If you want to configure disaster recovery by using geo-replication to store copies of data, ensure that you configure a reliable time source.

Before you begin the deployment process, determine the following details:

A hyperconverged host stores configuration, logs and kernel dumps, and uses its storage as swap space. This section lists the minimum directory sizes for hyperconverged hosts. Red Hat recommends using the default allocations, which use more storage space than these minimums.

Red Hat recommends Solid State Disks (SSDs) for best performance. If you use Hard Drive Disks (HDDs), you should also configure a smaller, faster SSD as an LVM cache volume. The cache device must use the same block size as the other volumes.

Do not host the bricks of a Gluster volume across disks that have different block sizes. Ensure that you verify the block size of any VDO devices used to host bricks before creating a volume, as the default block size for a VDO device changed from 512 bytes in version 1.6 to 4 KB in version 1.7. Check the block size (in bytes) of a disk by running the following command:

RAID5 and RAID6 configurations are supported. However, RAID configuration limits depend on the technology in use.

As of Red Hat Hyperconverged Infrastructure for Virtualization 1.6, JBOD configurations are fully supported and no longer require architecture review.

The logical volumes that comprise the engine gluster volume must be thick provisioned. This protects the Hosted Engine from out of space conditions, disruptive volume configuration changes, I/O overhead, and migration activity.

The logical volumes that comprise the vmstore and optional data gluster volumes must be thin provisioned. This allows greater flexibility in underlying volume configuration.

If your thin provisioned volumes are on Hard Drive Disks (HDDs), configure a smaller, faster Solid State Disk (SSD) as an lvmcache for improved performance. The cache device must use the same block size as the other volumes.

Disk encryption is supported as of Red Hat Hyperconverged Infrastructure for Virtualization 1.8.

The supported method is Network-Bound Disk Encryption (NBDE), which uses a key server to provide decryption keys to encrypted clients at boot time, avoiding the need to enter the decryption password manually.

NBDE key servers must not be part of the Red Hat Hyperconverged Infrastructure for Virtualization cluster.

NBDE key servers can use either of the following operating systems:

Disk encryption generally involves a small reduction in performance. Test this configuration thoroughly before putting it into production to ensure that it meets the performance requirements of your use case, particularly if you are using disk encryption with other technology that creates a slight reduction in speed, such as deduplication and compression using Virtual Disk Optimization.

A Virtual Data Optimizer (VDO) layer is supported as of Red Hat Hyperconverged Infrastructure for Virtualization 1.6.

VDO support is limited to new deployments only; do not attempt to add a VDO layer to an existing deployment.

Be aware that the default block size for a VDO device changed from 512 bytes in version 1.6 to 4 KB in version 1.7. Do not host the bricks of a Gluster volume across disks that have different block sizes.

Because reducing data has additional processing costs, enabling compression and deduplication reduces write performance. As a result, VDO is not recommended for performance sensitive workloads. Red Hat strongly recommends that you test and verify that your workload achieves the required level of performance with VDO enabled before deploying VDO in production, especially if you are using it in combination with other technology that reduces performance, such as disk encryption.

The number of nodes you can have in an initial deployment depends on your deployment method.

Be aware of the following requirements and limitations when configuring geo-replication:

Two different managers required
The source and destination volumes for geo-replication must be managed by different instances of Red Hat Virtualization Manager.

2.11.2. Prerequisites for failover and failback configuration

Generate and execute Ansible playbooks manually from a separate machine that acts as an Ansible controller node. This node must have the ovirt-ansible-collection package, which provides all required disaster recovery Ansible roles.

Red Hat Hyperconverged Infrastructure for Virtualization is supported for deployment on a single node provided that all Support Requirements are met, with the following additions and exceptions.

A single node deployment requires a physical machine with:

Single node deployments cannot be scaled, and are not highly available. This deployment type is lower cost, but removes the option of availability.