This document outlines how to deploy Red Hat Hyperconverged Infrastructure for Virtualization (RHHI for Virtualization) across three physical machines, using Red Hat Gluster Storage 3.4 and Red Hat Virtualization 4.3. This creates a discrete cluster for use in remote office branch office (ROBO) environments, where a remote office synchronizes data to a central data center on a regular basis, but can remain fully functional if connectivity to the central data center is lost.

The following diagram shows the basic architecture of a single cluster. 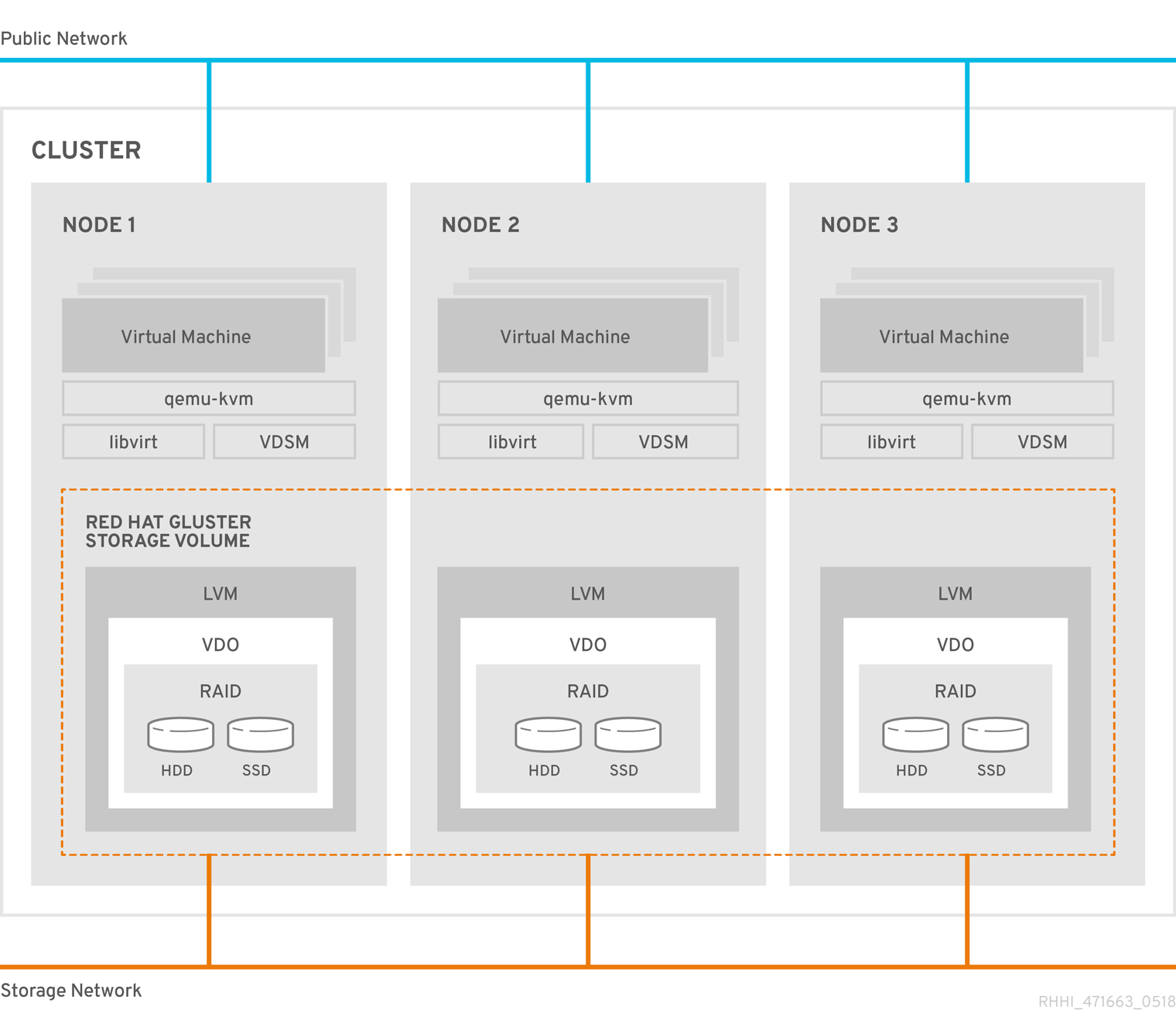 As of Red Hat Hyperconverged Infrastructure for Virtualization 1.6, you can configure a Virtual Data Optimizer (VDO) layer to provide data reduction and deduplication for your storage.

VDO is supported only when enabled on new installations at deployment time, and cannot be enabled on deployments upgraded from earlier versions of RHHI for Virtualization.

Deduplication
Eliminates zero and duplicate data blocks. VDO finds duplicated data using the UDS (Universal Deduplication Service) Kernel Module. Instead of writing the duplicated data, VDO records it as a reference to the original block. The logical block address is mapped to the physical block address by VDO.
Compression
Reduces the size of the data by packing non-duplicate blocks together into fixed length (4 KB) blocks before writing to disk. This helps to speed up the performance for reading data from storage.

At best, data can be reduced to 15% of its original size.

Because reducing data has additional processing costs, enabling compression and deduplication reduces write performance. As a result, VDO is not recommended for performance sensitive workloads. Red Hat strongly recommends that you test and verify that your workload achieves the required level of performance with VDO enabled before deploying VDO in production.

Review this section to ensure that your planned deployment meets the requirements for support by Red Hat.

The following table shows the the supported versions of each product to use for a supported RHHI for Virtualization deployment.

Each physical machine must have the following capabilities:

The Hosted Engine virtual machine requires at least the following:

Fully-qualified domain names that are forward and reverse resolvable by DNS are required for all hyperconverged hosts and for the Hosted Engine virtual machine that provides Red Hat Virtualization Manager.

IPv6 is supported as a Technology Preview in IPv6-only environments (including DNS and gateway addresses). Environments with both IPv4 and IPv6 addresses are not supported.

Client storage traffic and management traffic in the cluster must use separate networks: a front-end management network and a back-end storage network.

Each node requires two Ethernet ports, one for each network. This ensures optimal performance. For high availability, place each network on a separate network switch. For improved fault tolerance, provide a separate power supply for each switch.

If you want to use DHCP network configuration for the Hosted Engine virtual machine, then you must have a DHCP server configured prior to configuring Red Hat Hyperconverged Infrastructure for Virtualization.

If you want to configure disaster recovery by using geo-replication to store copies of data:

Before you begin the deployment process, determine the following details:

A hyperconverged host stores configuration, logs and kernel dumps, and uses its storage as swap space. This section lists the minimum directory sizes for hyperconverged hosts. Red Hat recommends using the default allocations, which use more storage space than these minimums.

Red Hat recommends Solid State Disks (SSDs) for best performance. If you use Hard Drive Disks (HDDs), you should also configure a smaller, faster SSD as an LVM cache volume.

RAID5 and RAID6 configurations are supported. However, RAID configuration limits depend on the technology in use.

As of Red Hat Hyperconverged Infrastructure for Virtualization 1.6, JBOD configurations are fully supported and no longer require architecture review.

The logical volumes that comprise the engine gluster volume must be thick provisioned. This protects the Hosted Engine from out of space conditions, disruptive volume configuration changes, I/O overhead, and migration activity.

The logical volumes that comprise the vmstore and optional data gluster volumes must be thin provisioned. This allows greater flexibility in underlying volume configuration. If your thin provisioned volumes are on Hard Drive Disks (HDDs), configure a smaller, faster Solid State Disk (SSD) as an lvmcache for improved performance.

A Red Hat Hyperconverged Infrastructure for Virtualization deployment can contain at most 1 geo-replicated volume.

A Virtual Data Optimizer (VDO) layer is supported as of Red Hat Hyperconverged Infrastructure for Virtualization 1.6.

VDO support is limited to new deployments only; do not attempt to add a VDO layer to an existing deployment.

Initial deployments of Red Hat Hyperconverged Infrastructure for Virtualization are either 1 node or 3 nodes.

3 node deployments can be scaled to 6, 9, or 12 nodes using one of the following methods:

You cannot create a volume that spans more than 3 nodes at creation time; you must create a 3-node volume first and then expand it across more nodes as necessary.

Bug 1688239 currently prevents IPv6 based geo-replication from working correctly. Do not use IPv6 addresses if you require disaster recovery functionality using geo-replication.

Be aware of the following requirements and limitations when configuring geo-replication:

2.10.2. Prerequisites for failover and failback configuration

Versions must match between environments
Ensure that the primary and secondary environments have the same version of Red Hat Virtualization Manager, with identical data center compatibility versions, cluster compatibility versions, and PostgreSQL versions.
No virtual machine disks in the hosted engine storage domain
The storage domain used by the hosted engine virtual machine is not failed over, so any virtual machine disks in this storage domain will be lost.
Execute Ansible playbooks manually from a separate master node
Generate and execute Ansible playbooks manually from a separate machine that acts as an Ansible master node.

Red Hat Hyperconverged Infrastructure for Virtualization is supported for deployment on a single node provided that all Support Requirements are met, with the following additions and exceptions.

A single node deployment requires a physical machine with:

Single node deployments cannot be scaled, and are not highly available.

The configuration described in this section is not required, but may improve the stability or performance of your deployment.

If your network environment is complex, you may need to configure a host network manually before adding the host to Red Hat Virtualization Manager.

When creating a management bridge that uses a static IPv6 address, disable network manager control in its interface configuration (ifcfg) file before adding a host. See https://access.redhat.com/solutions/3981311 for more information.

Your physical machines need an operating system and access to the appropriate software repositories in order to be used as hyperconverged hosts.

Chapter 5. Configure Public Key based SSH Authentication without a password

Configure public key based SSH authentication without a password for the root user on the first hyperconverged host to all hosts, including itself. Do this for all storage and management interfaces, and for both IP addresses and FQDNs.

When you use SSH to log in to a host from a system that is not already known to the host, you are prompted to add that system as a known host.

Generating a public/private key pair lets you use key-based SSH authentication. Generating a key pair that does not use a password makes it simpler to use Ansible to automate deployment and configuration processes.

To access a host using your private key, that host needs a copy of your public key.

Ensure that disks specified as part of this deployment process do not have any partitions or labels.

If deployment fails, click Clean up to remove any potentially incorrect changes to the system.

When cleanup is complete, click Redeploy. This returns you to the Review and edit configuration tab so that you can correct any issues in the generated configuration file before reattempting deployment.

This section shows you how to deploy the Hosted Engine using the Web Console. Following this process results in Red Hat Virtualization Manager running as a virtual machine on the first physical machine in your deployment. It also configures a Default cluster comprised of the three physical machines, and enables Red Hat Gluster Storage functionality and the virtual-host tuned performance profile for each machine in the cluster.

If your environment uses IPv6 addresses, or if you did not specify additional hyperconverged hosts as part of Configure Red Hat Gluster Storage for Hosted Engine using the Web Console, follow these steps in the Administration Portal for each of the other hyperconverged hosts.

Details on these processes are available in Maintaining Red Hat Hyperconverged Infrastructure for Virtualization.

The log file for the the Web Console based deployment process (documented in Chapter 6, Configure Red Hat Gluster Storage for Hosted Engine using the Web Console) is stored in the /var/log/ansible.log file by default.

If an error occurs during storage deployment, the deployment process halts and &#x24e7; Deployment failed is displayed. 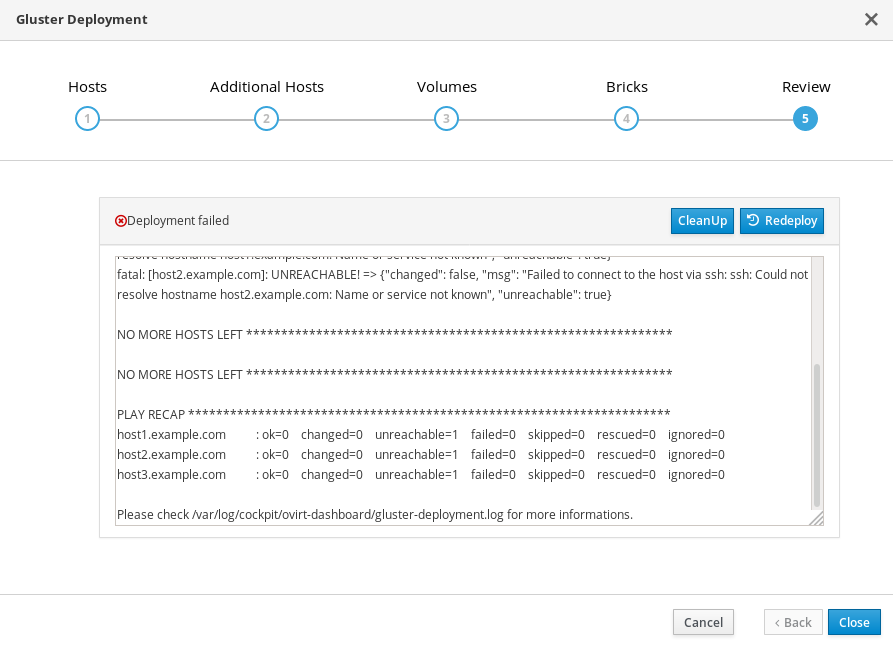 If an error occurs while preparing the virtual machine in Hosted Engine deployment, deployment pauses, and you see a screen similar to the following: 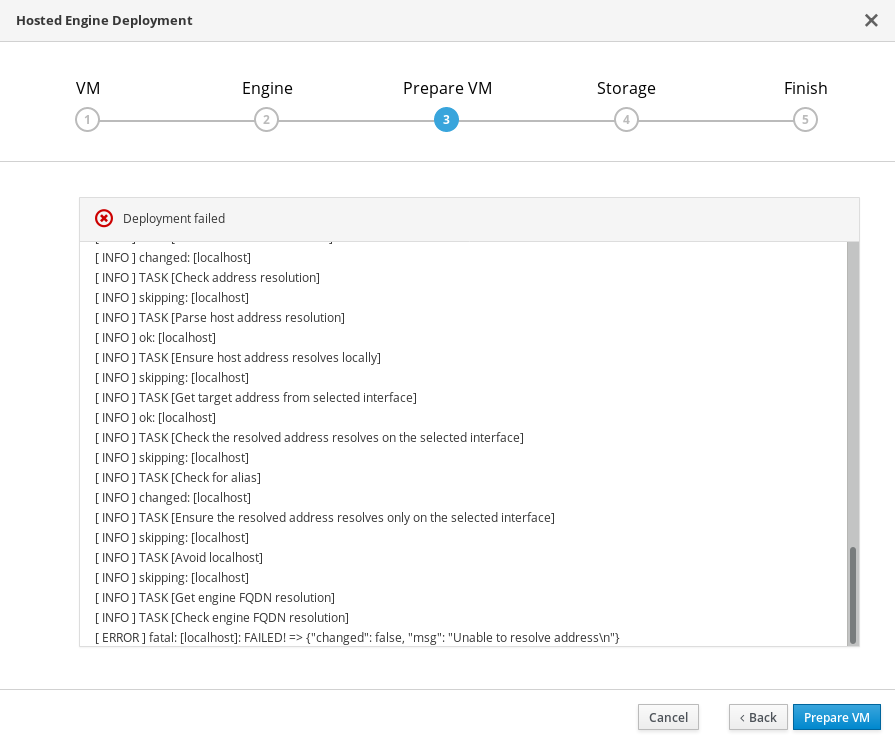 If an error occurs during hosted engine deployment, deployment pauses, and &#x24e7; Deployment failed is displayed. 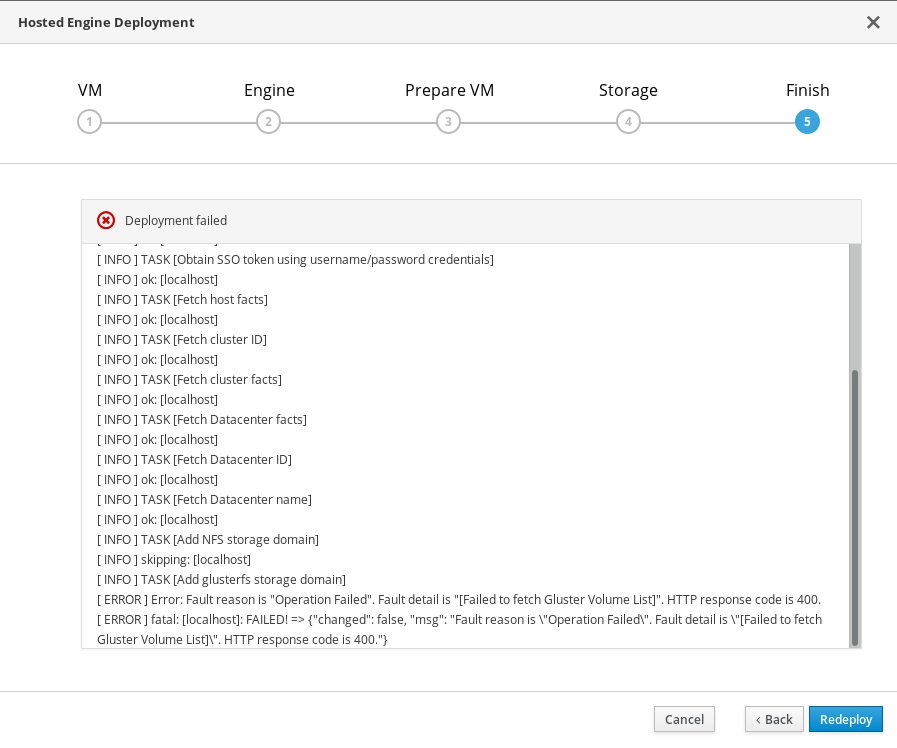 brick
An exported directory on a server in a trusted storage pool.
cache logical volume
A small, fast logical volume used to improve the performance of a large, slow logical volume.
geo-replication
One way asynchronous replication of data from a source Gluster volume to a target volume. Geo-replication works across local and wide area networks as well as the Internet. The target volume can be a Gluster volume in a different trusted storage pool, or another type of storage.
gluster volume
A logical group of bricks that can be configured to distribute, replicate, or disperse data according to workload requirements.
logical volume management (LVM)
A method of combining physical disks into larger virtual partitions. Physical volumes are placed in volume groups to form a pool of storage that can be divided into logical volumes as needed.
Red Hat Gluster Storage
An operating system based on Red Hat Enterprise Linux with additional packages that provide support for distributed, software-defined storage.
source volume
The Gluster volume that data is being copied from during geo-replication.
storage host
A physical machine that provides storage for client access.
target volume
The Gluster volume or other storage volume that data is being copied to during geo-replication.
thin provisioning
Provisioning storage such that only the space that is required is allocated at creation time, with further space being allocated dynamically according to need over time.
thick provisioning
Provisioning storage such that all space is allocated at creation time, regardless of whether that space is required immediately.
trusted storage pool
A group of Red Hat Gluster Storage servers that recognise each other as trusted peers.

Copyright © 2018 Red Hat, Inc.
The text of and illustrations in this document are licensed by Red Hat under a Creative Commons Attribution–Share Alike 3.0 Unported license ("CC-BY-SA"). An explanation of CC-BY-SA is available at http://creativecommons.org/licenses/by-sa/3.0/. In accordance with CC-BY-SA, if you distribute this document or an adaptation of it, you must provide the URL for the original version.
Red Hat, as the licensor of this document, waives the right to enforce, and agrees not to assert, Section 4d of CC-BY-SA to the fullest extent permitted by applicable law.
Red Hat, Red Hat Enterprise Linux, the Shadowman logo, JBoss, MetaMatrix, Fedora, the Infinity Logo, and RHCE are trademarks of Red Hat, Inc., registered in the United States and other countries.
Linux® is the registered trademark of Linus Torvalds in the United States and other countries.
XFS® is a trademark of Silicon Graphics International Corp. or its subsidiaries in the United States and/or other countries.
All other trademarks are the property of their respective owners.