Red Hat Storage Snapshot feature enables you to create point-in-time copies of Red Hat Storage volumes, which you can use to protect data. Users can directly access Snapshot copies which are read-only to recover from accidental deletion, corruption, or modification of the data. 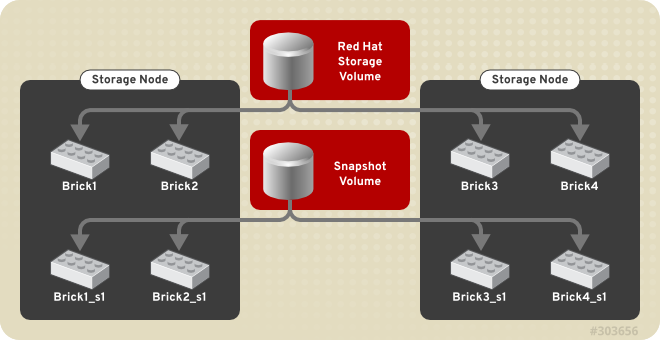 In the Snapshot Architecture diagram, Red Hat Storage volume consists of multiple bricks (Brick1 Brick2 etc) which is spread across one or more nodes and each brick is made up of independent thin Logical Volumes (LV). When a snapshot of a volume is taken, it takes the snapshot of the LV and creates another brick. Brick1_s1 is an identical image of Brick1. Similarly, identical images of each brick is created and these newly created bricks combine together to form a snapshot volume.
Some features of snapshot are:

Taking a snapshot of a Red Hat Storage volume that is hosting the Virtual Machine Images is not recommended. Taking a Hypervisor assisted snapshot of a virtual machine would be more suitable in this use case.

Before using this feature, ensure that the following prerequisites are met:
Recommended Setup
The recommended setup for using Snapshot is described below. In addition, you must ensure to read Chapter 9, Configuring Red Hat Storage for Enhancing Performance for enhancing snapshot performance:
For Example
To create a brick from device /dev/sda1.