Tiering refers to automatic classification and movement of data based on the user I/O access. The tiering feature continuously monitors the workload, identifies hotspots by measuring and analysing the statistics of the activity, and moves frequently accessed data to the highest performance hot tier (such as solid state drives (SSDs)), and inactive data to the lower performing cold tier (such as spinning disks) all without I/O interruption. With tiering, data promotion and automatic rebalancing improve access time for popular files, while demoting infrequently accessed files to the cold tier regulates the hot tier's capacity.

Data is moved, not copied, from one tier to another. When a file is moved to one tier, a copy is not kept on the other tier.
Tiering monitors and identifies the activity level of the data and automatically moves the active and inactive data to the most appropriate storage tier. Moving data between tiers of hot and cold storage is a computationally expensive task. To address this, Red Hat Gluster Storage supports automated promotion and demotion of data within a volume in the background so as to minimize impact on foreground I/O. Data becomes hot or cold based on the rate at which it is accessed. If access to a file increases, it moves to the hot tier or retains its place in the hot tier. If the file is not accessed for a while, it moves to the cold tier, or retains it place in the cold tier. Hence, the data movement can happen in either direction which is based totally on the access frequency.
Different sub-volume types act as hot and cold tiers and data is automatically assigned or reassigned a “temperature” based on the frequency of access. Red Hat Gluster Storage allows attaching fast performing disks as hot tier, uses the existing volume as cold tier, and these hot tier and cold tier forms a single tiered volume. For example, the existing volume may be distributed dispersed on HDDs and the hot tier could be distributed-replicated on SSDs.
Hot Tier

Tiering provides better I/O performance as a subset of the data is stored in the hot tier. Tiering involves creating a pool of relatively fast/expensive storage devices (example, solid state drives) configured to act as a hot tier, and an existing volume which are relatively slower/cheaper devices configured to act as a cold tier. The tiering translator handles where to place the files and when to migrate files from the cold tier to the hot tier and vice versa.
The following diagrams illustrates how tiering works when attached to a distributed-dispersed volume. Here, the existing distributed-dispersed volume would become a cold-tier and the new fast/expensive storage device would act as a hot tier. Frequently accessed files will be migrated from cold tier to the hot tier for better performance. 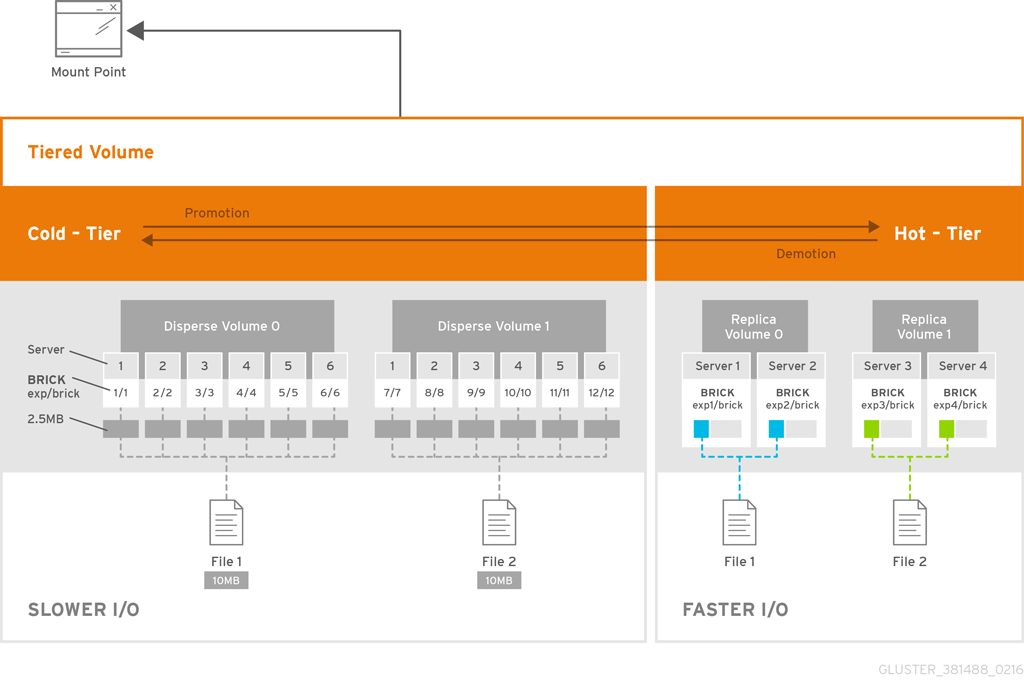