There are a number of infrastructure and architectural factors that determine the potential performance that Red Hat Gluster Storage within Microsoft Azure can deliver.

Microsoft Azure offers two classes of physical storage: standard and premium. Standard storage is backed by hard disk drives, whereas premium storage is delivered by solid state drives. These classes of storage provide an IOPS target of 500 IOPS and 5,000 IOPS per disk, respectively.
A more general consideration is how the data are protected. By default, Microsoft Azure protects the data by synchronously storing three copies of data in separate failure domains, and then asynchronously places another three copies of the data in a secondary datacenter (a default GRS replication scheme).

A simple test was performed using iperf to determine the upper limit between the client and Red Hat Gluster Storage node. This testing showed that a single network interface can be expected to deliver between 600 - 700 Mbit.

Four disks were attached to a Standard Tier/A2 instance and aggregated to form a RAID0 set using the mdadm tool. The LUN was then configured using recommended best practices, based on LVM, dm-thinp, and the XFS file system. The fio tool was then used to reveal the random read profile of the underlying disks at increasing levels of concurrency. 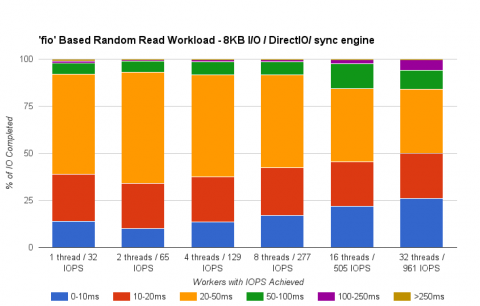 This benchmark does not produce a definitive result, but it indicates the potential I/O profile of the underlying storage.
Observations

The performance tests for Gluster Storage are only indicative and illustrate the expected performance from a similar environment. For the purposes of benchmarking, the smallfile tool has been used to simulate multiple concurrent file creations that are typical of user environments.
The create workload creates a series of 10 MB files within a nested directory hierarchy, exercising metadata operations as well as file creation and throughput. 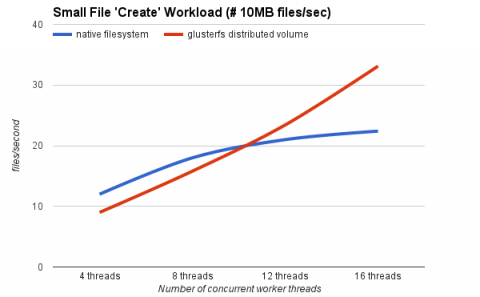 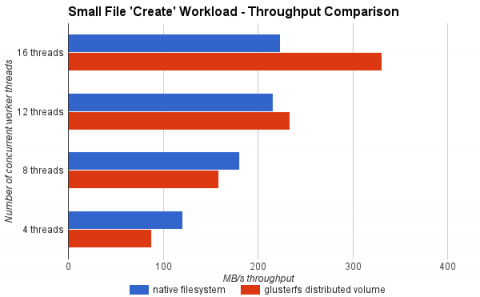