Red Hat Gluster Storage is designed to provide a flexible file services layer for users and applications in a way that can be easily scaled to adjust to your workloads. Deployment flexibility is a key strength of Red Hat Gluster Storage. Gluster can be deployed to virtual or physical servers in on-premise environments, private clouds, and public clouds, including Microsoft Azure.
Integration Architecture

The architecture of Microsoft Azure itself shapes the way solutions are designed. Microsoft Azure offers a cloud service that can function either as a platform-as-a-service (PaaS) or infrastructure-as-a-service (IaaS) environment. For Gluster Storage, the cloud service should be an IaaS layer that provides a logical container to deploy virtual instances to. Within the IaaS container, Microsoft Azure provides network services like DNS and DHCP, which makes managing the virtual instances similar to managing a physical deployment. 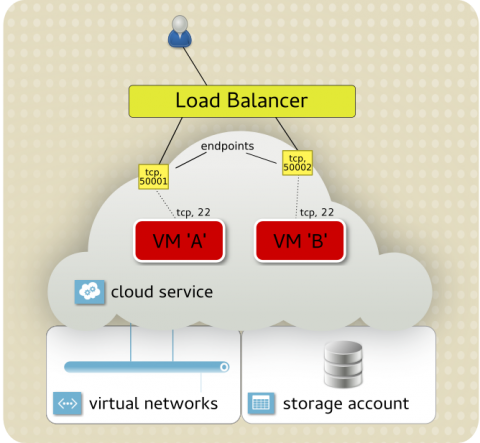 A cloud service is defined by a name, which is a prefix applied to the cloudapp.net domain. Access to instances inside the cloud service is done by specifying the cloud service name and TCP port (endpoint). Most typically, this is SSH access. For example, you may have 30 virtual instances running inside a cloud service, so accessing them individually is done by exposing a different endpoint for each instance: 50,001 links to port 22 on instance A, and 50,002 links to port 22 on instance B.
A virtual network allows greater control and connectivity for instances inside a cloud service. Virtual networks can be configured to function purely within the Microsoft Azure infrastructure or can be used to connect on-premise networks to cloud services through site-to-site VPN connections.
The last key architectural element is the storage account. A storage account provides access to storage services within Microsoft Azure. The account provides a unique namespace for data and supports a number of access protocols, including blob, table, queue, and file. Data can be stored physically either on SSD (premium) or HDD (standard).
The workflow described in this chapter creates Red Hat Gluster Storage cluster. 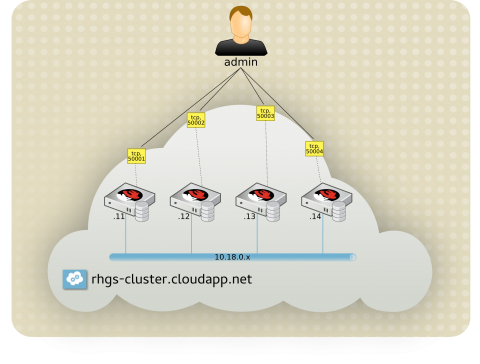 A minimum of two cores is required for each instance of Red Hat Gluster Storage.
In addition to the operating system disk, Microsoft Azure also allocates every instance a resource disk. This is a non-persistent (ephemeral) disk, provided at runtime to the instance from the local storage on the physical host the instance is running on. The resource disk is visible at /mnt/resource and is configured by the Windows Azure Linux Agent to provide swap space and temporary storage for applications.
For each instance type, the Microsoft Azure portal shows a clear indication of the CPU core count and RAM, but it does not show the number of configurable disks that each instance supports. The number of configurable data disks ranges between 1 and 32, dependent upon the instance type.
Since Red Hat Gluster Storage is a storage platform, there are some additional planning considerations when sizing instances: