Split-brain is a state when a data or availability inconsistencies originating from the maintenance of two separate data sets with overlap in scope, either because of servers in a network design, or a failure condition based on servers not communicating and synchronizing their data to each other.
In Red Hat Gluster Storage, split-brain is a term applicable to Red Hat Gluster Storage volumes in a replicate configuration. A file is said to be in split-brain when the copies of the same file in different bricks that constitute the replica-pair have mismatching data and/or meta-data contents such that they are conflicting each other and automatic healing is not possible. In this scenario, you can decide which is the correct file (source) and which is the one that require healing (sink) by inspecting at the mismatching files from the backend bricks.
The AFR translator in glusterFS makes use of extended attributes to keep track of the operations on a file. These attributes determine which brick is the source and which brick is the sink for a file that require healing. If the files are clean, the extended attributes are all zeroes indicating that no heal is necessary. When a heal is required, they are marked in such a way that there is a distinguishable source and sink and the heal can happen automatically. But, when a split brain occurs, these extended attributes are marked in such a way that both bricks mark themselves as sources, making automatic healing impossible.
When a split-brain occurs, applications cannot perform certain operations like read and write on the file. Accessing the files results in the application receiving an Input/Output Error.
The three types of split-brains that occur in Red Hat Gluster Storage are:
The only way to resolve split-brains is by manually inspecting the file contents from the backend and deciding which is the true copy (source ) and modifying the appropriate extended attributes such that healing can happen automatically.

To prevent split-brain in the trusted storage pool, you must configure server-side and client-side quorum.

For a two-node trusted storage pool, it is important to set the quorum ratio to be greater than 50% so that two nodes separated from each other do not both believe they have a quorum.
For a replicated volume with two nodes and one brick on each machine, if the server-side quorum is enabled and one of the nodes goes offline, the other node will also be taken offline because of the quorum configuration. As a result, the high availability provided by the replication is ineffective. To prevent this situation, a dummy node can be added to the trusted storage pool which does not contain any bricks. This ensures that even if one of the nodes which contains data goes offline, the other node will remain online. Note that if the dummy node and one of the data nodes goes offline, the brick on other node will be also be taken offline, and will result in data unavailability. 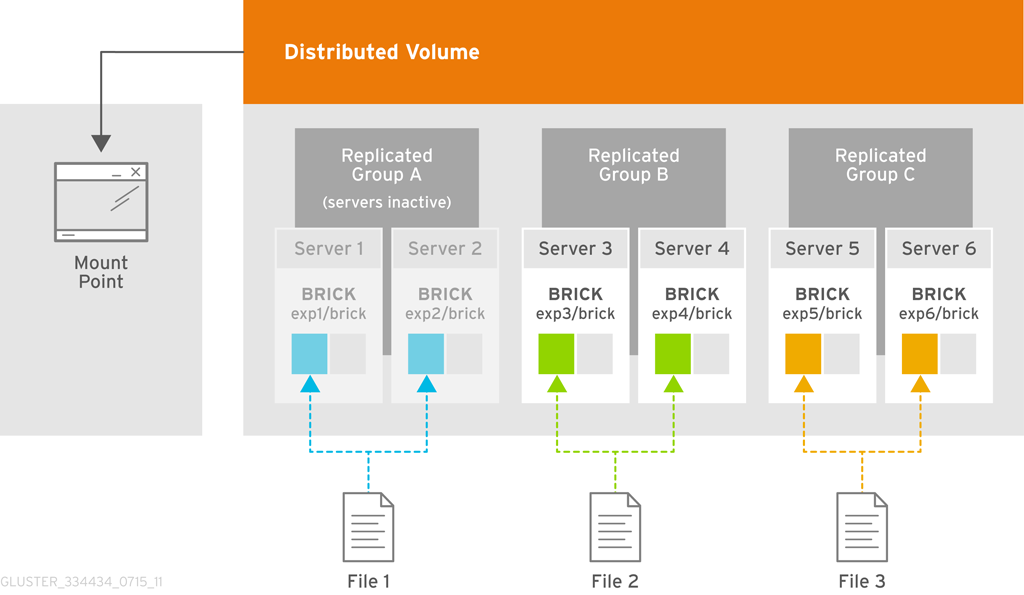 In the above scenario, when the client-side quorum is not met for replica group A, only replica group A becomes read-only. Replica groups B and C continue to allow data modifications.

When you integrate Red Hat Gluster Storage with Red Hat Enterprise Virtualization or Red Hat OpenStack, the client-side quorum is enabled when you run gluster volume set VOLNAME group virt command. If on a two replica set up, if the first brick in the replica pair is offline, virtual machines will be paused because quorum is not met and writes are disallowed.
Consistency is achieved at the cost of fault tolerance. If fault-tolerance is preferred over consistency, disable client-side quorum with the following command:
Example - Setting up server-side and client-side quorum to avoid split-brain scenario

Setting Server-side Quorum
Enable the quorum on a particular volume to participate in the server-side quorum by running the following command:
Set the quorum to 51% of the trusted storage pool:
In this example, the quorum ratio setting of 51% means that more than half of the nodes in the trusted storage pool must be online and have network connectivity between them at any given time. If a network disconnect happens to the storage pool, then the bricks running on those nodes are stopped to prevent further writes.
Setting Client-side Quorum
Set the quorum-typeoption to auto to allow writes to the file only if the percentage of active replicate bricks is more than 50% of the total number of bricks that constitute that replica.
In this example, as there are only two bricks in the replica pair, the first brick must be up and running to allow writes.

You can recover from the data and meta-data split-brain using one of the following methods:
For information on resolving gfid/entry split-brain, see Chapter 30, Manually Recovering File Split-brain .

Steps to recover from a split-brain from the mount point

You can resolve the split-brin from the gluster CLI by the following ways:

This method is useful for per file healing and where you can decided that the file with bigger size is to be considered as source.

After the healing is complete, the md5sum and file size on both bricks must be same. The following is a sample output of the stat and md5 checksums command after completion of healing the file.
Selecting one replica as source for a particular file

This method is useful if you know which file is to be considered as source.

Selecting one replica as source for all files

This method is useful if you know want to use a particular brick as a source for the split-brain files in that replica pair.

For replicated volumes, when a brick goes offline and comes back online, self-healing is required to re-sync all the replicas. There is a self-heal daemon which runs in the background, and automatically initiates self-healing every 10 minutes on any files which require healing.
There are various commands that can be used to check the healing status of volumes and files, or to manually initiate healing: