3.1. What transaction managers do

A transaction manager can be local, global, or distributed.

It is important to understand what constitutes a resource, in this context. For example, if you are using a JMS product, the JMS resource is the single running instance of the JMS product, not the individual queues and topics. Moreover, sometimes, what appears to be multiple resources might actually be a single resource, if the same underlying resource is accessed in different ways. For example, your application might access a relational database both directly (through JDBC) and indirectly (through an object-relational mapping tool like Hibernate). In this case, the same underlying transaction manager is involved, so it should be possible to enroll both of these code fragments in the same transaction.

It cannot be guaranteed that this will work in every case. Although it is possible in principle, some detail in the design of the Spring Framework or other wrapper layers might prevent it from working in practice.

It is possible for an application to have many different local transaction managers working independently of each other. For example, you could have one Camel route that manipulates JMS queues and topics, where the JMS endpoints reference a JMS transaction manager. Another route could access a relational database through JDBC. But you could not combine JDBC and JMS access in the same route and have them both participate in the same transaction.

The following are the prerequisites for transactions that operate on multiple resources:

The Spring Framework does not by itself provide a TP monitor to manage global transactions. It does, however, provide support for integrating with an OSGi-provided TP monitor or with a JavaEE-provided TP monitor (where the integration is implemented by the JtaTransactionManager class). Hence, if you deploy your application into an OSGi container with full transaction support, you can use multiple transactional resources in Spring.

Usually, a server connects directly to the resources involved in a transaction. In a distributed system, however, it is occasionally necessary to connect to resources that are exposed only indirectly, through a Web service. In this case, you require a TP monitor that is capable of supporting distributed transactions. Several standards are available that describe how to support transactions for various distributed protocols, for example, the WS-AtomicTransactions specification for Web services.

When using JavaEE, the most fundamantal and standard method to interact with a transaction manager is the Java Transaction API (JTA) interface, javax.transaction.UserTransaction. The canonical usage is:

The figure shows that both Camel code and application code may access:

When using a javax.transaction.UserTransaction object, you do not need to be aware of the actual transaction manager that is being used because you are working directly with only the transaction client. (See Section 1.3, “About transaction clients”.) A different approach is taken by Spring and Camel, as it uses Spring’s transaction facilities internally.

These represent the code that performs JMS/JDBC operations. Camel has its own advanced methods to access JMS/JDBC resources. The application code may use a given API directly.

This is the javax.sql.DataSource interface that is used to obtain instances of java.sql.Connection. As with JMS, this data source may be used directly or indirectly. For example, the camel-sql component uses the org.springframework.jdbc.core.JdbcTemplate class internally. As with JMS, neither application code nor Camel require the details of this data source. The configuration is done inside the application server or inside the OSGi server by using methods that are described in Chapter 4, Configuring the Narayana transaction manager.

One of the main goals of the Spring Framework (and Spring Boot) is to make JavaEE APIs easier to use. All major JavaEE vanilla APIs have their part in the Spring Framework (Spring Boot). These are not alternatives or replacements of given APIs, but rather wrappers that add more configuration options or more consistent usage, for example, with respect to exception handling.

The following table matches a given JavaEE API with its Spring-related interface:

JdbcTemplate and JmsTemplate directly use javax.sql.DataSource and javax.jms.ConnectionFactory respectively. But TransactionTemplate uses the Spring interface of PlatformTransactionManager. This is where Spring does not simply improve JavaEE, but replaces the JavaEE client API with its own.

Following is the canonical API usage of Spring Boot:

In the above example, all three kinds of templates are simply instantiated, but they may also be obtained from Spring’s ApplicationContext, or injected by using @Autowired annotations.

As mentioned earlier, javax.transaction.UserTransaction is usually obtained from JNDI in a JavaEE application. But Spring provides explicit implementations of this interface for many scenarios. You do not always need full JTA scenarios and sometimes an application requires access to just a single resource, for example, JDBC.

3.4.1.1. Definition of the PlatformTransactionManager interface

3.4.1.3. Definition of the TransactionStatus interface

3.4.1.4. Methods defined by the PlatformTransactionManager interface

3.4.2. Steps for using the transaction manager

Usually, you do not use the PlatformTransactionManager interface directly. In Apache Camel, you typically use a transaction manager as follows:

As you can see, you must have some implementation of this interface. Depending on the scenario, you can configure the required platform transaction manager.

There are also other, less frequently used, implementations of PlatformTransactionManager.

In the above example, the actual instances of JTA objects (UserTransaction and TransactionManager) are taken from JNDI. In OSGi, they may as well be obtained from the OSGi service registry.

In the same way that applications that are deployed in a JavaEE application server obtain references to javax.transaction.UserTransaction by using JNDI (service locator method) or get them injected by CDI (dependency injection method), in OSGi you can obtain the same references (directly or indirectly) in any of the following ways:

The following figure shows a Fuse application that is deployed in the OSGi runtime. Application code and/or Camel components use their APIs to obtain references to the transaction manager, data sources, and connection factories. 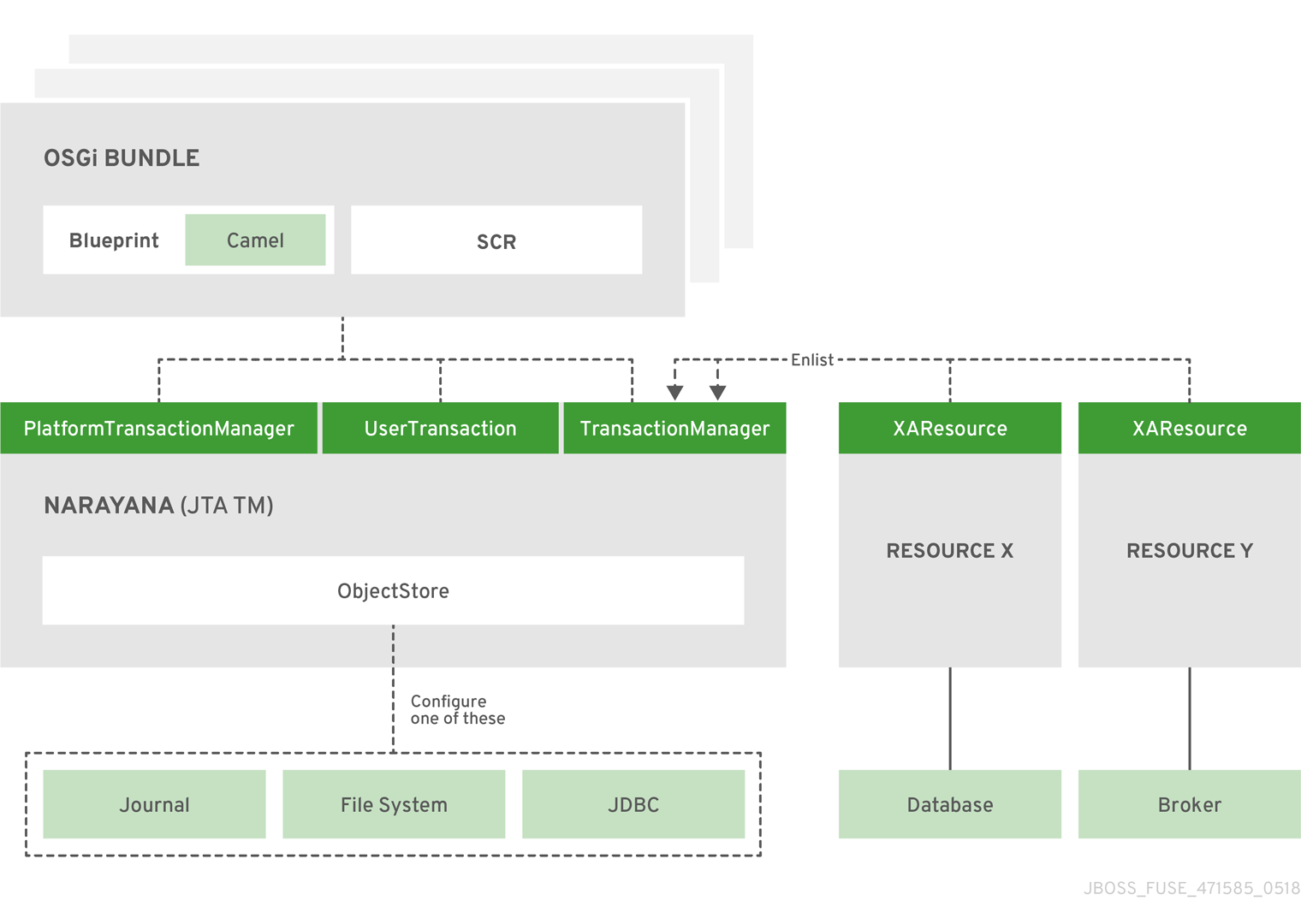 Applications (bundles) interact with services that are registered in the OSGi registry. The access is performed through interfaces and this is all that should be relevant to applications.

In Fuse, the fundamental object that implements (directly or through a tiny wrapper) transactional client interfaces is org.jboss.narayana.osgi.jta.internal.OsgiTransactionManager. You can use the following interfaces to access the transaction manager:

You can use any of these interfaces directly or you can use them implicitly by choosing a framework or library, such as Camel.

For information about the ways to configure org.jboss.narayana.osgi.jta.internal.OsgiTransactionManager in Fuse, see Chapter 4, Configuring the Narayana transaction manager. Later chapters in this guide build on the information in that chapter and describe how to configure and use other services, such as JDBC data sources and JMS connection factories.