This guide describes how to install and get started with the low-latency real-time kernel in RHEL 9.

Red Hat is committed to replacing problematic language in our code, documentation, and web properties. We are beginning with these four terms: master, slave, blacklist, and whitelist. Because of the enormity of this endeavor, these changes will be implemented gradually over several upcoming releases. For more details, see our CTO Chris Wright’s message.

We appreciate your feedback on our documentation. Let us know how we can improve it.

Many industries and organizations need extremely high performance computing and may require low and predictable latency, especially in the financial and telecommunications industries. Latency, or response time, is defined as the time between an event and system response and is generally measured in microseconds (μs).

For most applications running under a Linux environment, basic performance tuning can improve latency sufficiently. For those industries where latency not only needs to be low, but also accountable and predictable, Red Hat developed a 'drop-in' kernel replacement that provides this. RHEL for Real Time is distributed as part of RHEL 9 and provides seamless integration with RHEL 9. RHEL for Real Time offers clients the opportunity to measure, configure, and record latency times within their organization.

Before installing RHEL for Real Time, ensure that the base platform is properly tuned and the system BIOS parameters are adjusted. Failure to perform these tasks may prevent getting consistent performance from a RHEL Real Time deployment.

RHEL for Real Time is designed to be used on well-tuned systems for applications with extremely high determinism requirements. Kernel system tuning offers the vast majority of the improvement in determinism.

For example, in many workloads, thorough system tuning improves consistency of results by around 90%. This is why, before using RHEL for Real Time, we recommend that customers first perform system tuning of standard RHEL to see if it meets their objectives.

Before tuning Real Time kernel systems, ensure that the base platform is properly tuned and the system BIOS parameters are adjusted. Failure to perform these tasks may prevent getting consistent performance from a RHEL Real Time deployment.

The objective of the Real Time kernel consistent, low-latency determinism offering predictable response times. There is some additional kernel overhead associated with the real time kernel. This is due primarily to handling hardware interrupts in separately scheduled threads. The increased overhead in some workloads results in some degradation in overall throughput. The exact amount is very workload dependent, ranging from 0% to 30%.

For typical workloads with kernel latency requirements in the millisecond (ms) range, the standard RHEL 9 kernel is sufficient. However,if your workload has stringent low-latency determinism requirements for core kernel features such as interrupt handling and process scheduling in the microsecond (μs) range, then the Real Time kernel is for you. 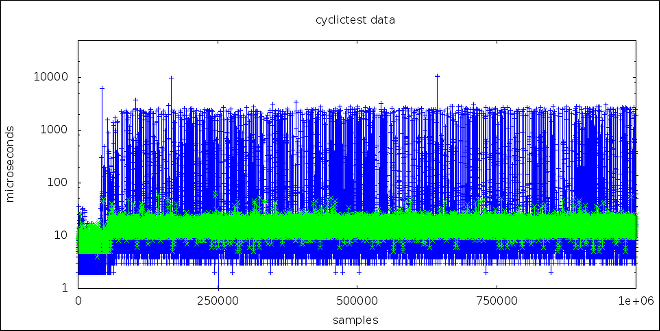 This graph compares a million samples of machines that use the RHEL 9 and the RHEL for Real Time kernel, respectively.

It is clear from this graph that the response time of the Real Time kernel is very consistent, in contrast to the standard kernel, which has greater variability.

To install RHEL 9 for Real Time on your system, you can use the yum package manager.

When the RHEL for Real Time kernel is installed, it is automatically set to be the default kernel and is used on the next boot.

1.3. Available RPM packages in the RHEL for Real Time repository

This section lists the RPM packages available in the RHEL for Real Time repository.

The following packages contain test programs for use with RHEL for Real Time.

The following set of packages are provided for use with the perf, trace-cmd, and crash utilities for analyzing kernel crash dumps. The debugging packages consist of symbol tables and are quite large. For this reason, they are separately delivered from the other RHEL for Real Time packages.

These packages can be found and downloaded from the RHEL for Real Time - Debug RPMs repository.

After you install RHEL for Real Time ensure that:

Module Compatibility of the Real Time Kernel and the Standard Kernel

Kernel modules are inherently specific to the kernel they are built for. The real time kernel is substantially different from the standard kernel, and so are the modules.

The following are some example third-party drivers which ship for standard Red Hat Enterprise Linux 9 but do not currently have a custom build for RHEL for Real Time:

The user space syscall interface is compatible with RHEL for Real Time.

Identifying which kernel, the RHEL for Real Time or the standard kernel, is causing the problem might increase the chances of getting your bug fixed. This section covers information on how to diagnose a bug and report it.

This procedure guides you how to diagnose where the problem has occurred before you file a bug report.

If the problem does not occur with the standard kernel, then the bug is probably the result of changes introduced in the RHEL for Real Time specific enhancements, which Red Hat has applied on top of the baseline (4.18.0) kernel.

2.2. Submitting a bug report with Bugzilla

If you have determined that the bug is specific to Red Hat Enterprise Linux for Real Time follow the instructions in this section to submit a bug report: