Linux Containers have emerged as a key open source application packaging and delivery technology, combining lightweight application isolation with the flexibility of image-based deployment methods. Red Hat Enterprise Linux 7 implements Linux Containers using core technologies such as Control Groups (Cgroups) for Resource Management, Namespaces for Process Isolation, SELinux for Security, enabling secure multi-tenancy and reducing the potential for security exploits. All this is meant to provide you with an environment to producing and running enterprise-quality containers.

To help you get started using containers, this guide lays out key elements of Linux Containers as they are implemented in Red Hat systems. It also helps understand containers by contrasting them with similar technologies, such as virtual machines. Once you have a grasp of the general features of containers, you can try out a variety of Linux Container features on RHEL Server and RHEL Atomic Host systems by referring to the following documents to begin working with containers:

When you are ready for a full-blown Linux Container experience, refer to documentation associated with the following technologies:

Several components are needed for Linux Containers to function correctly, most of them are provided by the Linux kernel. Kernel namespaces ensure process isolation and cgroups are employed to control the system resources. SELinux is used to assure separation between the host and the container and also between the individual containers. Management interface forms a higher layer that interacts with the aforementioned kernel components and provides tools for construction and management of containers. 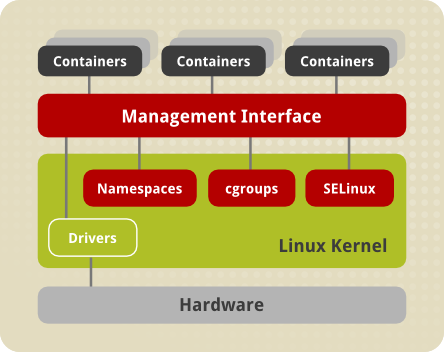 The kernel provides process isolation by creating separate namespaces for containers. Namespaces enable creating an abstraction of a particular global system resource and make it appear as a separated instance to processes within a namespace. Consequently, several containers can use the same resource simultaneously without creating a conflict. There are several types of namespaces:

From the security point of view, there is a need to isolate the host system from a container and to isolate containers from each other. The kernel features used by containers, namely cgroups and namespaces, by themselves provide a certain level of security. Cgroups ensure that a single container cannot exhaust a large amount of system resources, thus preventing some denial-of-service attacks. By virtue of namespaces, the /dev directory created within a container is private to each container, and therefore unaffected by the host changes. However, this can not prevent a hostile process from breaking out of the container since the entire system is not namespaced or containerized. Another level of separation, provided by SELinux, is therefore needed.

Security-Enhanced Linux (SELinux) is an implementation of a mandatory access control (MAC) mechanism, multi-level security (MLS), and multi-category security (MCS) in the Linux kernel. The sVirt project builds upon SELinux and integrates with Libvirt to provide a MAC framework for virtual machines and containers. This architecture provides a secure separation for containers as it prevents root processes within the container from interfering with other processes running outside this container. The containers created with Docker are automatically assigned with an SELinux context specified in the SELinux policy.

By default, containers created with libvirt tools are assigned with the virtd_lxc_t label (execute ps -eZ | grep virtd_lxc_t). You can apply sVirt by setting static or dynamic labeling for processes inside the container.

You might notice that SELinux appears to be disabled inside the container even though it is running in enforcing mode on host system – you can verify this by executing the getenforce command on host and in the container. This is to prevent utilities that have SELinux awareness, such as setenforce, to perform any SELinux activity inside the container.

Note that currently it is not possible to run containers with SELinux enabled on the B-tree file system (Btrfs). Therefore, to use Docker with SELinux enabled, which is highly recommended, make sure the /var/lib/docker is not placed on Btrfs. In case you need to run Docker on Btrfs, disable SElinux by removing the --selinux-enabled entry from the /lib/systemd/system/docker.service configuration file.

Image-based containers package applications with individual runtime stacks, making the resultant containers independent from the host operating system. This makes it possible to run several instances of an application, each developed for a different platform. This is possible because the container run time and the application run time are deployed in the form of an image. For example, Runtime A could refer to Red Hat Enterprise Linux 6.5, Runtime B could refer to version 6.6 and so on. 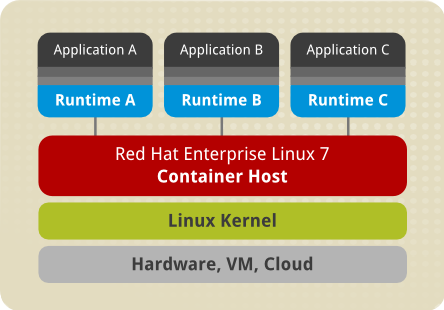 Image-based containers allow you to host multiple instances and versions of an application, with minimal overhead and increased flexibility. Such containers are not tied to the host-specific configuration, which makes them portable.

Docker format relies on the device mapper thin provisioning technology that is an advanced variation of LVM snapshots to implement copy-on-write in Red Hat Enterprise Linux 7. 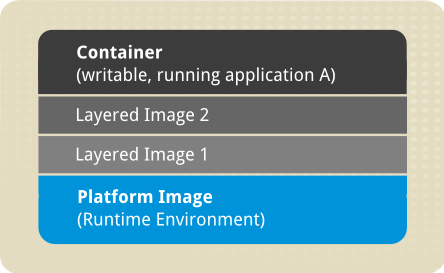 The above image shows the fundamental components of any image-based container:

The whole container can be very large or it could be made really small depending on how many packages are included in the application layer. Further layering of the images is possible, such as software from 3rd party independent software vendors. From a user point of view there is still one container, but from an operational point of view there can be many layers behind it.

Both Linux Containers and KVM virtualization have certain advantages and drawbacks that influence the use cases in which these technologies are typically applied:

To learn more about general principles and architecture of Linux Containers, refer to the following resources.