Getting Started with Cockpit

Getting Started with Cockpit

Get started using the Cockpit system administration tool for your servers

Cockpit is a system administration tool that provides a user interface for monitoring and administering servers through a web browser. It allows you to monitor current values and adjust limits on system resources, control life cycle on container instances, and manipulate container images. Here are a few important facts about Cockpit:

This document provides instructions on how to install and enable Cockpit so you can monitor your servers, describes basic configuration, and walks you through the interface.

2.1. Setting up a Cockpit server

Afterwards, you can log into Cockpit. Go to Opening The Interface

B. On Red Hat Enterprise Linux

If there is an account on your Atomic system that has an expired password, you can change it from Cockpit. For example, if you have provisioned your system using cloud-init to set up an expired password, you will be prompted to change it the first time you log into the system. It can also be used by system administrators who want to make sure the user changes his password on the first login.

If you can’t log into Cockpit and you are not redirected to the changing password screen, check the /etc/ssh/sshd_config file on the Cockpit Server and make sure the ChallengeResponseAuthentication line is set to yes. After that, restart sshd with the systemctl restart sshd command.

These two components can be built in many different ways depending on the infrastructure of your particular company. When you have these two set up, you will need to do the following things:

When you open Cockpit’s interface, and enter your password, you will then be prompted to enter your Verification code:

3.1. Getting to know the Cockpit interface

Once you have logged in, you will see the tabs for the Dashboard and the individual machines added to Cockpit.

Dashboard: Shows a list of all systems added to the Cockpit server with graphs for CPU usage, memory usage, disk I/O, and network traffic. 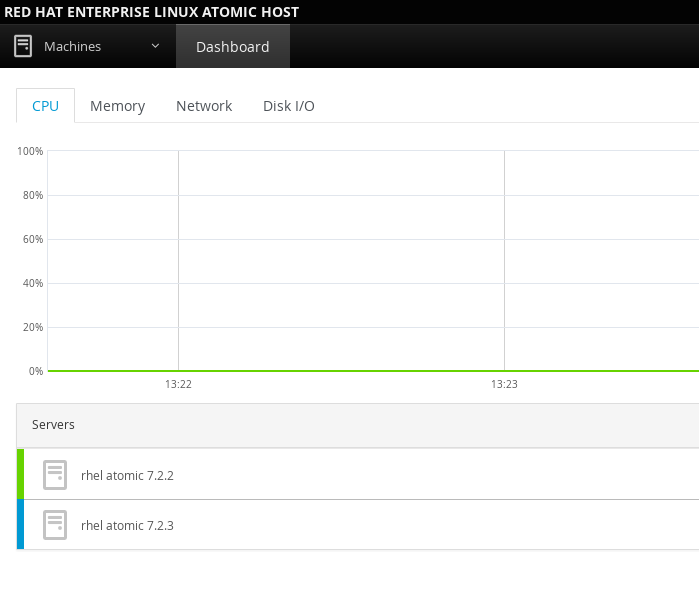 You can then select a system name, in this case "rhel atomic 7.2.3", and have a look at the side menu:

System: Shows information about the system that Cockpit is running on. This includes CPU usage, memory usage, disk I/O, and network traffic, as well as hardware and operating system details. 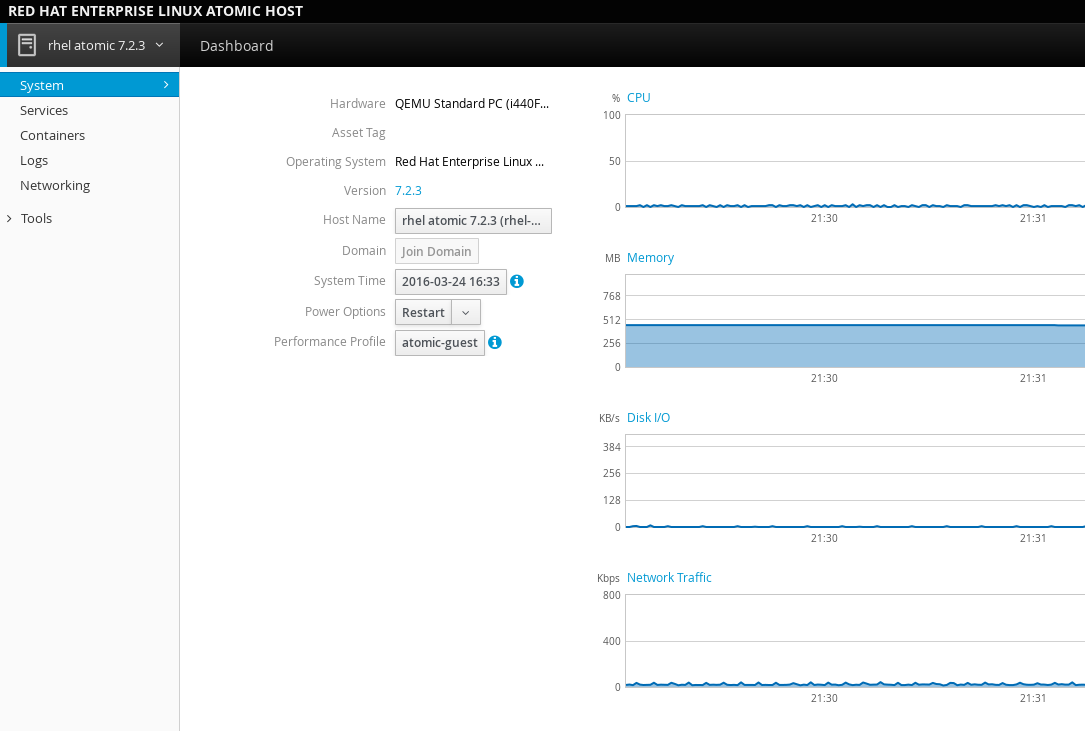 Services: Shows the systemd services running on the Cockpit server. You can see which are active/enabled or inactive. You can also see other systemd features: Targets, sockets, timers, and paths.

Select a service to view its details: 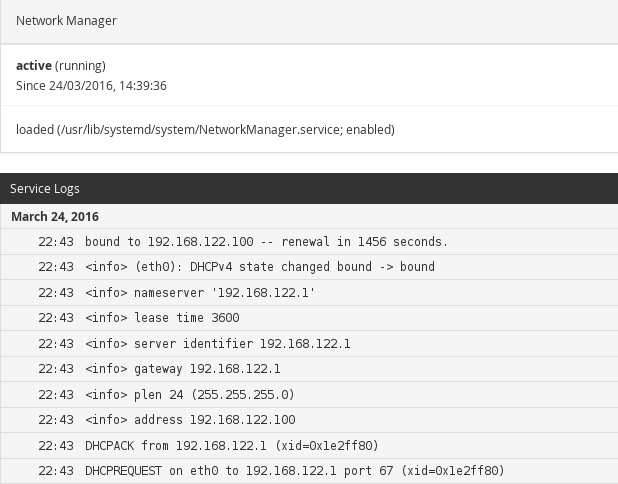 Containers: Lists all images available on the system, all running and non-running containers, combined CPU & memory usage graphs, and a storage usage bar.

Logs: See messages produced by the systemd journal. These are errors, warnings, and notices that are generated by systemd services and gathered by the journal (like the output of the journalctl command). Errors are listed by the date they occurred. You can also view warnings, notices, or all messages. 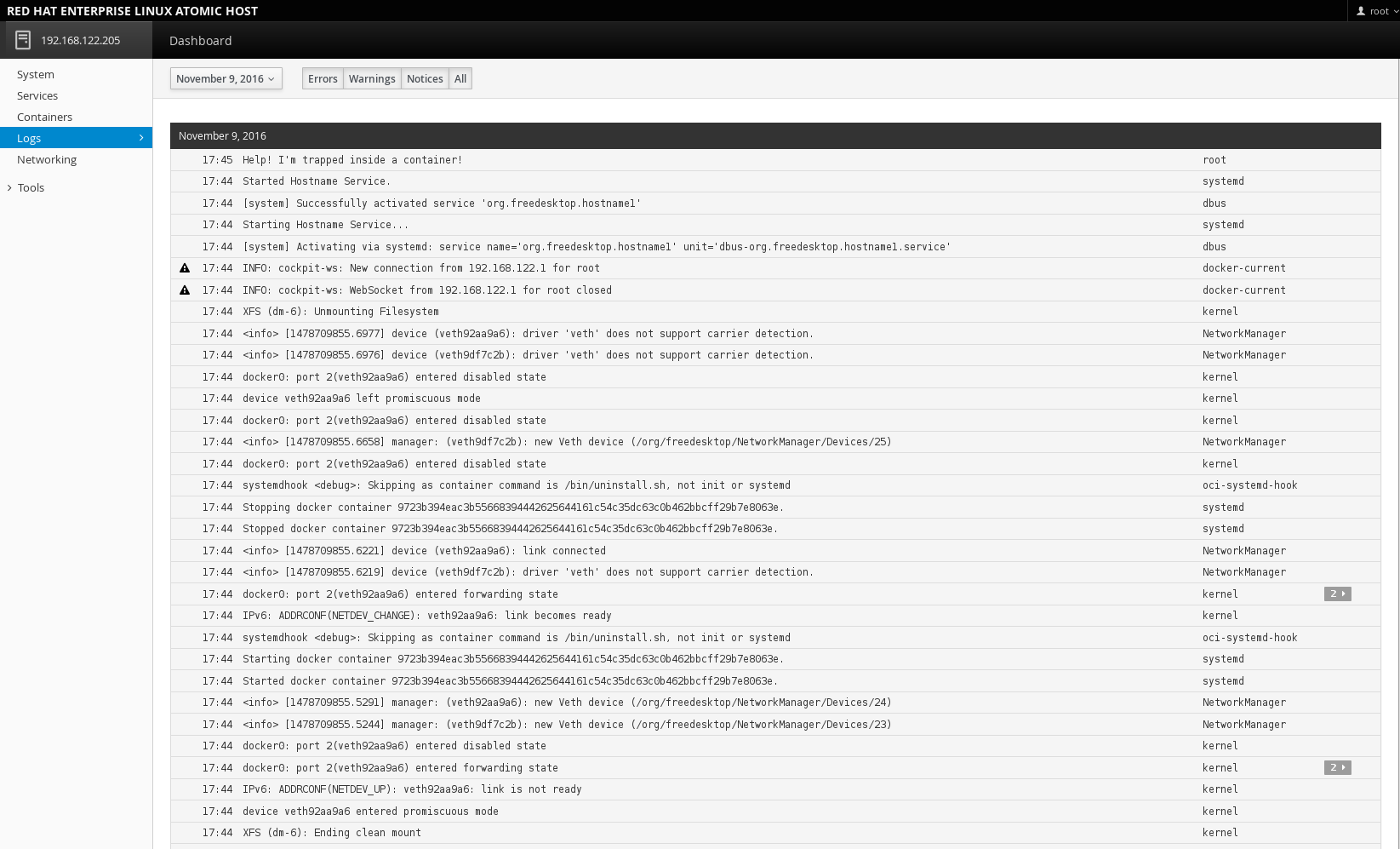 Networking: See networking interfaces (eth0, docker0, etc.) as well as the amount of data being sent and received. 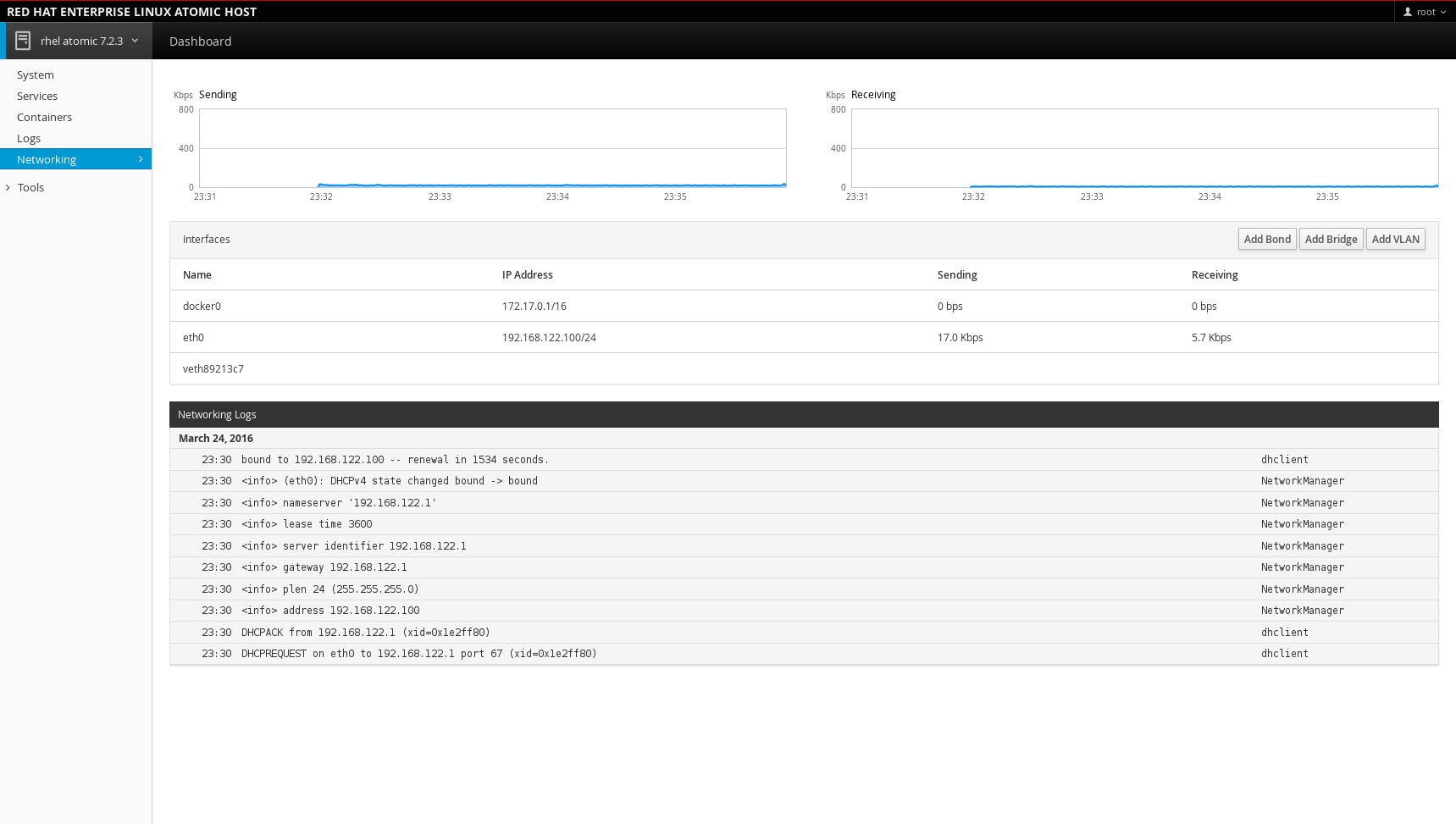 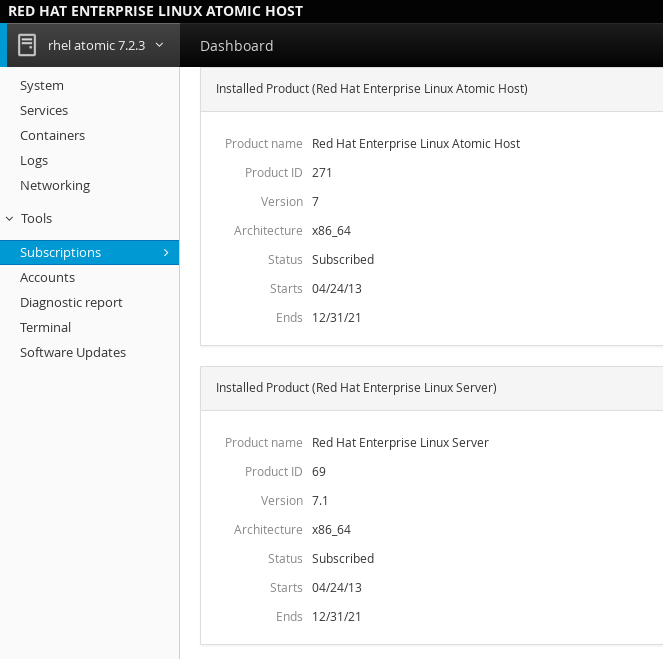 You can then download the report locally on your system:

3.1.1. Adding another system to monitor

Once you log in to the primary server, you will be able to connect to additional servers. These secondary systems need to have:

The cockpit-ws component is not necessary on these additional systems.

From the "Dashboard" tab next to the system name, choose the "plus" button to add a new host. You can then add the IP of the secondary machine and choose which color will represent it in the user interface.

Select the user name and type in the password:

If you have keys generated on the primary server, you need to add them to the target server, in the ~/.ssh/authorized_keys file. If you do not have keys, use the following command:

Next, copy the contents of the ~/.ssh/id_rsa.pub file to the ~/.ssh/authorized_keys file on the target server. Then, return to the user interface on the primary server, click the top right corner menu with the user name on it, choose Authentication, and enable the preloaded key. 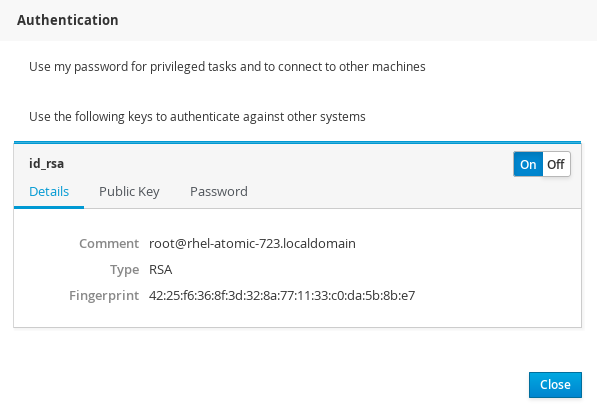 After you type in the IP when adding the new system to the Dashboard, change the Authentication type to Use available credentials.

3.1.2. Logging to other systems through Cockpit

On the login screen, you can also choose an alternate host to connect to. Type in your username and password from that alternate host, then click Other Options, in the entry field type the IP address of the new host, and click Log In. You will be prompted for the SSH fingerprint, click Log In again, and you will be able to browse the new system. Cockpit uses SSH to authenticate you against that host, and you do not need to configure anything additionally on the new system. As a prerequisite, it will need to have SSH listening on port 443, and the cockpit-bridge package installed and the same version as in the Cockpit server.

As a prerequisite, it will need to have SSH listening on port 443, and the cockpit-bridge package installed and the same version as in the Cockpit server. If the new machine is not known to Cockpit, and you get the Refusing to connect. Host is unknown use the following command to allow connections from unknown hosts:

3.2. Logging into a system via a Bastion Host

On the Cockpit login screen you can now choose an alternate host to connect to. Cockpit with use SSH to authenticate you against that host, and display the admin interface for that host.

Although browsers cannot use SSH directly to connect to machines or authenticate against them, Cockpit can make this happen. Only one host needs to have Cockpit listen on port 9090 available to browsers over TLS, and other hosts can only have SSH accessible on the usual port 22.

The Containers tab presents you with a UI to interact with your images and containers. Apart from the system resources graphs, there are lists of all images you have locally on the system as well as all running and non-running containers. 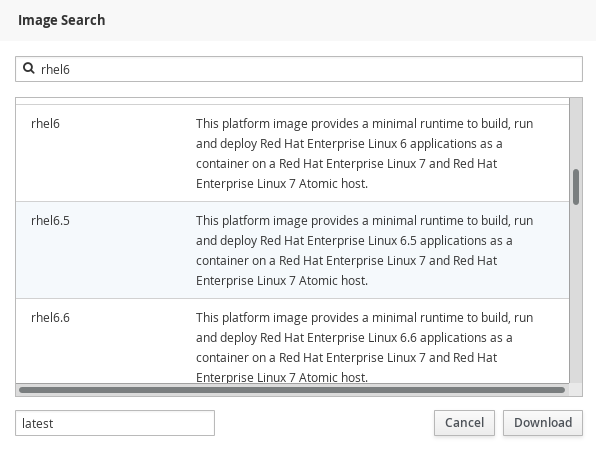 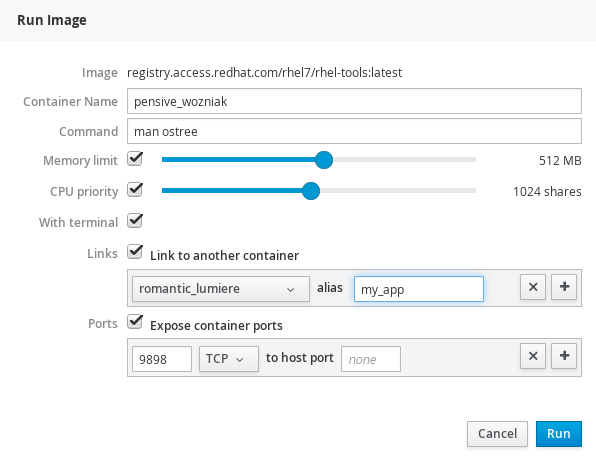 You can select which command the container should run, and you can also link that container to other containers, which will allow them to interact. In addition, you can expose a port when you want a specific service to be visible from the host.

B: On Red Hat Enterprise Linux:

Create the /etc/systemd/system/websocket.cockpit.d/listen.conf file and, if needed, the preceding directories.

Next, allow the new port through the firewall:

If you have SELinux enabled, change the default SELinux policy to allow the websm_port_t domain to listen on the TCP 9898 port:

If the port is already defined by some other part of the SELinux policy, use the -m argument instead of -a to modify the definition:

In order for the changes to take effect, run the following commands:

You can now use the address with the newly assigned port in the web browser.

You can add more features to Cockpit that are not in Atomic by default using package layering.