Local storage implies that the storage devices are either installed on the system or directly attached to the system. 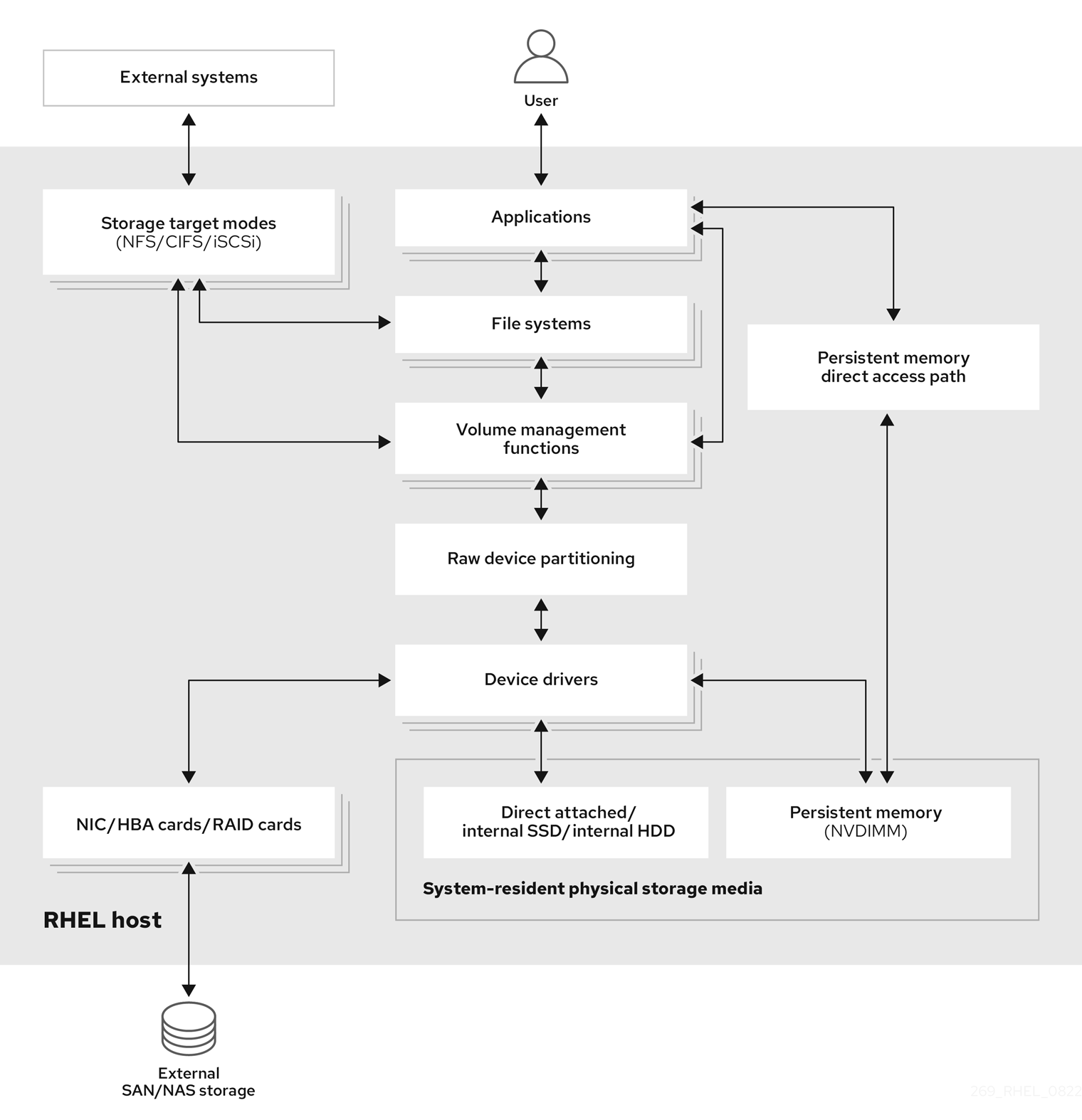 Using parted and fdisk, you can create, modify, delete, and view disk partitions. The following are the partitioning layout standards:

Non-Volatile Dual In-line Memory Modules (NVDIMM) Management
It is a combination of memory and storage. You can enable and manage various types of storage on NVDIMM devices connected to your system.
Block Storage Management
Data is stored in the form of blocks where each block has a unique identifier.
File Storage
Data is stored at file level on the local system. These data can be accessed locally using XFS (default) or ext4, and over a network by using NFS and SMB.

It creates logical devices from physical devices. Logical volume (LV) is a combination of the physical volumes (PV) and volume groups (VG). Configuring LVM include:

It is used for data reduction by using deduplication, compression, and thin provisioning. Using LV below VDO helps in:

An interface which allows host software utility to communicate with solid state drives. Use the following types of fabric transport to configure NVMe over fabrics:

Device Mapper multipathing (DM Multipath)
Allows you to configure multiple I/O paths between server nodes and storage arrays into a single device. These I/O paths are physical SAN connections that can include separate cables, switches, and controllers.

The Red Hat Global File System 2 (GFS2) file system is a 64-bit symmetric cluster file system which provides a shared name space and manages coherency between multiple nodes sharing a common block device. A GFS2 file system is intended to provide a feature set which is as close as possible to a local file system, while at the same time enforcing full cluster coherency between nodes. To achieve this, the nodes employ a cluster-wide locking scheme for file system resources. This locking scheme uses communication protocols such as TCP/IP to exchange locking information.

In a few cases, the Linux file system API does not allow the clustered nature of GFS2 to be totally transparent; for example, programs using POSIX locks in GFS2 should avoid using the GETLK function since, in a clustered environment, the process ID may be for a different node in the cluster. In most cases however, the functionality of a GFS2 file system is identical to that of a local file system.

The gfs2.ko kernel module implements the GFS2 file system and is loaded on GFS2 cluster nodes.

To get the best performance from GFS2, it is important to take into account the performance considerations which stem from the underlying design. Just like a local file system, GFS2 relies on the page cache in order to improve performance by local caching of frequently used data. In order to maintain coherency across the nodes in the cluster, cache control is provided by the glock state machine.

The Red Hat Gluster Storage (RHGS) is a software-defined storage platform that can be deployed in clusters. It aggregates disk storage resources from multiple servers into a single global namespace. GlusterFS is an open source distributed file system that is suitable for cloud and hybrid solutions.

Volumes form the base for GlusterFS and provide different requirements. Each volume is a collection of bricks, which are basic units of storage that are represented by an export directory on a server in the trusted storage pool.

The following types of GlusterFS volumes are available:

Red Hat Ceph Storage (RHCS) is a scalable, open, software-defined storage platform that combines the most stable version of the Ceph storage system with a Ceph management platform, deployment utilities, and support services.

Ceph can run with one monitor; however, to ensure high availability in a production cluster, Red Hat will only support deployments with at least three monitor nodes. Red Hat recommends deploying a total of 5 Ceph Monitors for storage clusters exceeding 750 OSDs.