Chapter 9. Getting started with FS-Cache

FS-Cache is a persistent local cache that file systems can use to take data retrieved from over the network and cache it on local disk. This helps minimize network traffic for users accessing data from a file system mounted over the network (for example, NFS).

The following diagram is a high-level illustration of how FS-Cache works: 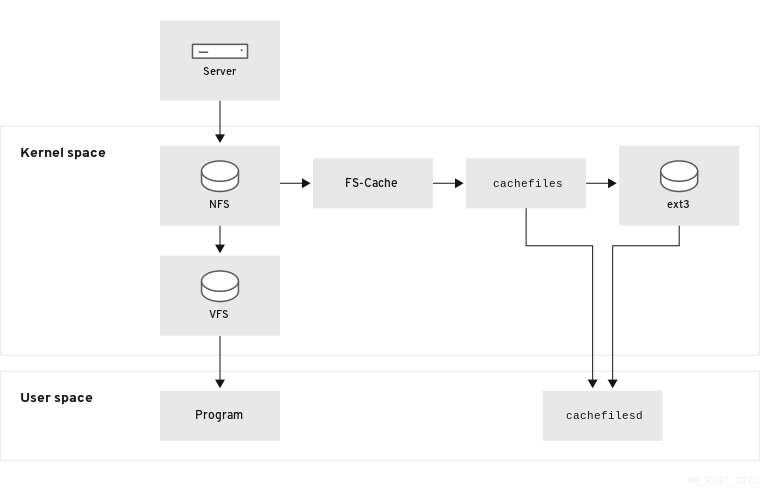 FS-Cache is designed to be as transparent as possible to the users and administrators of a system. Unlike cachefs on Solaris, FS-Cache allows a file system on a server to interact directly with a client’s local cache without creating an overmounted file system. With NFS, a mount option instructs the client to mount the NFS share with FS-cache enabled. The mount point will cause automatic upload for two kernel modules: fscache and cachefiles. The cachefilesd daemon communicates with the kernel modules to implement the cache.

FS-Cache does not alter the basic operation of a file system that works over the network - it merely provides that file system with a persistent place in which it can cache data. For instance, a client can still mount an NFS share whether or not FS-Cache is enabled. In addition, cached NFS can handle files that will not fit into the cache (whether individually or collectively) as files can be partially cached and do not have to be read completely up front. FS-Cache also hides all I/O errors that occur in the cache from the client file system driver.

File systems that support functionalities required by FS-Cache cache back end include the Red Hat Enterprise Linux 8 implementations of the following file systems:

FS-Cache cannot arbitrarily cache any file system, whether through the network or otherwise: the shared file system’s driver must be altered to allow interaction with FS-Cache, data storage/retrieval, and metadata setup and validation. FS-Cache needs indexing keys and coherency data from the cached file system to support persistence: indexing keys to match file system objects to cache objects, and coherency data to determine whether the cache objects are still valid.

In Red Hat Enterprise Linux 8, the cachefilesd package is not installed by default and needs to be installed manually.

FS-Cache does not guarantee increased performance. Using a cache incurs a performance penalty: for example, cached NFS shares add disk accesses to cross-network lookups. While FS-Cache tries to be as asynchronous as possible, there are synchronous paths (e.g. reads) where this isn’t possible.

For example, using FS-Cache to cache an NFS share between two computers over an otherwise unladen GigE network likely will not demonstrate any performance improvements on file access. Rather, NFS requests would be satisfied faster from server memory rather than from local disk.

The use of FS-Cache, therefore, is a compromise between various factors. If FS-Cache is being used to cache NFS traffic, for instance, it may slow the client down a little, but massively reduce the network and server loading by satisfying read requests locally without consuming network bandwidth.

The cache back end works by maintaining a certain amount of free space on the partition hosting the cache. It grows and shrinks the cache in response to other elements of the system using up free space, making it safe to use on the root file system (for example, on a laptop). FS-Cache sets defaults on this behavior, which can be configured via cache cull limits. For more information about configuring cache cull limits, see Cache cull limits configuration.

This procedure shows how to set up a cache.

The cachefilesd daemon works by caching remote data from shared file systems to free space on the disk. This could potentially consume all available free space, which could be bad if the disk also housed the root partition. To control this, cachefilesd tries to maintain a certain amount of free space by discarding old objects (i.e. accessed less recently) from the cache. This behavior is known as cache culling.

The default value of N for each setting is as follows:

When configuring these settings, the following must hold true:

Culling depends on both bxxx and fxxx pairs simultaneously; the user can not treat them separately.

FS-Cache also keeps track of general statistical information. This procedure shows how to get this information.