This section describes the services that can be installed and run on the IdM servers and clients.

Most of the following services are not strictly required to be installed on the IdM server. For example, you can install services such as a certificate authority (CA) or DNS server on an external server outside the IdM domain.

Kerberos
the krb5kdc and kadmin services

IdM uses the Kerberos protocol to support single sign-on. With Kerberos, users only need to present the correct username and password once and can access IdM services without the system prompting for credentials again.

Kerberos is divided into two parts:

You can also install the server without the integrated CA if you create and provide all required certificates independently.

IdM uses DNS for dynamic service discovery. The IdM client installation utility can use information from DNS to automatically configure the client machine. After the client is enrolled in the IdM domain, it uses DNS to locate IdM servers and services within the domain. The BIND (Berkeley Internet Name Domain) implementation of the DNS (Domain Name System) protocols in Red Hat Enterprise Linux includes the named DNS server. named-pkcs11 is a version of the BIND DNS server built with native support for the PKCS#11 cryptographic standard.

For information, see Planning your DNS services and host names.

The Apache HTTP web server provides the IdM Web UI, and also manages communication between the Certificate Authority and other IdM services.

Samba implements the Server Message Block (SMB) protocol, also known as the Common Internet File System (CIFS) protocol, in Red Hat Enterprise Linux. Via the smb service, the SMB protocol enables you to access resources on a server, such as file shares and shared printers. If you have configured a Trust with an Active Directory (AD) environment, the`Winbind` service manages communication between IdM servers and AD servers.

For more information, see Logging in to the Identity Management Web UI using one time passwords.

OpenDNSSEC is a DNS manager that automates the process of keeping track of DNS security extensions (DNSSEC) keys and the signing of zones. The ipa-dnskeysyncd service manages synchronization between the IdM Directory Server and OpenDNSSEC. 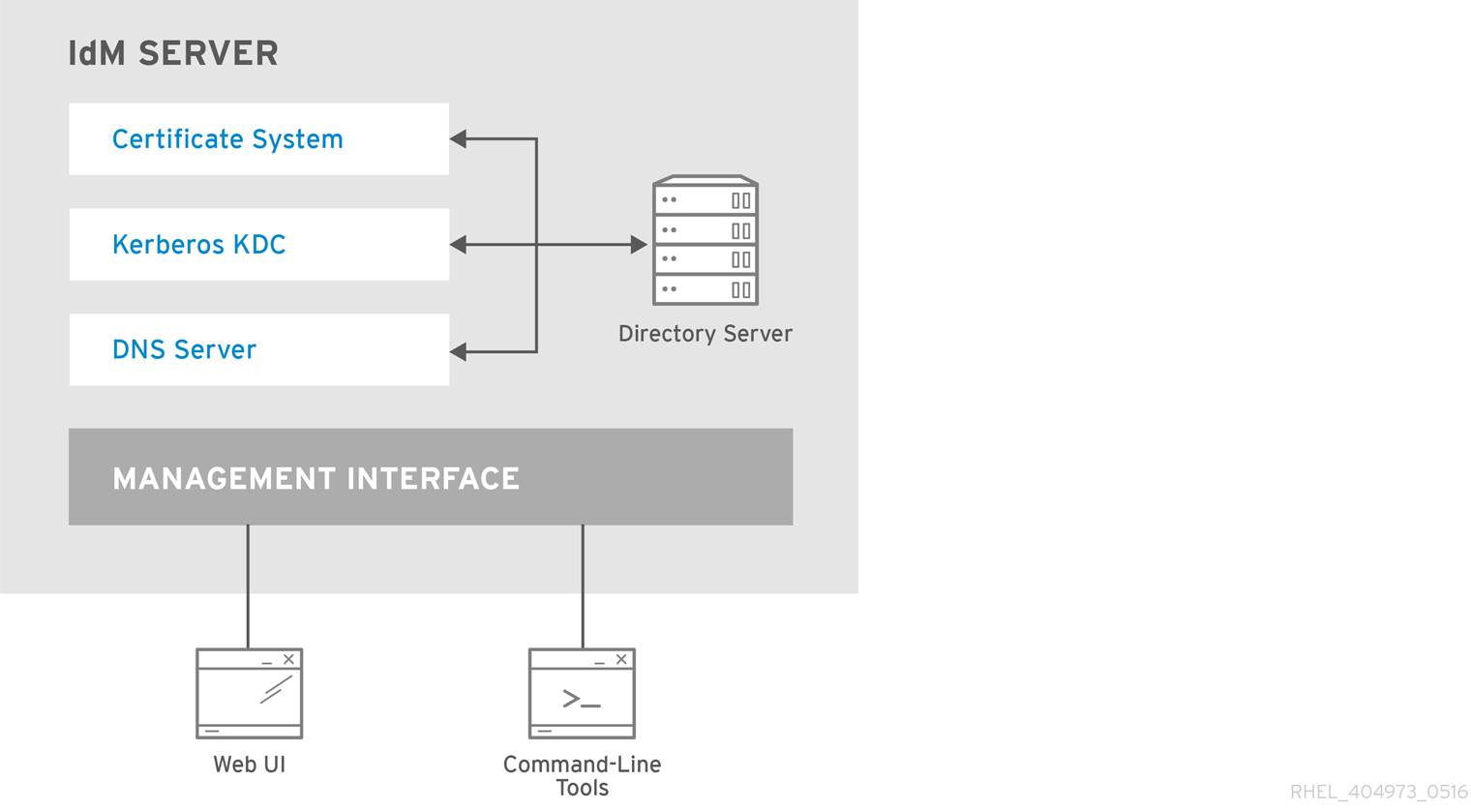 The System Security Services Daemon (SSSD) is the client-side application that manages user authentication and caching credentials. Caching enables the local system to continue normal authentication operations if the IdM server becomes unavailable or if the client goes offline.

For more information, see Understanding SSSD and its benefits.

The certmonger service monitors and renews the certificates on the client. It can request new certificates for the services on the system.

For more information, see Obtaining an IdM certificate for a service using certmonger. 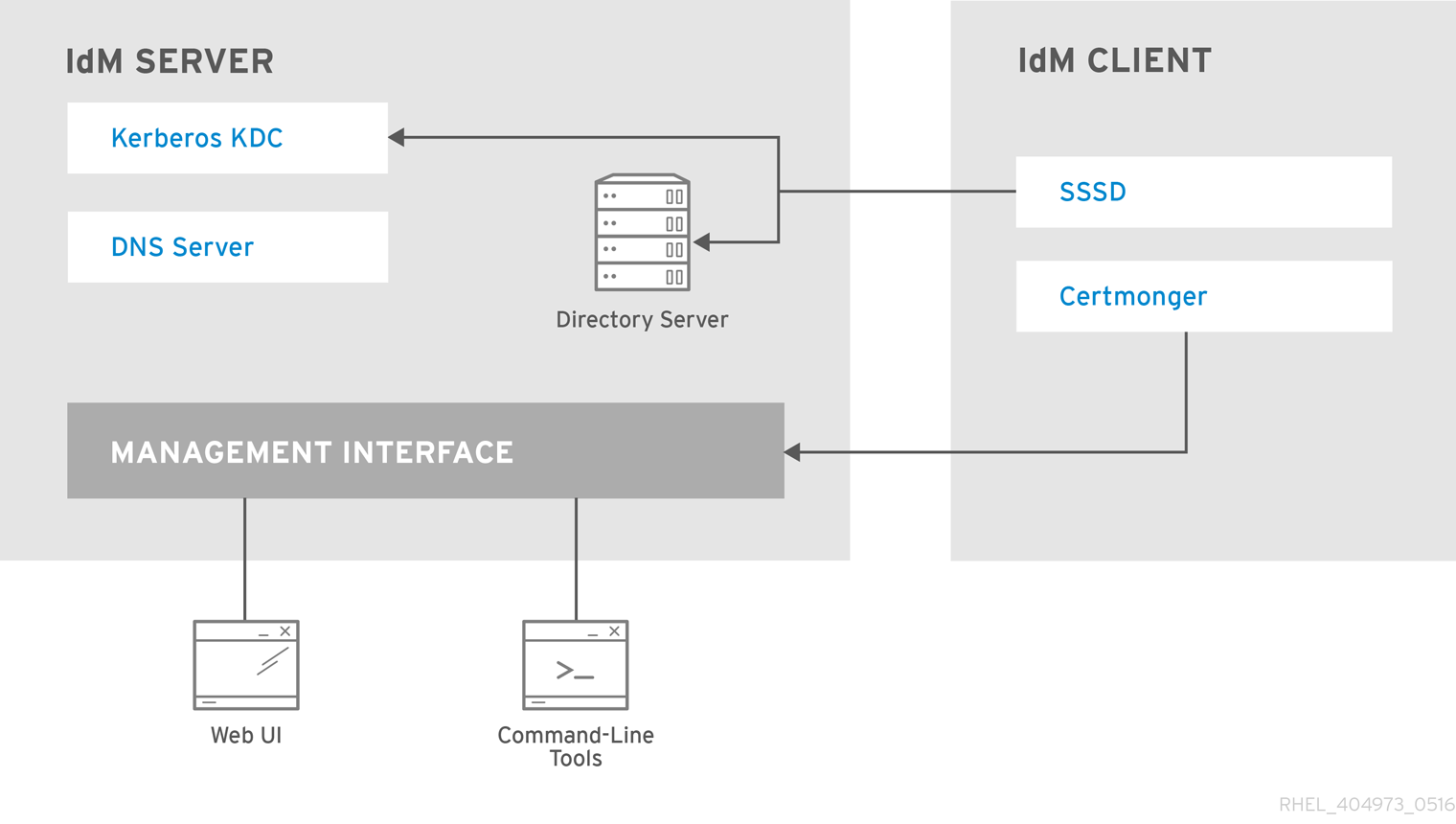 2.2. Viewing the status of IdM services

To view the status of the IdM services that are configured on your IdM server, run the ipactl status command:

The output of the ipactl status command on your server depends on your IdM configuration. For example, if an IdM deployment does not include a DNS server, the named service is not present in the list.

You can start or stop the entire server, or an individual service only.

To start, stop, or restart the entire IdM server, see:

To start, stop, or restart an individual IdM service, see:

To display the version of IdM software, see:

To start the entire IdM server:

To stop the entire IdM server:

To restart the entire IdM server:

To show the status of all the services that make up IdM:

You cannot use the IdM web UI to perform the ipactl commands.

Changing IdM configuration files manually is generally not recommended. However, certain situations require that an administrator performs a manual configuration of specific services. In such situations, use the systemctl utility to stop, start, or restart an individual IdM service.

For example, use systemctl after customizing the Directory Server behavior, without modifying the other IdM services:

To apply the changes you have made in the /etc/sssd/sssd.conf file:

Running systemctl restart sssd.service is required because the System Security Services Daemon (SSSD) does not automatically re-read or re-apply its configuration.

Note that for changes that affect IdM identity ranges, a complete server reboot is recommended.

To start a particular IdM service:

To stop a particular IdM service:

To restart a particular IdM service:

To view the status of a particular IdM service:

You cannot use the IdM web UI to start or stop the individual services running on IdM servers. You can only use the web UI to modify the settings of a Kerberized service by navigating to Identity → Services and selecting the service.

You can display the IdM version number with:

Displaying version through the WebUI

In the IdM WebUI, the software version can be displayed by choosing About from the username menu at the top-right.

From the command line, use the ipa --version command.

If IdM services are not operating properly, you can use the rpm utility to determine the version number of the ipa-server package that is currently installed.