14.4. Reversing Changes in Between Snapshots

To reverse changes made between two existing Snapper snapshots, use the undochange command in the following format, where 1 is the first snapshot and 2 is the second snapshot: 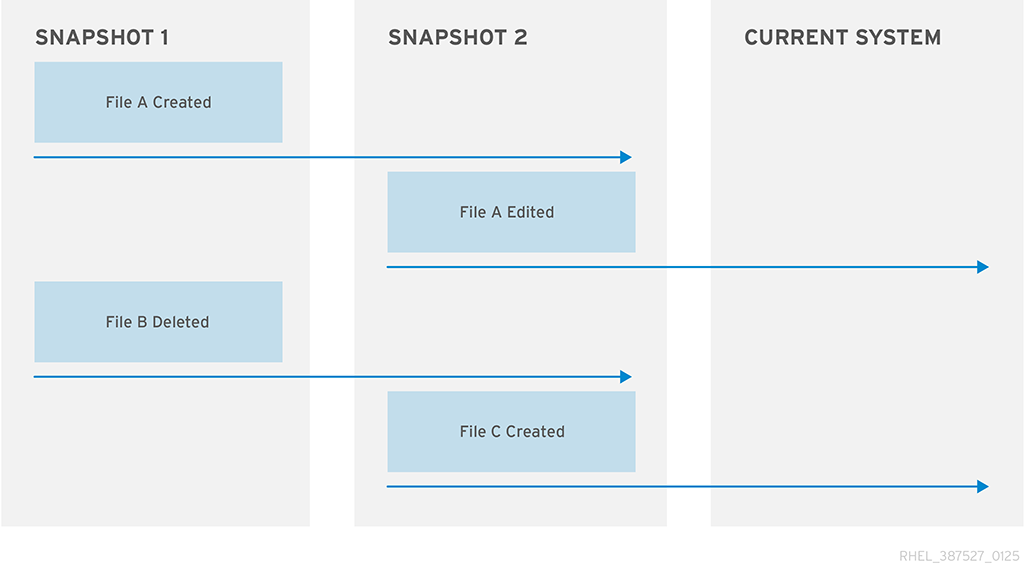 The diagram shows the point in time in which snapshot_1 is created, file_a is created, then file_b deleted. Snapshot_2 is then created, after which file_a is edited and file_c is created. This is now the current state of the system. The current system has an edited version of file_a, no file_b, and a newly created file_c.
When the undochange command is called, Snapper generates a list of modified files between the first listed snapshot and the second. In the diagram, if you use the snapper -c SnapperExample undochange 1..2 command, Snapper creates a list of modified files (that is, file_a is created; file_b is deleted) and applies them to the current system. Therefore: Be aware that if file_b and file_c conflict, the system can become corrupted.
You can also use the snapper -c SnapperExample undochange 2..1 command. In this case, the current system replaces the edited version of file_a with one copied from snapshot_1, which undoes edits of that file made after snapshot_2 was created.

Using the mount and unmount Commands to Reverse Changes