This section describes PCP XFS performance metrics and how to use them. Once started, the Performance Metric Collector Daemon (PMCD) begins collecting performance data from the installed Performance Metric Domain Agents (PMDAs). PMDAs can be individually loaded or unloaded on the system and are controlled by the PMCD on the same host. The XFS PMDA, which is part of the default PCP installation, is used to gather performance metric data of XFS file systems in PCP.
For a list of system services and tools that are distributed with PCP, see Table A.1, “System Services Distributed with Performance Co-Pilot in Red Hat Enterprise Linux 7” and Table A.2, “Tools Distributed with Performance Co-Pilot in Red Hat Enterprise Linux 7”.

The XFS PMDA ships as part of the pcp package and is enabled by default on installation. To install PCP, enter:
To enable and start the PMDA service on the host machine after the pcp and pcp-gui packages are installed, use the following commands:
To query the PCP environment to verify that the PMCD process is running on the host and that the XFS PMDA is listed as enabled in the configuration, enter:

If the XFS PMDA is not listed in PCP configuration readout, install the PMDA agent manually. The PMDA installation script prompts you to specify the PMDA role: collector, monitor, or both. The default option is both collector and monitor, which allows the XFS PMDA to operate correctly in most scenarios.
To install XFS PMDA manually, change to the xfs directory: In the xfs directory, enter:

You can use the -t, -T, and -f options with a group of metrics or an individual metric. Most metric data is provided for each mounted XFS file system on the system at time of probing.
There are different groups of XFS metrics, which are arranged so that each different group is a new leaf node from the root XFS metric, using a dot (.) as a separator. The leaf node semantics (dots) applies to all PCP metrics. For an overview of the types of metrics that are available in each of the groups, see Table A.3, “PCP Metric Groups for XFS”.
Additionally, the XFS documentation contains a section on monitoring XFS file systems: Chapter 13. XFS Monitoring.

With PCP, you can modify the values of certain metrics, especially if the metric acts as a control variable, for example the xfs.control.reset metric. To modify a metric value, use the pmstore tool.

This example shows how to use pmstore with the xfs.control.reset metric to reset the recorded counter values for the XFS PMDA back to zero.

Starting with Red Hat Enterprise Linux 7.3, PCP enables XFS PMDA to allow the reporting of certain XFS metrics per each of the mounted XFS file systems. This makes it easier to pinpoint specific mounted file system issues and evaluate performance. For an overview of the types of metrics available per file system in each of the groups, see Table A.4, “PCP Metric Groups for XFS per Device”.

PCP allows you to log performance metric values that can be replayed later and used for a retrospective performance analysis. Use the pmlogger tool to create archived logs of selected metrics on the system.
With pmlogger, you can specify which metrics are recorded on the system and how often. The default pmlogger configuration file is /var/lib/pcp/config/pmlogger/config.default. The configuration file specifies which metrics are logged by the primary logging instance.
To log metric values on the local machine with pmlogger, start a primary logging instance:
When pmlogger is enabled and a default configuration file is set, a pmlogger line is included in the PCP configuration:

When the pmlogger service is running, PCP logs a default set of metrics on the host. You can use the pmlogconf utility to check the default configuration, and enable XFS logging groups as needed. Important XFS groups to enable include the XFS information, XFS data, and log I/O traffic groups.
Follow pmlogconf prompts to enable or disable groups of related performance metrics, and to control the logging interval for each enabled group. Group selection is made by pressing y (yes) or n (no) in response to the prompt. To create or modify the generic PCP archive logger configuration file with pmlogconf, enter:

You can edit the pmlogger configuration file manually and add specific metrics with given intervals to create a tailored logging configuration.

The following example shows an extract of the pmlogger config.default file with some specific XFS metrics added.

After recording metric data, you can replay the PCP log archives on the system in the following ways:
You can use the pmdumptext tool to view the log files. With pmdumptext, you can parse the selected PCP log archive and export the values into an ASCII table. The pmdumptext tool enables you to dump the entire archive log, or only select metric values from the log by specifying individual metrics on the command line.

For example, to show data on the xfs.perdev.log metric collected in an archive at a 5 second interval and display all headers:
For more information, see the pmdumptext(1) manual page, which is available from the pcp-doc package. 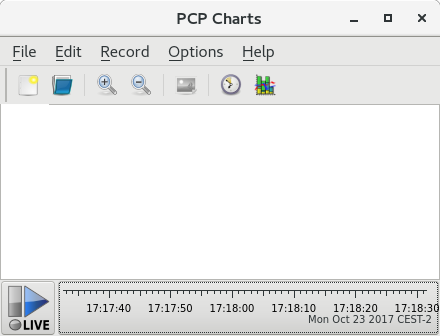 The PCP Charts application
The pmtime server settings are located at the bottom. The start and pause button allows you to control:
Go to File → New Chart to select metric from both the local machine and remote machines by specifying their host name or address. Then, select performance metrics from the remote hosts. Advanced configuration options include the ability to manually set the axis values for the chart, and to manually choose the color of the plots.
There are multiple options to take images or record the views created in PCP Charts:
You can customize the PCP Charts interface to display the data from performance metrics in multiple ways, including:
In PCP Charts, the main configuration file, known as the view, allows the metadata associated with one or more charts to be saved. This metadata describes all chart aspects, including the metrics used and the chart columns. You can create a custom view configuration, save it by clicking File → Save View, and load the view configuration later. For more information about view configuration files and their syntax, see the pmchart(1) manual page.