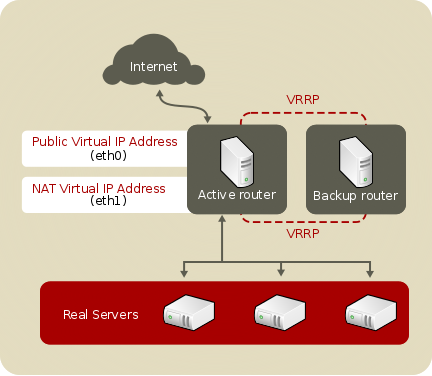 Building a Load Balancer setup that uses direct routing provides increased performance benefits compared to other Load Balancer networking topologies. Direct routing allows the real servers to process and route packets directly to a requesting user rather than passing all outgoing packets through the LVS router. Direct routing reduces the possibility of network performance issues by relegating the job of the LVS router to processing incoming packets only. 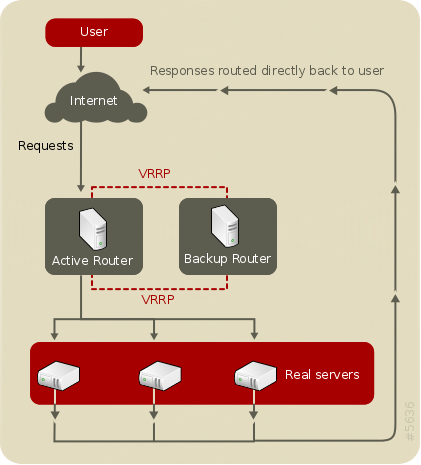 While there are many advantages to using direct routing in Load Balancer, there are limitations as well. The most common issue with Load Balancer through direct routing is with Address Resolution Protocol (ARP).
In typical situations, a client on the Internet sends a request to an IP address. Network routers typically send requests to their destination by relating IP addresses to a machine's MAC address with ARP. ARP requests are broadcast to all connected machines on a network, and the machine with the correct IP/MAC address combination receives the packet. The IP/MAC associations are stored in an ARP cache, which is cleared periodically (usually every 15 minutes) and refilled with IP/MAC associations.
The issue with ARP requests in a direct routing Load Balancer setup is that because a client request to an IP address must be associated with a MAC address for the request to be handled, the virtual IP address of the Load Balancer system must also be associated to a MAC as well. However, since both the LVS router and the real servers all have the same VIP, the ARP request will be broadcast to all the machines associated with the VIP. This can cause several problems, such as the VIP being associated directly to one of the real servers and processing requests directly, bypassing the LVS router completely and defeating the purpose of the Load Balancer setup.
To solve this issue, ensure that the incoming requests are always sent to the LVS router rather than one of the real servers. This can be done by either filtering ARP requests or filtering IP packets. ARP filtering can be done using the arptables utility and IP packets can be filtered using iptables or firewalld. The two approaches differ as follows: