Faults in memory (RAM) modules can cause your system to freeze or crash unpredictably. In certain situations, memory faults might only cause errors with particular combinations of software. For this reason, you should test the memory of a computer before you install Red Hat Enterprise Linux for the first time, even if it has previously run other operating systems.
Red Hat Enterprise Linux includes the Memtest86+ memory testing application. To start memory testing mode, choose Troubleshooting > Memory test at the boot menu. Testing will begin immediately. By default, Memtest86+ carries out ten tests in every pass; a different configuration can be specified by accessing the configuration screen using the c key. After the first pass completes, a message will appear at the bottom informing you of the current status, and another pass will start automatically.

Memtest86+ only works on BIOS systems. Support for UEFI systems is currently unavailable. 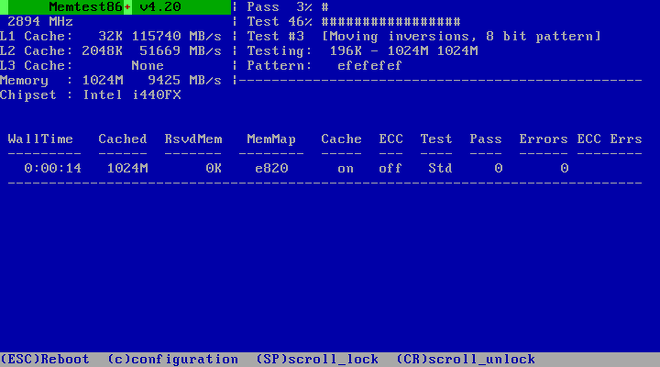 The main screen displayed while testing is in progress is divided into three main areas:
In most cases, a single successful pass (that is, a single run of all 10 tests) is sufficient to verify that your RAM is in good condition. In some rare circumstances, however, errors that went undetected on the first pass might appear on subsequent passes. To perform a thorough test on an important system, leave the tests running overnight or even for a few days in order to complete multiple passes.

The amount of time it takes to complete a single full pass of Memtest86+ varies depending on your system's configuration (notably the RAM size and speed). For example, on a system with 2 GiB of DDR2 memory at 667 MHz, a single pass will take roughly 20 minutes to complete.
To halt the tests and reboot your computer, press the Esc key at any time.
For more information about using Memtest86+, see the official website at http://www.memtest.org/. A README file is also located in /usr/share/doc/memtest86+-version/ on Red Hat Enterprise Linux systems with the memtest86+ package installed.

You can test the integrity of an ISO-based installation source before using it to install Red Hat Enterprise Linux. These sources include DVD, and ISO images stored on a hard drive or NFS server. Verifying that the ISO images are intact before you attempt an installation helps to avoid problems that are often encountered during installation.
To test the checksum integrity of an ISO image, append the rd.live.check to the boot loader command line. Note that this option is used automatically if you select the default installation option from the boot menu (Test this media & install Red Hat Enterprise Linux 7.0).

23.2.3. Booting Your Computer in Rescue Mode

You can boot a command-line Linux system from an installation disc without actually installing Red Hat Enterprise Linux on the computer. This enables you to use the utilities and functions of a running Linux system to modify or repair already installed operating systems.
To load the rescue system with the installation disk or USB drive, choose Rescue a Red Hat Enterprise Linux system from the Troubleshooting submenu in the boot menu, or use the inst.rescue boot option.
Specify the language, keyboard layout and network settings for the rescue system with the screens that follow. The final setup screen configures access to the existing system on your computer.
By default, rescue mode attaches an existing operating system to the rescue system under the directory /mnt/sysimage/.
For additional information about rescue mode and other maintenance modes, see Chapter 32, Basic System Recovery.