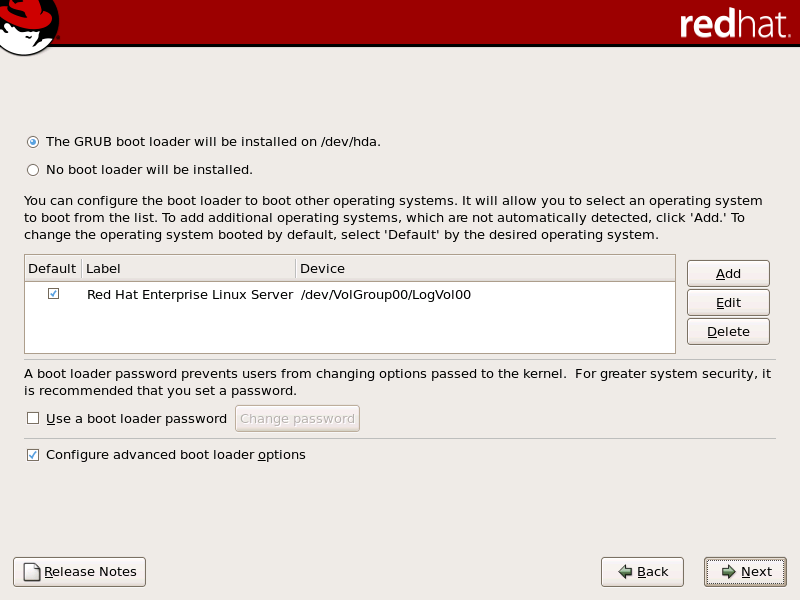 If you choose not to install GRUB for any reason, you will not be able to boot the system directly, and you must use another boot method (such as a commercial boot loader application). Use this option only if you are sure you have another way of booting the system!
Every bootable partition is listed, including partitions used by other operating systems. The partition holding the system's root file system has a Label of Red Hat Enterprise Linux (for GRUB). Other partitions may also have boot labels. To add or change the boot label for other partitions that have been detected by the installation program, click once on the partition to select it. Once selected, you can change the boot label by clicking the Edit button.
Select Default beside the preferred boot partition to choose your default bootable OS. You cannot move forward in the installation unless you choose a default boot image.

When selecting a GRUB password, be aware that GRUB recognizes only the QWERTY keyboard layout, regardless of the keyboard actually attached to the system. If you use a keyboard with a significantly different layout, it might be more effective to memorize a pattern of keystrokes rather than the word that the pattern produces.
To configure more advanced boot loader options, such as changing the drive order or passing options to the kernel, be sure Configure advanced boot loader options is selected before clicking Next.

If you are installing Red Hat Enterprise Linux on a network device accessible through multiple paths, ensure that you select Configure advanced boot loader options before you click Next. 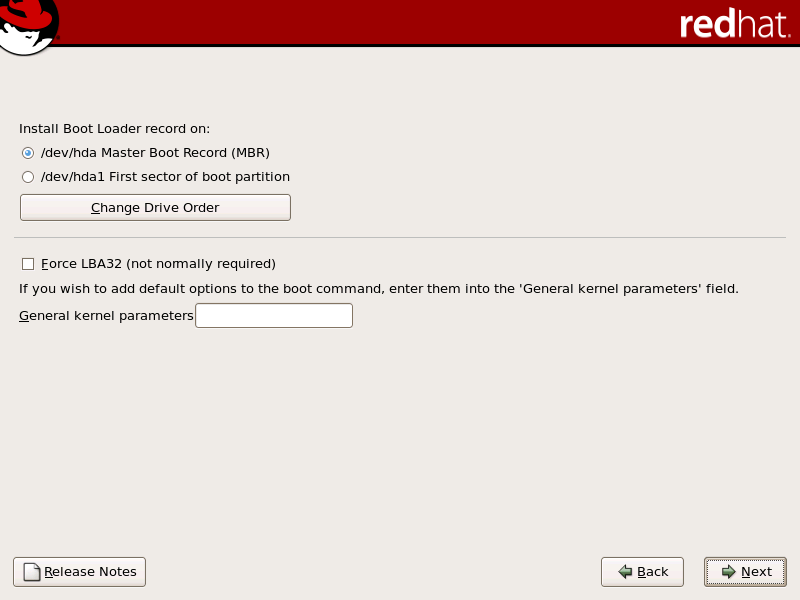 If you have a RAID card, be aware that some BIOSes do not support booting from the RAID card. In cases such as these, the boot loader should not be installed on the MBR of the RAID array. Rather, the boot loader should be installed on the MBR of the same drive as the /boot/ partition was created.
If your system only uses Red Hat Enterprise Linux, you should choose the MBR.
Click the Change Drive Order button if you would like to rearrange the drive order or if your BIOS does not return the correct drive order. Changing the drive order may be useful if you have multiple SCSI adapters, or both SCSI and IDE adapters, and you want to boot from the SCSI device.
The Force LBA32 (not normally required) option allows you to exceed the 1024 cylinder limit for the /boot/ partition. If you have a system which supports the LBA32 extension for booting operating systems above the 1024 cylinder limit, and you want to place your /boot/ partition above cylinder 1024, you should select this option.

While partitioning your hard drive, keep in mind that the BIOS in some older systems cannot access more than the first 1024 cylinders on a hard drive. If this is the case, leave enough room for the /boot Linux partition on the first 1024 cylinders of your hard drive to boot Linux. The other Linux partitions can be after cylinder 1024.
In parted, 1024 cylinders equals 528MB. For more information, refer to:
To add default options to the boot command, enter them into the Kernel parameters field. Any options you enter are passed to the Linux kernel every time it boots.

If you are installing Red Hat Enterprise Linux on a network device accessible through multiple paths, ensure that GRUB is installed on the MBR of /dev/mapper/mpath0.

If you do not wish to use a boot loader, you have several alternatives:

LOADLIN
You can load Linux from MS-DOS. Unfortunately, this requires a copy of the Linux kernel (and an initial RAM disk, if you have a SCSI adapter) to be available on an MS-DOS partition. The only way to accomplish this is to boot your Red Hat Enterprise Linux system using some other method (for example, from a boot CD-ROM) and then copy the kernel to an MS-DOS partition. LOADLIN is available from
ftp://metalab.unc.edu/pub/Linux/system/boot/dualboot/
and associated mirror sites.
SYSLINUX
SYSLINUX is an MS-DOS program very similar to LOADLIN. It is also available from
ftp://metalab.unc.edu/pub/Linux/system/boot/loaders/
and associated mirror sites.
Commercial boot loaders
You can load Linux using commercial boot loaders. For example, System Commander and Partition Magic are able to boot Linux (but still require GRUB to be installed in your Linux root partition).

Boot loaders such as LOADLIN and System Commander are considered to be third-party boot loaders and are not supported by Red Hat.

In previous versions of Red Hat Enterprise Linux there were two different kernel versions, a uniprocessor version and an SMP version. In Red Hat Enterprise Linux 5.11 the kernel is SMP-enabled by default and will take advantage of multiple core, hyperthreading, and multiple CPU capabilities when they are present. This same kernel can run on single CPUs with a single core and no hyperthreading.