The default configuration file (/etc/samba/smb.conf) allows users to view their home directories as a Samba share. It also shares all printers configured for the system as Samba shared printers. In other words, you can attach a printer to the system and print to it from the Windows machines on your network.

The Samba Server Configuration Tool does not display shared printers or the default stanza that allows users to view their own home directories on the Samba server.

The first step in configuring a Samba server is to configure the basic settings for the server and a few security options. After starting the application, select Preferences > Server Settings from the pulldown menu. The Basic tab is displayed as shown in Figure 22.4, “Configuring Basic Server Settings”. 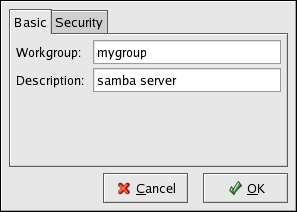 On the Basic tab, specify which workgroup the computer should be in as well as a brief description of the computer. They correspond to the workgroup and server string options in smb.conf. 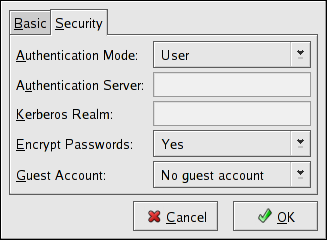 The Security tab contains the following options:
After clicking OK, the changes are written to the configuration file and the daemon is restarted; thus, the changes take effect immediately. 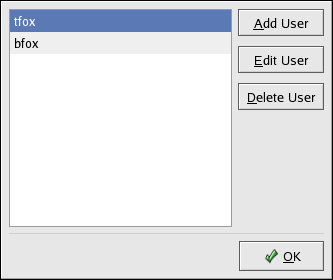 To add a Samba user, select Preferences > Samba Users from the pulldown menu, and click the Add User button. In the Create New Samba User window select a Unix Username from the list of existing users on the local system.
If the user has a different username on a Windows machine and needs to log into the Samba server from the Windows machine, specify that Windows username in the Windows Username field. The Authentication Mode on the Security tab of the Server Settings preferences must be set to User for this option to work.
Also, configure a Samba Password for the Samba User and confirm it by typing it again. Even if you opt to use encrypted passwords for Samba, it is recommended that the Samba passwords for all users are different from their system passwords.
To edit an existing user, select the user from the list, and click Edit User. To delete an existing Samba user, select the user, and click the Delete User button. Deleting a Samba user does not delete the associated system user account.
The users are modified immediately after clicking the OK button. 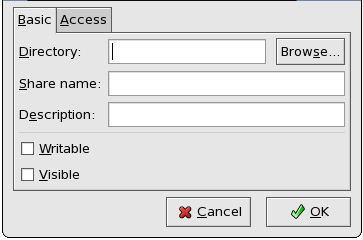