Security-Enhanced Linux (SELinux) is a security architecture integrated into the 2.6.x kernel using the Linux Security Modules (LSM). It is a project of the United States National Security Agency (NSA) and the SELinux community. SELinux integration into Red Hat Enterprise Linux was a joint effort between the NSA and Red Hat.

SELinux provides a flexible Mandatory Access Control (MAC) system built into the Linux kernel. Under standard Linux Discretionary Access Control (DAC), an application or process running as a user (UID or SUID) has the user's permissions to objects such as files, sockets, and other processes. Running a MAC kernel protects the system from malicious or flawed applications that can damage or destroy the system.
SELinux defines the access and transition rights of every user, application, process, and file on the system. SELinux then governs the interactions of these entities using a security policy that specifies how strict or lenient a given Red Hat Enterprise Linux installation should be.
On a day-to-day basis, system users will be largely unaware of SELinux. Only system administrators need to consider how strict a policy to implement for their server environment. The policy can be as strict or as lenient as needed, and is very finely detailed. This detail gives the SELinux kernel complete, granular control over the entire system.
The SELinux Decision Making Process

When a subject, (for example, an application), attempts to access an object (for example, a file), the policy enforcement server in the kernel checks an access vector cache (AVC), where subject and object permissions are cached. If a decision cannot be made based on data in the AVC, the request continues to the security server, which looks up the security context of the application and the file in a matrix. Permission is then granted or denied, with an avc: denied message detailed in /var/log/messages if permission is denied. The security context of subjects and objects is applied from the installed policy, which also provides the information to populate the security server's matrix.

Refer to the following diagram: 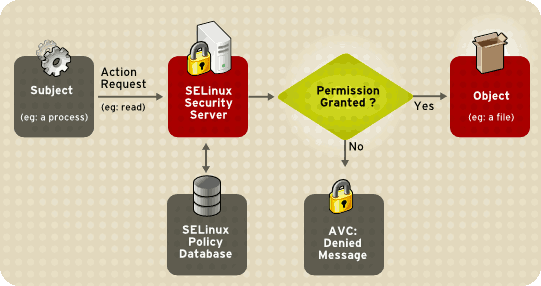 Instead of running in enforcing mode, SELinux can run in permissive mode, where the AVC is checked and denials are logged, but SELinux does not enforce the policy. This can be useful for troubleshooting and for developing or fine-tuning SELinux policy.

For more information about how SELinux works, refer to Section 49.2.3, “Additional Resources”.