The maximum number of nodes supported in a Red Hat Cluster is 16.

Cluster management manages cluster quorum and cluster membership. CMAN (an abbreviation for cluster manager) performs cluster management in Red Hat Cluster Suite for Red Hat Enterprise Linux 5. CMAN is a distributed cluster manager and runs in each cluster node; cluster management is distributed across all nodes in the cluster (refer to Figure 1.2, “CMAN/DLM Overview”).
CMAN keeps track of cluster quorum by monitoring the count of cluster nodes. If more than half the nodes are active, the cluster has quorum. If half the nodes (or fewer) are active, the cluster does not have quorum, and all cluster activity is stopped. Cluster quorum prevents the occurrence of a "split-brain" condition — a condition where two instances of the same cluster are running. A split-brain condition would allow each cluster instance to access cluster resources without knowledge of the other cluster instance, resulting in corrupted cluster integrity.
Quorum is determined by communication of messages among cluster nodes via Ethernet. Optionally, quorum can be determined by a combination of communicating messages via Ethernet and through a quorum disk. For quorum via Ethernet, quorum consists of 50 percent of the node votes plus 1. For quorum via quorum disk, quorum consists of user-specified conditions.

By default, each node has one quorum vote. Optionally, you can configure each node to have more than one vote.
CMAN keeps track of membership by monitoring messages from other cluster nodes. When cluster membership changes, the cluster manager notifies the other infrastructure components, which then take appropriate action. For example, if node A joins a cluster and mounts a GFS file system that nodes B and C have already mounted, then an additional journal and lock management is required for node A to use that GFS file system. If a cluster node does not transmit a message within a prescribed amount of time, the cluster manager removes the node from the cluster and communicates to other cluster infrastructure components that the node is not a member. Again, other cluster infrastructure components determine what actions to take upon notification that node is no longer a cluster member. For example, Fencing would fence the node that is no longer a member. 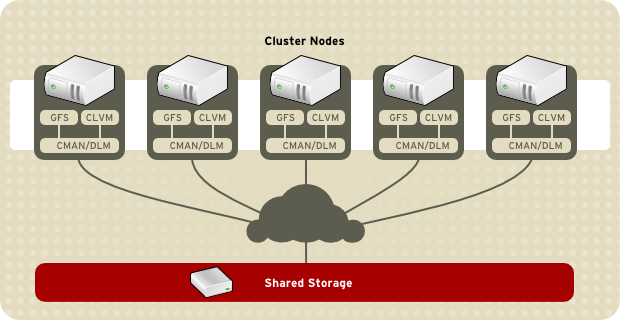 Fencing is the disconnection of a node from the cluster's shared storage. Fencing cuts off I/O from shared storage, thus ensuring data integrity. The cluster infrastructure performs fencing through the fence daemon, fenced.
When CMAN determines that a node has failed, it communicates to other cluster-infrastructure components that the node has failed. fenced, when notified of the failure, fences the failed node. Other cluster-infrastructure components determine what actions to take — that is, they perform any recovery that needs to done. For example, DLM and GFS, when notified of a node failure, suspend activity until they detect that fenced has completed fencing the failed node. Upon confirmation that the failed node is fenced, DLM and GFS perform recovery. DLM releases locks of the failed node; GFS recovers the journal of the failed node.
The fencing program determines from the cluster configuration file which fencing method to use. Two key elements in the cluster configuration file define a fencing method: fencing agent and fencing device. The fencing program makes a call to a fencing agent specified in the cluster configuration file. The fencing agent, in turn, fences the node via a fencing device. When fencing is complete, the fencing program notifies the cluster manager.
Red Hat Cluster Suite provides a variety of fencing methods:
Figure 1.3, “Power Fencing Example” shows an example of power fencing. In the example, the fencing program in node A causes the power controller to power off node D. Figure 1.4, “Fibre Channel Switch Fencing Example” shows an example of Fibre Channel switch fencing. In the example, the fencing program in node A causes the Fibre Channel switch to disable the port for node D, disconnecting node D from storage. 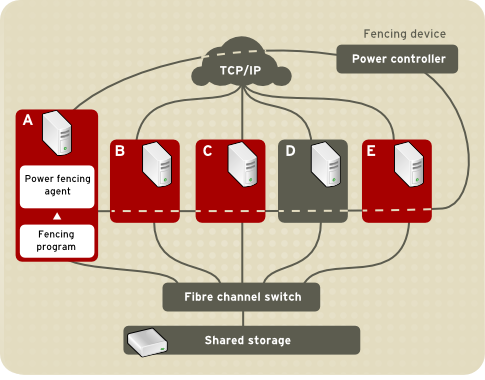 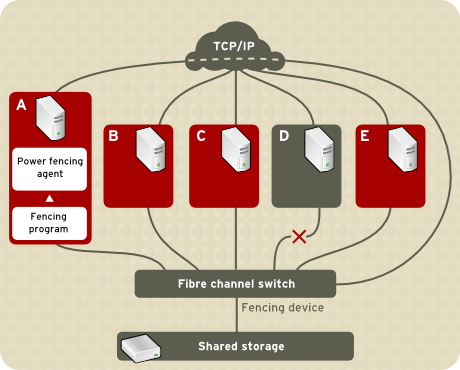 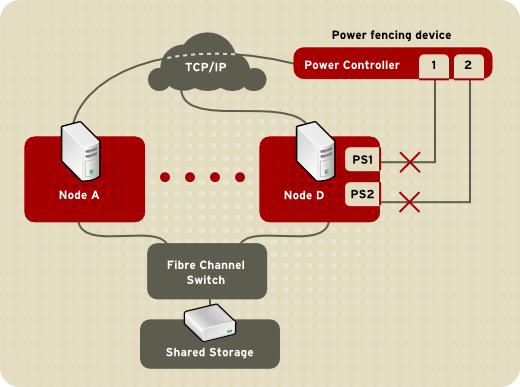 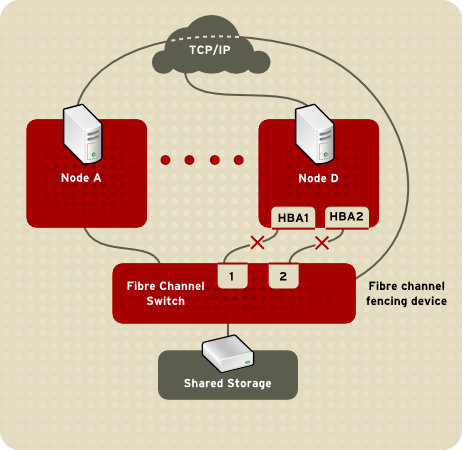 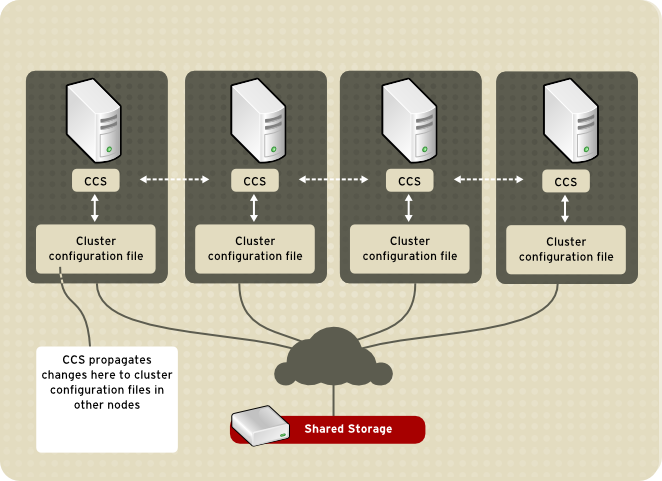 Other cluster components (for example, CMAN) access configuration information from the configuration file through CCS (refer to Figure 1.7, “CCS Overview”). 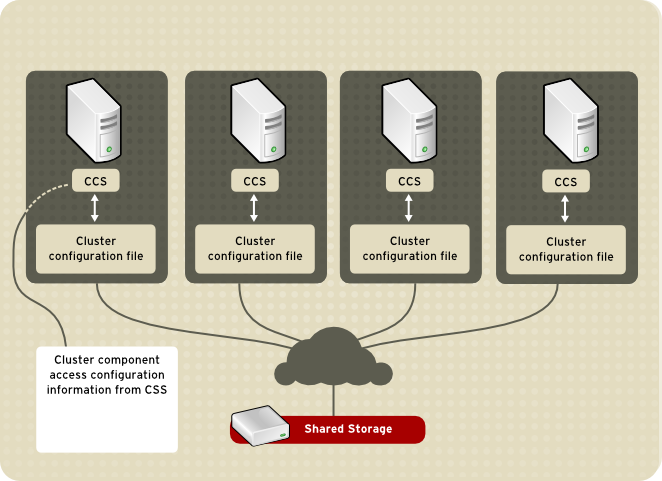 The cluster configuration file (/etc/cluster/cluster.conf) is an XML file that describes the following cluster characteristics: