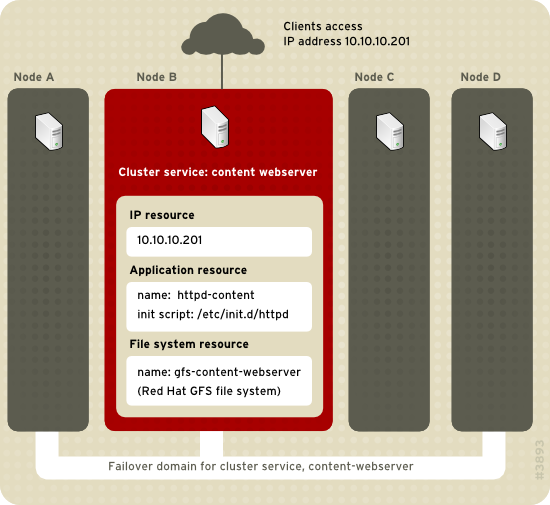 Clients access the HA service through the IP address 10.10.10.201, enabling interaction with the web server application, httpd-content. The httpd-content application uses the gfs-content-webserver file system. If node B were to fail, the content-webserver HA service would fail over to node D. If node D were not available or also failed, the service would fail over to node A. Failover would occur with minimal service interruption to the cluster clients. For example, in an HTTP service, certain state information may be lost (like session data). The HA service would be accessible from another cluster node via the same IP address as it was before failover.

For more information about HA services and failover domains, refer to Red Hat Cluster Suite Overview. For information about configuring failover domains, refer to Section 3.7, “Configuring a Failover Domain” (using Conga) or Section 5.6, “Configuring a Failover Domain” (using system-config-cluster).
An HA service is a group of cluster resources configured into a coherent entity that provides specialized services to clients. An HA service is represented as a resource tree in the cluster configuration file, /etc/cluster/cluster.conf (in each cluster node). In the cluster configuration file, each resource tree is an XML representation that specifies each resource, its attributes, and its relationship among other resources in the resource tree (parent, child, and sibling relationships).

Because an HA service consists of resources organized into a hierarchical tree, a service is sometimes referred to as a resource tree or resource group. Both phrases are synonymous with HA service.
At the root of each resource tree is a special type of resource — a service resource. Other types of resources comprise the rest of a service, determining its characteristics. Configuring an HA service consists of creating a service resource, creating subordinate cluster resources, and organizing them into a coherent entity that conforms to hierarchical restrictions of the service.
Red Hat Cluster supports the following HA services:
There are two major considerations to take into account when configuring an HA service:
The types of resources and the hierarchy of resources depend on the type of service you are configuring.
The types of cluster resources are listed in Appendix C, HA Resource Parameters. Information about parent, child, and sibling relationships among resources is described in Appendix D, HA Resource Behavior.