LVM can be configured during the graphical installation process, the text-based installation process, or during a kickstart installation. You can use the utilities from the lvm package to create your own LVM configuration post-installation, but these instructions focus on using Disk Druid during installation to complete this task.
Read Chapter 7, Logical Volume Manager (LVM) first to learn about LVM. An overview of the steps required to configure LVM include:

Although the following steps are illustrated during a GUI installation, the same can be done during a text-based installation.
Two 9.1 GB SCSI drives (/dev/sda and /dev/sdb) are used in the following examples. They detail how to create a simple configuration using a single LVM volume group with associated logical volumes during installation.

On the Disk Partitioning Setup screen, select Automatically partition.
For Red Hat Enterprise Linux, LVM is the default method for disk partitioning. If you do not wish to have LVM implemented, or if you require RAID partitioning, manual disk partitioning through Disk Druid is required.
The following properties make up the automatically created configuration: 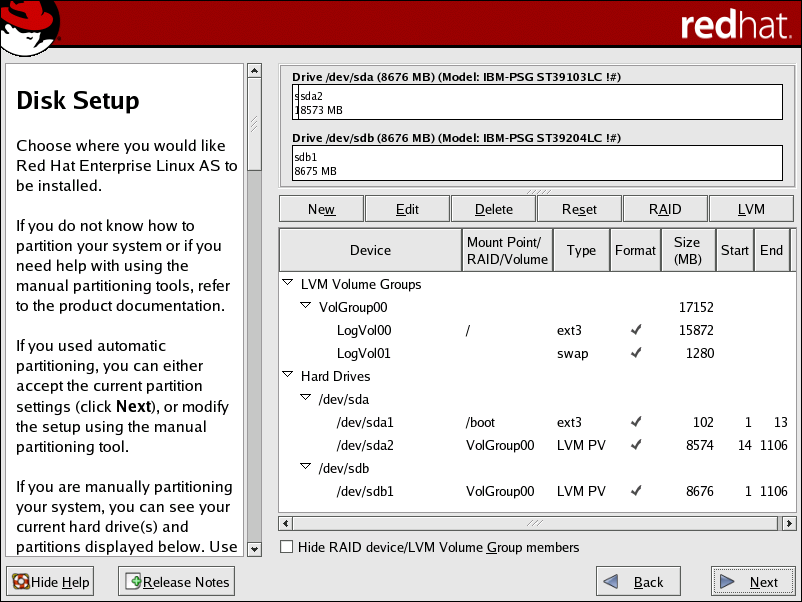 If enabling quotas are of interest to you, it may be best to modify the automatic configuration to include other mount points, such as /home/ or /var/, so that each file system has its own independent quota configuration limits.
In most cases, the default automatic LVM partitioning is sufficient, but advanced implementations could warrant modification or manual configuration of the LVM partition tables.

If you anticipate future memory upgrades, leaving some free space in the volume group would allow for easy future expansion of the swap space logical volume on the system; in which case, the automatic LVM configuration should be modified to leave available space for future growth.