The underlying physical storage unit of an LVM logical volume is a block device such as a partition or whole disk. To use the device for an LVM logical volume the device must be initialized as a physical volume (PV). Initializing a block device as a physical volume places a label near the start of the device.
By default, the LVM label is placed in the second 512-byte sector. You can overwrite this default by placing the label on any of the first 4 sectors. This allows LVM volumes to co-exist with other users of these sectors, if necessary.
An LVM label provides correct identification and device ordering for a physical device, since devices can come up in any order when the system is booted. An LVM label remains persistent across reboots and throughout a cluster.
The LVM label identifies the device as an LVM physical volume. It contains a random unique identifier (the UUID) for the physical volume. It also stores the size of the block device in bytes, and it records where the LVM metadata will be stored on the device.
The LVM metadata contains the configuration details of the LVM volume groups on your system. By default, an identical copy of the metadata is maintained in every metadata area in every physical volume within the volume group. LVM metadata is small and stored as ASCII.
Currently LVM allows you to store 0, 1 or 2 identical copies of its metadata on each physical volume. The default is 1 copy. Once you configure the number of metadata copies on the physical volume, you cannot change that number at a later time. The first copy is stored at the start of the device, shortly after the label. If there is a second copy, it is placed at the end of the device. If you accidentally overwrite the area at the beginning of your disk by writing to a different disk than you intend, a second copy of the metadata at the end of the device will allow you to recover the metadata.
For detailed information about the LVM metadata and changing the metadata parameters, see Appendix D, LVM Volume Group Metadata.

Figure 2.1, “Physical Volume layout” shows the layout of an LVM physical volume. The LVM label is on the second sector, followed by the metadata area, followed by the usable space on the device. 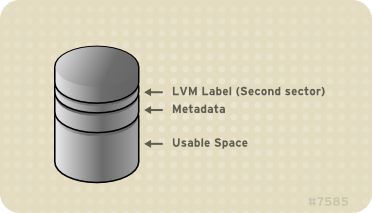 LVM allows you to create physical volumes out of disk partitions. It is generally recommended that you create a single partition that covers the whole disk to label as an LVM physical volume for the following reasons:
Although it it is not recommended, there may be specific circumstances when you will need to divide a disk into separate LVM physical volumes. For example, on a system with few disks it may be necessary to move data around partitions when you are migrating an existing system to LVM volumes. Additionally, if you have a very large disk and want to have more than one volume group for administrative purposes then it is necessary to partition the disk. If you do have a disk with more than one partition and both of those partitions are in the same volume group, take care to specify which partitions are to be included in a logical volume when creating striped volumes.