Distributing the data allows the directory service to be scaled across multiple servers without physically containing those directory entries on each server in the enterprise. A distributed directory can therefore hold a much larger number of entries than would be possible with a single server.
In addition, the directory service can be configured to hide the distribution details from the user. As far as users and applications are concerned, there is only a single directory that answers their directory queries.
The following sections describe the mechanics of data distribution in more detail:

Directory Server stores data in LDBM databases. This a high-performance, disk-based database. Each database consists of a set of large files that contain all of the data assigned to it.
Different portions of the directory tree can be stored in different databases.

When the directory tree is divided between a number of databases, these databases can then be distributed across multiple servers. For example, if there are three databases, DB1, DB2, and DB3, to contain the three suffixes of the directory tree, they can be stored on two servers, Server A and Server B.

Each database contains the data within a specific suffix of the Directory Server. Both root and subsuffixes can be created to organize the contents of the directory tree. A root suffix is the entry at the top of a tree. It can be the root of the directory tree or part of a larger tree designed for the Directory Server. A subsuffix is a branch beneath a root suffix. The data for root and subsuffixes are contained by databases.
For example, Example Corp. creates suffixes to represent the distribution of their directory data.

Example Corp. can spread their directory tree across five different databases, as in Figure 6.4, “Directory Tree Spread across Multiple Databases”.

The resulting suffixes would contain the following entries: 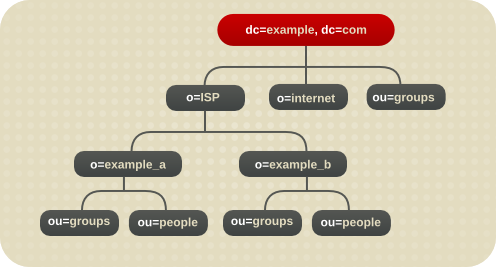 The dc=example,dc=com entry represents a root suffix. The entry for each hosted ISP is also a root suffix (o=example_a and o=example_b). The ou=people and the ou=groups branches are subsuffixes under each root suffix.