Decide how the updates flow from server to server and how the servers interact when propagating updates. There are the four basic scenarios and a few strategies for deciding the method appropriate for the environment. These basic scenarios can be combined to build the replication topology that best suits the network environment. 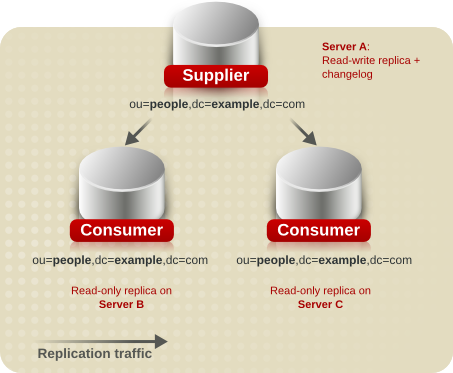 Red Hat Directory Server supports a maximum of 20 supplier servers in any replication environment, as well as an unlimited number of hub suppliers. The number of consumer servers that hold the read-only replicas is unlimited.
When the same data is modified on multiple servers, there is a conflict resolution procedure to determine which change is kept. The Directory Server considers the valid change to be the most recent one.
Multiple servers can have main copies of the same data, but, within the scope of a single replication agreement, there is only one supplier server and one consumer. Consequently, to create a multi-supplier environment between two supplier servers that share responsibility for the same data, create more than one replication agreement.

In Figure 7.2, “Simplified Multi-Supplier Replication Configuration”, supplier A and supplier B each hold a read-write replica of the same data.
Figure 7.3, “Replication Traffic in a Simple Multi-Supplier Environment” illustrates the replication traffic with two suppliers (read-write replicas in the illustration), and two consumers (read-only replicas in the illustration). The consumers can be updated by both suppliers. The supplier servers ensure that the changes do not collide. 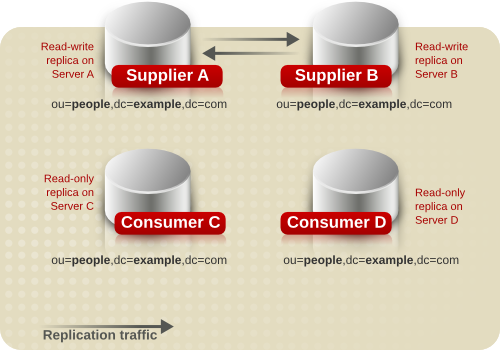 Replication in Directory Server can support as many as 20 suppliers, which all share responsibility for the same data. Using that many suppliers requires creating a range of replication agreements. (Also remember that in multi-supplier replication, each of the suppliers can be configured in different topologies — meaning there can be 20 different directory trees and even schema differences. There are many variables that have a direct impact on the topology selection.)
In multi-supplier replication, the suppliers can send updates to all other suppliers or to some subset of other suppliers. Sending updates to all other suppliers means that changes are propogated faster and the overall scenario has much better failure-tolerance. However, it also increases the complexity of configuring suppliers and introduces high network demand and high server demand. Sending updates to a subset of suppliers is much simpler to configure and reduces the network and server loads, but there is a risk that data could be lost if there were multiple server failures.
Figure 7.4, “Multi-Supplier Replication Configuration A” illustrates a fully connected mesh topology where four supplier servers feed data to the other three supplier servers (which also function as consumers). A total of twelve replication agreements exist between the four supplier servers. 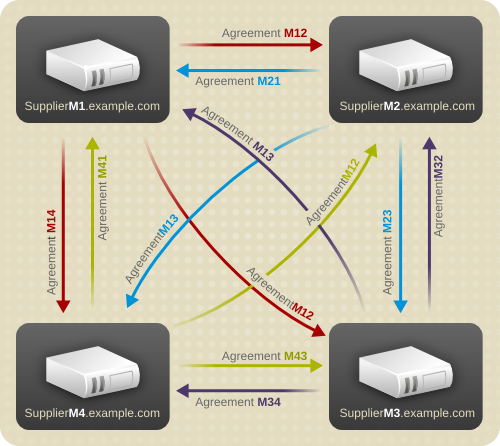 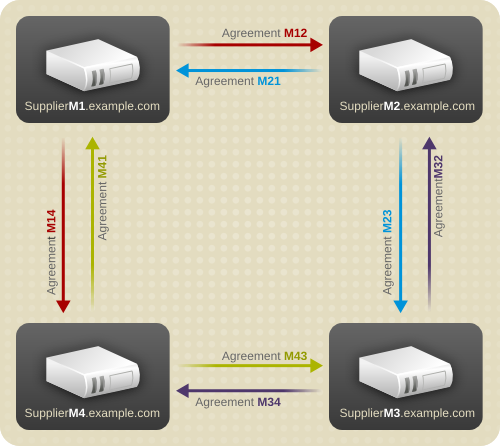 In a cascading replication scenario, a hub supplier receives updates from a supplier server and replays those updates on consumer servers. The hub supplier is a hybrid; it holds a read-only replica, like a typical consumer server, and it also maintains a changelog like a typical supplier server.
Hub suppliers forward supplier data as they receive it from the original suppliers. Similarly, when a hub supplier receives an update request from a directory client, it refers the client to the supplier server.
Cascading replication is useful if some of the network connections between various locations in the organization are better than others. For example, Example Corp. keeps the main copy of its directory data in Minneapolis, and the consumer servers in New York and Chicago. The network connection between Minneapolis and New York is very good, but the connection between Minneapolis and Chicago is poor. Since the network between New York and Chicago is fair, Example administrators use cascading replication to move directory data from Minneapolis to New York to Chicago. 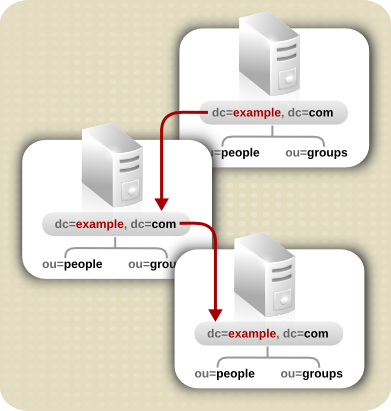 Figure 7.7, “Replication Traffic and Changelogs in Cascading Replication” illustrates the same scenario from a different perspective, which shows how the replicas are configured on each server (read-write or read-only), and which servers maintain a changelog. 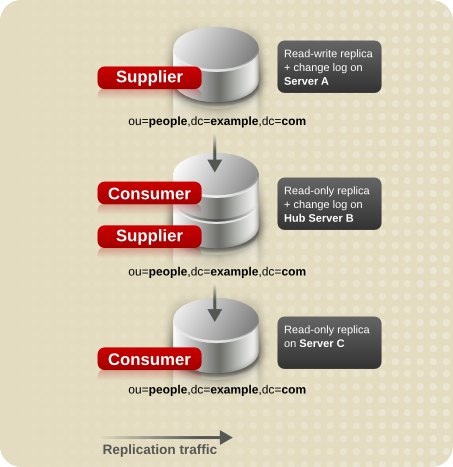 Any of the replication scenarios can be combined to suit the needs of the network and directory environment. One common combination is to use a multi-supplier configuration with a cascading configuration. 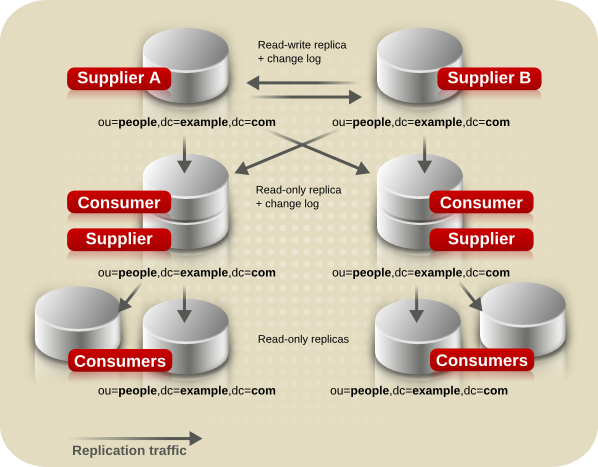