During normal operations, all the updates made to entries in the Directory Server that need to be sent to Active Directory are collected to the changelog and then replayed during an incremental update.
To manually synchronize the changes:

Two aspects of the connection for the sync agreement can be altered:
For example:

It is not possible to change the port number of the Active Directory sync peer. Therefore, it is also not possible to switch between standard/STARTTLS connections and TLS connections, since that requires changing between standard and insecure ports.
To change to or from TLS, delete the sync agreement and add it again with the updated port number and new transport information.

16.11.5. Handling Entries That Move Out of the Synchronized Subtree 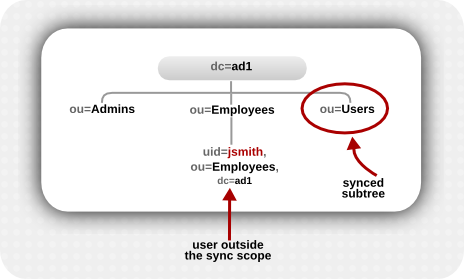 This assumption is not necessarily an accurate one, particularly for user entries which always existed outside the synchronized subtree.
The winSyncMoveAction attribute for the synchronization agreement sets instructions on how to handle these moved entries:
If it is necessary to change the default: