Cross site (x-site) replication allows backing up the data from one cluster to other clusters, potentially situated in different geographical location. The cross-site replication is built on top of JGroups' RELAY2 protocol . This document describes the technical design of cross site replication in more detail.

The diagram below depicts a possible setup of replicated sites, followed by a description of individual elements present in the deployment. Options are then explained at large in future paragraphs. Comments on the diagram above: 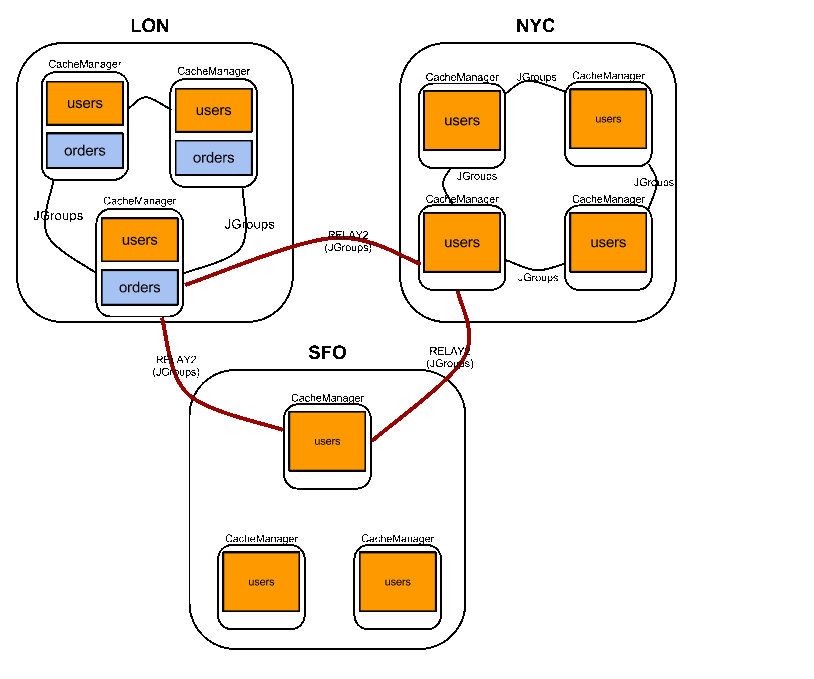 The cross-site replication configuration spreads over the following files:

The names of the site (case sensitive) should match the name of a site as defined within JGroups' RELAY2 protocol configuration file. Besides the global configuration, each cache specifies its backup policy in the "site" element:

The "users" cache backups its data to the "NYC" and "SFO" sites. Even though the "LON" appears as a backup site, it has the "enabled" attribute set to false so it will be ignored . For each site backup, the following configuration attributes can be specified:

The "users" cache above doesn’t know on which cache on the remote sites its data is being replicated. By default the remote site writes the backup data to a cache having the same name as the originator, i.e. "users". This behaviour can be overridden with an "backupFor" element. For example the following configuration in SFO makes the "usersLONBackup" cache act as the backup cache for the "users" cache defined above in the LON site:

In order to allow inter-site calls, the RELAY2 protocol needs to be added to the protocol stack defined in the jgroups configuration (see attached jgroups.xml for an example).

The RELAY2 configuration file is linked from the jgroups.xml (see attached relay2.xml). It defines the sites seen by this cluster and also the JGroups configuration file that is used by RELAY2 in order to communicate with the remote sites.

For both transactional and non-transactional caches, the backup calls are performed in parallel with local cluster calls, e.g. if we write data to node N1 in LON then replication to the local nodes N2 and N3 and remote backup sites SFO and NYC happen in parallel.

In the case of non-transactional caches the replication happens during each operation. Given that data is sent in parallel to backups and local caches, it is possible for the operations to succeed locally and fail remotely, or the other way, causing inconsistencies

For synchronous transactional caches, Red Hat Data Grid internally uses a two phase commit protocol: lock acquisition during the 1st phase (prepare) and apply changes during the 2nd phase (commit). For asynchronous caches the two phases are merged, the "apply changes" message being sent asynchronously to the owners of data. This 2PC protocol maps to 2PC received from the JTA transaction manager. For transactional caches, both optimistic and pessimistic, the backup to remote sites happens during the prepare and commit phase only.

In this scenario the backup call happens during local commit phase(2nd phase). That means that if the local prepare fails, no remote data is being sent to the remote backup.

In this case there are two backup calls:

In the case of asynchronous local clusters, the backup data is sent during the commit phase. If the backup call fails and the "backupFailurePolicy" is set to "FAIL" then the user is notified through an exception.

You can configure Red Hat Data Grid to expire entries, which controls the amount of time entries remain in the cache.

In active/active configurations, concurrent writes to the same key results in deadlocks or conflicts.

In synchronous mode (SYNC), concurrent writes result in deadlocks because both sites lock the same key in different orders. To resolve deadlocks, client applications must wait until the locks time out.

In asynchronous mode (ASYNC), concurrent writes result in conflicting values because sites replicate after entries are modified locally. There is no guaranteed order for asynchronous replication operations so the following outcomes are possible:

In all cases, inconsistencies in key values are resolved after the next non-conflicting PUT operation updates the value.

If backing up to a site fails for a certain number of times during a time interval, then it is possible to automatically mark that site as offline. When a site is marked as offline the local site won’t try to backup data to it anymore. In order to be taken online a system administrator intervention being required.

The following configuration provides an example for taking sites offline:

The take-offline element under the backup configures the taking offline of a site:

The equivalent programmatic configuration is:

After taking sites offline, invoke the bringSiteOnline(siteName) operation via the following JMX MBeans to bring sites back online:

The bringSiteOnline(siteName) operation enables replication only and does not do a full update. For this reason, when you bring sites back online, they only contain new entries. You should push transfer to sites after you bring them online to synchronize the most recent data.

Pushing state transfer brings sites back online. You can do that instead of invoking bringSiteOnline(siteName).

Transferring state from one site to another synchronizes the data between the two sites.

Caches on sites to which you transfer state from another site do not need to be empty. However, state transfer only overwrites existing keys on receiving sites and does not delete keys.

You can receive state transfer from only one site at a time. Likewise, if you invoke a state transfer operation on a site, Red Hat Data Grid ignores subsequent invocations on that site.

Invoke the pushState(String) operation via the following JMX MBeans to bring sites back online:

When you invoke the pushState(String) operation on the site that transfers state, you specify the name of the site that receives the state.

The following figure shows the pushState(String) operation in JConsole: 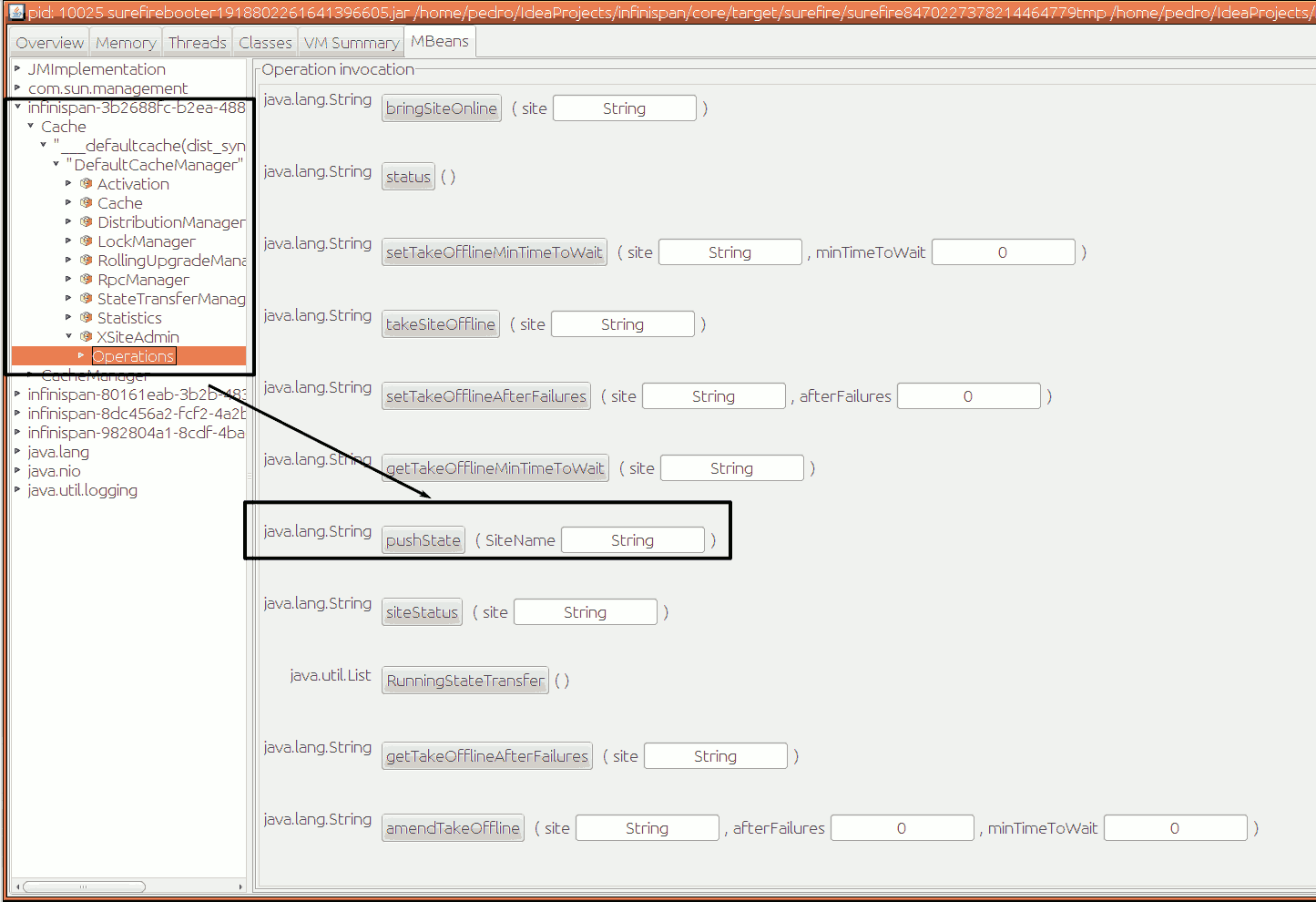 A set of operations can be performed to control the cross-site state transfer:

State transfer between sites cannot be enabled or disabled but it allows to tune some parameters. The values shown below are the default values:

The equivalent programmatic configuration is:

Below, it is the parameters description:

This document describes the technical design of cross site replication in more detail.