Network Partitions occur when a cluster breaks into two or more partitions. As a result, the nodes in each partition are unable to locate or communicate with nodes in the other partitions. This results in an unintentionally partitioned network.

By default, Partition Handling is disabled in JBoss Data Grid. During a network partition, the partitions continue to remain Available [A], at the cost of Consistency [C].

However, when Partition Handling is enabled, JBoss Data Grid prioritizes consistency [C] of data over Availability [A].

In JBoss Data Grid’s replication mode, however, owners is always equal to the number of nodes in the cache, because each node contains a copy of every data item in the cache in this mode.

In certain cases, a number of nodes greater than the value of owners can disappear from the cache. Two common reasons for this are:

43.2. Detecting and Recovering from a Split-Brain Problem

When a Split-Brain occurs in the data grid, each network partition installs its own JGroups view with nodes from other partitions removed. The partitions remain unaware of each other, therefore there is no way to determine how many partitions the network has split into. Red Hat JBoss Data Grid assumes that the cache has unexpectedly split if one or more nodes disappear from the JGroups cache without sending an explicit leaving message, while in reality the cause can be physical (crashed switches, cable failure, etc.) to virtual (stop-the-world garbage collection).

This state is dangerous because each of the newly split partitions operates independently and can store conflicting updates for the same data entries.

When Partition Handling mode is enabled (see Configure Partition Handling for instructions) and JBoss Data Grid suspects that one or more nodes are no longer accessible, each partition does not start a rebalance immediately, but first it checks whether it should enter degraded mode instead. To enter Degraded Mode, one of the following conditions must be true:

If neither of the conditions are met, the partition continues normal operations and JBoss Data Grid attempts to rebalance its nodes. Based on these conditions, at most one partition can remain in Available mode. Other partitions will enter Degraded Mode.

A possible limitation is that if two partitions start as isolated partitions and do not merge, they can read and write inconsistent data. JBoss Data Grid does not identify such partitions as split partitions.

Data consistency can be at risk from the time (t1) when the cache physically split to the time (t2) when JBoss Data Grid detects the connectivity change and changes the state of the partitions:

When partitions merge after a network partition has occurred:

Between the time (t1) when partitions begin merging to the time (t2) when the merge is complete, nodes reconnect through a series of merge events. During this time window, it is possible that a node can be reported as having temporarily left the cluster. For a Transactional cache, if during this window between t1 and t2, such a node is executing a transaction that spans other nodes, then this transaction may not execute on the remote node, but still succeed on the originating node. The result is a potential stale value for affected entries on a node that did not commit this transaction.

After t2, once the merge has completed on all nodes, this situation will not occur for subsequent transactions. However, an inconsistency introduced on entries that were affected by a transaction in progress during the time window between t1 and t2 is not resolved until these entries are subsequently updated or deleted. Until then, a read on such impacted entries can potentially return the stale value.

When using the FD_ALL protocol a given node becomes suspected after the following amount of milliseconds have passed:

The amount of time taken in the formulas above is how long it takes JBoss Data Grid to install a cluster view without the leavers; however, as JBoss Data Grid runs inside a JVM excessive Garbage Collection (GC) times can increase this time beyond the failure detection outlined above. JBoss Data Grid has no control over these GC times, and excessive GC on the coordinator can delay this detection by an amount equal to the GC time.

After a split occurs JBoss Data Grid will merge the partitions back, and the maximum time to detect a merge after the network partition is healed is:

In some cases multiple merges will occur after a split so that the cluster may contain all available partitions. In this case, where multiple merges occur, time should be allowed for all of these to complete, and as there may be as many as three merges occurring sequentially the total delay should be no more than the following:

The amount of time taken in the formulas above is how long it takes JBoss Data Grid to install a cluster view without the leavers; however, as JBoss Data Grid runs inside a JVM excessive Garbage Collection (GC) times can increase this time beyond the failure detection outlined above. JBoss Data Grid has no control over these GC times, and excessive GC on the coordinator can delay this detection by an amount equal to the GC time.

In addition, when merging cluster views JBoss Data Grid tries to confirm all members are present; however, there is no upper bound on waiting for these responses, and merging the cluster views may be delayed due to networking issues.

Red Hat JBoss Data Grid cannot distinguish whether a node left the cluster because of a process or machine crash, or because of a network failure.

If a single node exits the cluster, and if the value of owners is greater than 1, the cluster remains available and JBoss Data Grid attempts to create new replicas of the lost data. However, if additional nodes crash during this rebalancing process, it is possible that for some entries, all copies of its data have left the node and therefore cannot be recovered.

The recommended way to protect the data grid against successive crashed nodes is to enable partition handling (see Configure Partition Handling for instructions) and to set an appropriately high value for owners to ensure that even if a large number of nodes leave the cluster in rapid succession, JBoss Data Grid is able to rebalance the nodes to recover the lost data.

The first example scenario includes a four-node distributed cache that contains four data entries (k1, k2, k3, and k4). For this cache, owners equals 3, which means that each data entry must have three copies on various nodes in the cache.

Figure 43.1. Cache Before and After a Network Partition 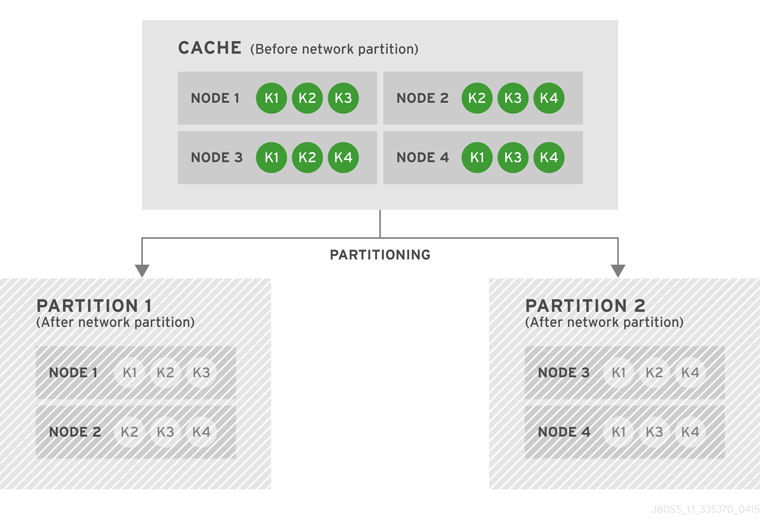 As seen in the diagram, after the network partition occurs, Node 1 and Node 2 form Partition 1 while Node 3 and Node 4 form a Partition 2. After the split, the two partitions enter into Degraded Mode (represented by grayed-out nodes in the diagram) because neither has at least 3 (the value of owners) nodes left from the last stable view. As a result, none of the four entries (k1, k2, k3, and k4) are available for reads or writes. No new entries can be written in either degraded partition, as neither partition can store 3 copies of an entry.

Figure 43.2. Cache After Partitions Are Merged

The second example scenario includes a distributed cache with four nodes. In this scenario, owners equals 2, so the four data entries (k1, k2, k3 and k4) have two copies each in the cache.

Figure 43.3. Cache Before and After a Network Partition 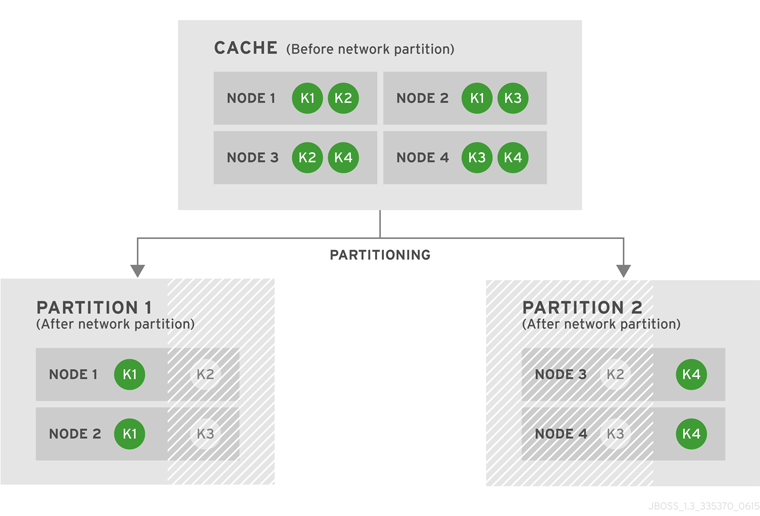 Figure 43.4. Cache After Partitions Are Merged

The third example scenario includes a distributed cache with five nodes and with owners equal to 3.

Figure 43.5. Cache Before and After a Network Partition 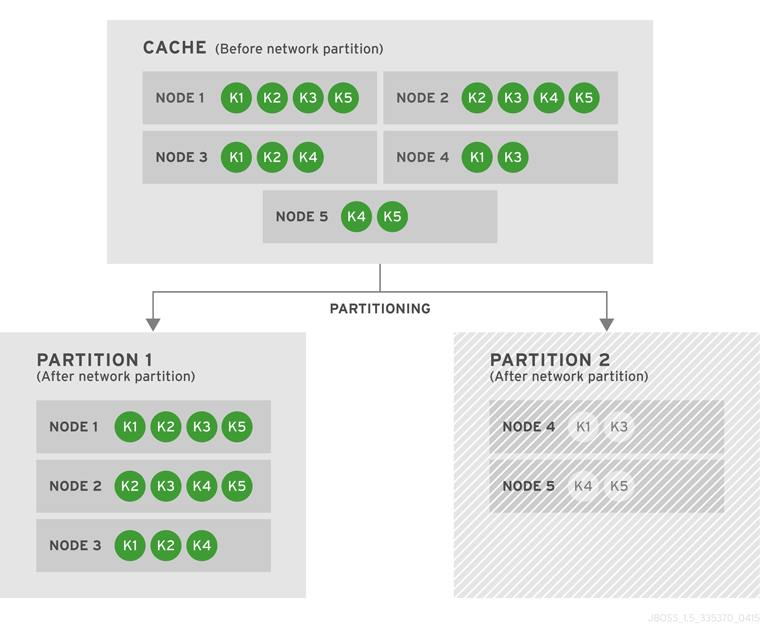 No new entries can be added to Partition 2 because this partition is Degraded and it cannot own all copies of the data.

Figure 43.6. Partition 1 Rebalances and Another Entry is Added 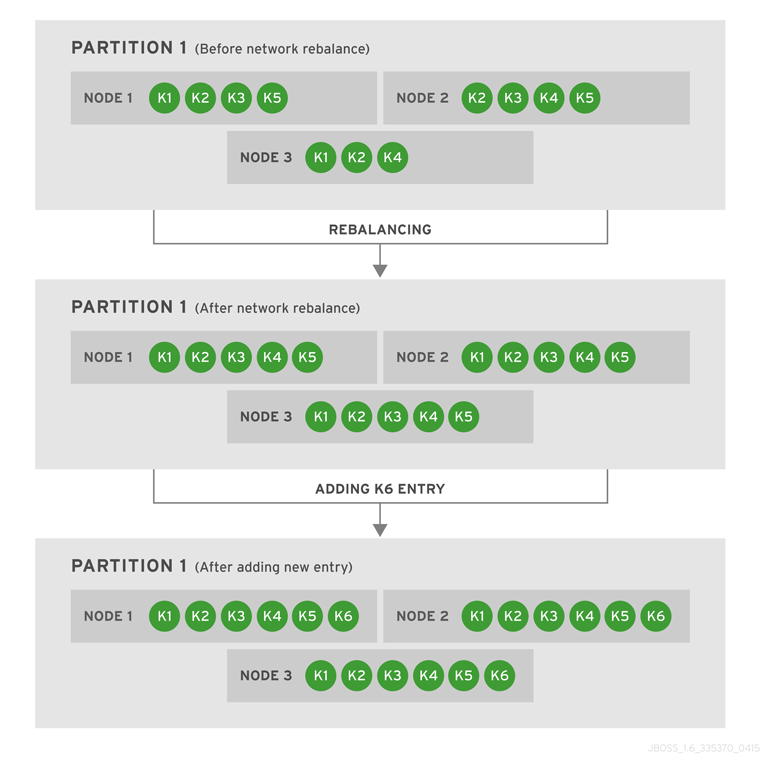 After the partition split, Partition 1 retains the majority of nodes and therefore can rebalance itself by creating copies to replace the missing entries. As displayed in the diagram above, rebalancing ensures that there are three copies of each entry (owners equals 3) in the cache. As a result, each of the three nodes contains a copy of every entry in the cache. Next, we add a new entry, k6, to the cache. Since the owners value is still 3, and there are three nodes in Partition 1, each node includes a copy of k6.

Figure 43.7. Cache After Partitions Are Merged

Eventually, Partition 1 and 2 are merged into a cache. Since only three copies are required for each data entry (owners=3), JBoss Data Grid rebalances the nodes so that the data entries are distributed between the four nodes in the cache. The new combined cache becomes fully available.

The fourth example scenario includes a replicated cache with four nodes and with owners equal to 4.

Figure 43.8. Cache Before and After a Network Partition 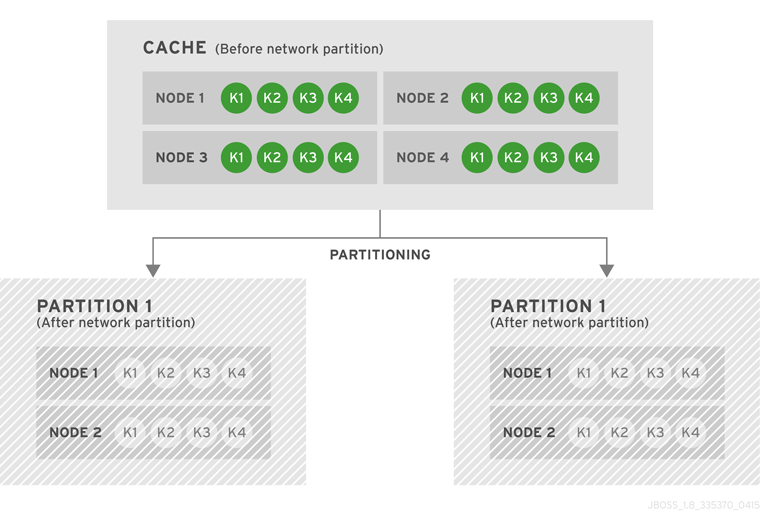 After a network partition occurs, Partition 1 contains Node 1 and Node 2 while Node 3 and Node 4 are in Partition 2. Both partitions enter Degraded Mode because neither has a simple majority of nodes. All four keys (k1, k2, k3, and k4 are unavailable for reads and writes because neither of the two partitions owns all copies of any of the four keys.

Figure 43.9. Cache After Partitions Are Merged

JBoss Data Grid subsequently merges the two split partitions into a single cache. No state transfer is required and the cache returns to its original state in Available Mode with four nodes and four data entries (k1, k2, k3, and k4).

The fifth example scenario includes a replicated cache with five nodes and with owners equal to 5.

Figure 43.10. Cache Before and After a Network Partition 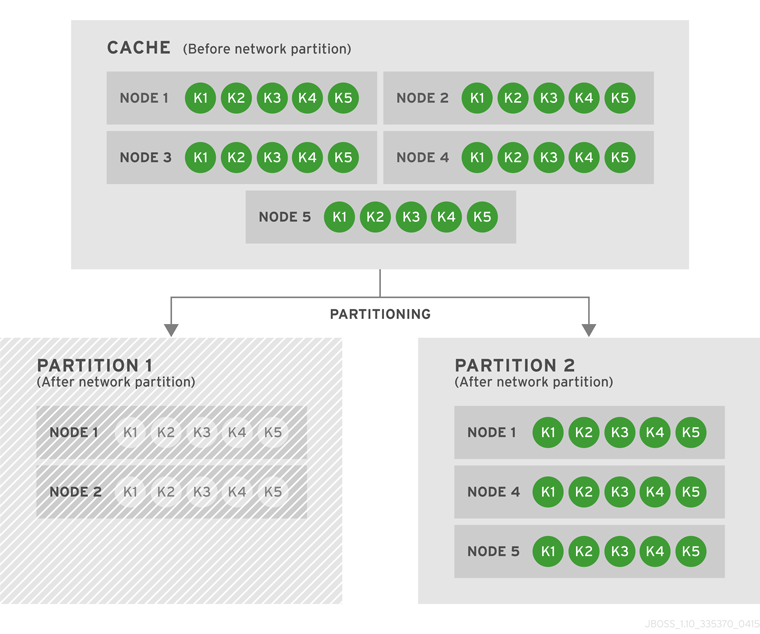 After a network partition occurs, the cache splits into two partitions. Partition 1 contains Node 1 and Node 2 and Partition 2 includes Node 3, Node 4, and Node 5. Partition 1 enters Degraded Mode (indicated by the grayed-out nodes) because it does not contain the majority of nodes. Partition 2, however, remains available.

Figure 43.11. Both Partitions Are Merged Into One Cache 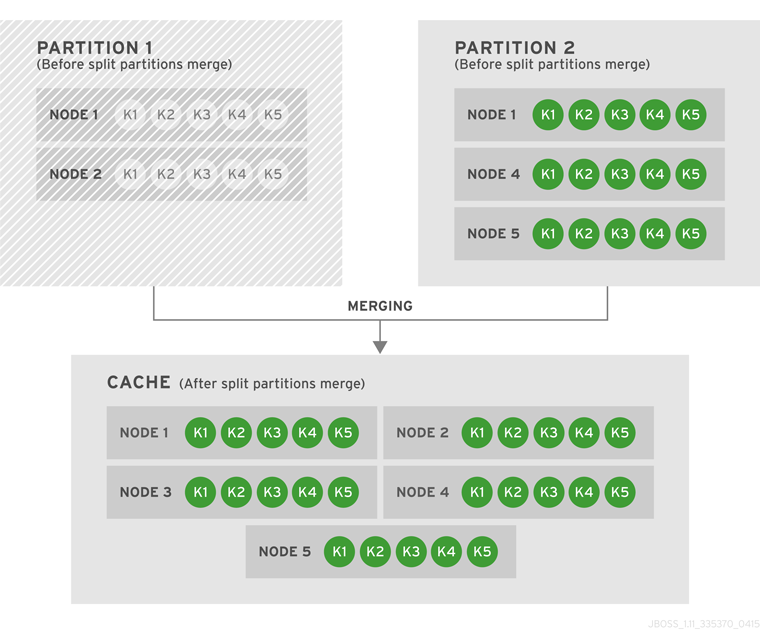 The sixth scenario is for a replicated cache with eight nodes and owners equal to 8.

Figure 43.12. Cache Before and After a Network Partition 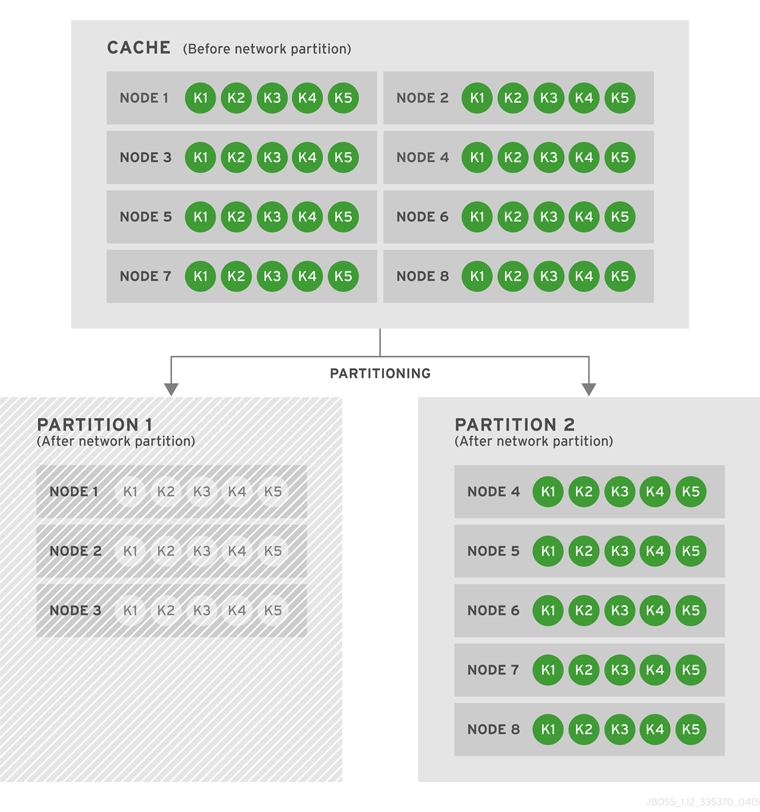 Figure 43.13. Partition 2 Further Splits into Partitions 2A and 2B 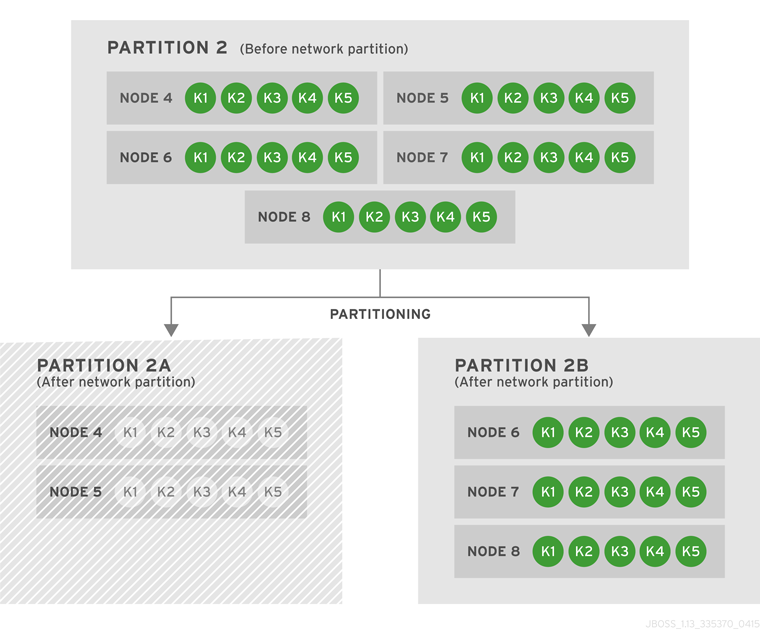 There are four potential resolutions for the caches from this scenario: 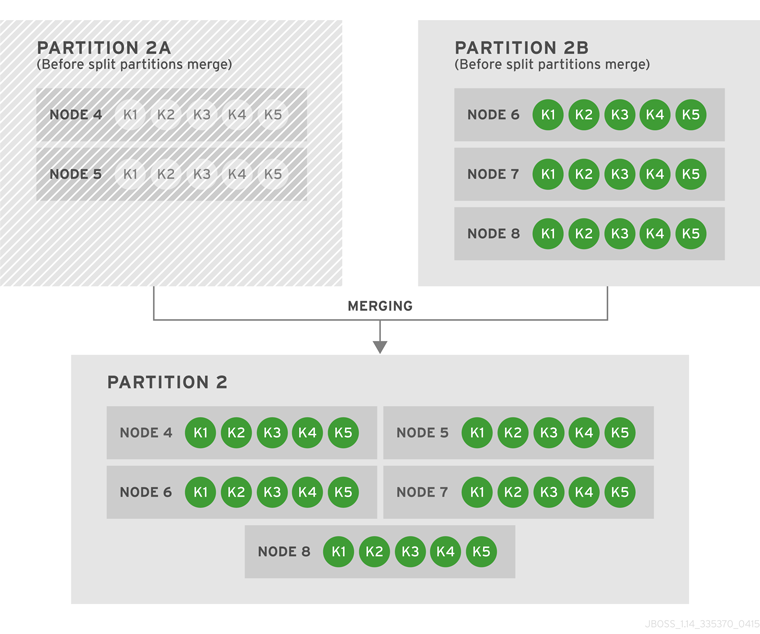 The first potential resolution to the partitioned network involves Partition 2B’s state information being copied into Partition 2A. The result is Partition 2, which contains Node 5, Node 6, Node 7, and Node 8. The newly merged partition becomes Available. 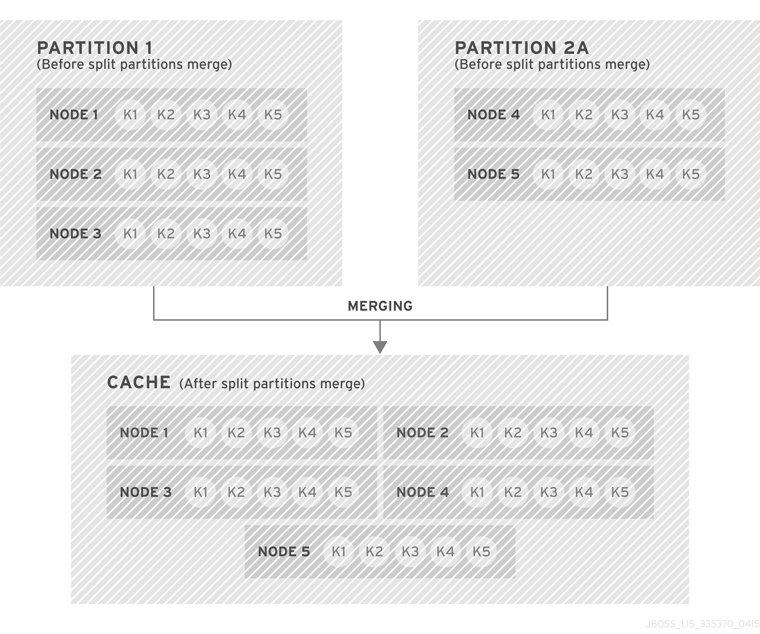 The second potential resolution to the partitioned network involves Partition 1 and Partition 2A merging. The combined partition contains Node 1, Node 2, Node 3, Node 4, and Node 5. As neither partition has the latest stable topology, the resulting merged partition remains in Degraded mode. 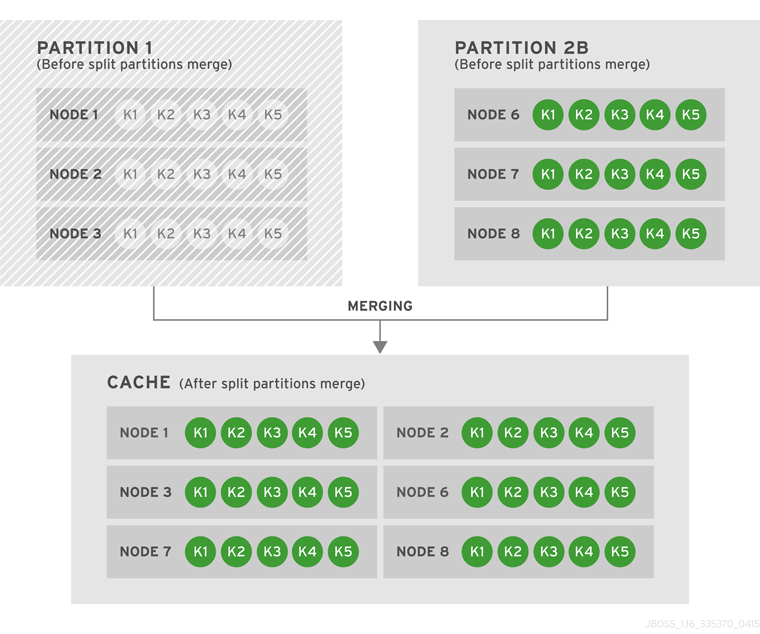 The third potential resolution to the partitioned network involves Partition 1 and Partition 2B merging. Partition 1 receives state information from Partition 2B, and the combined partition becomes Available. 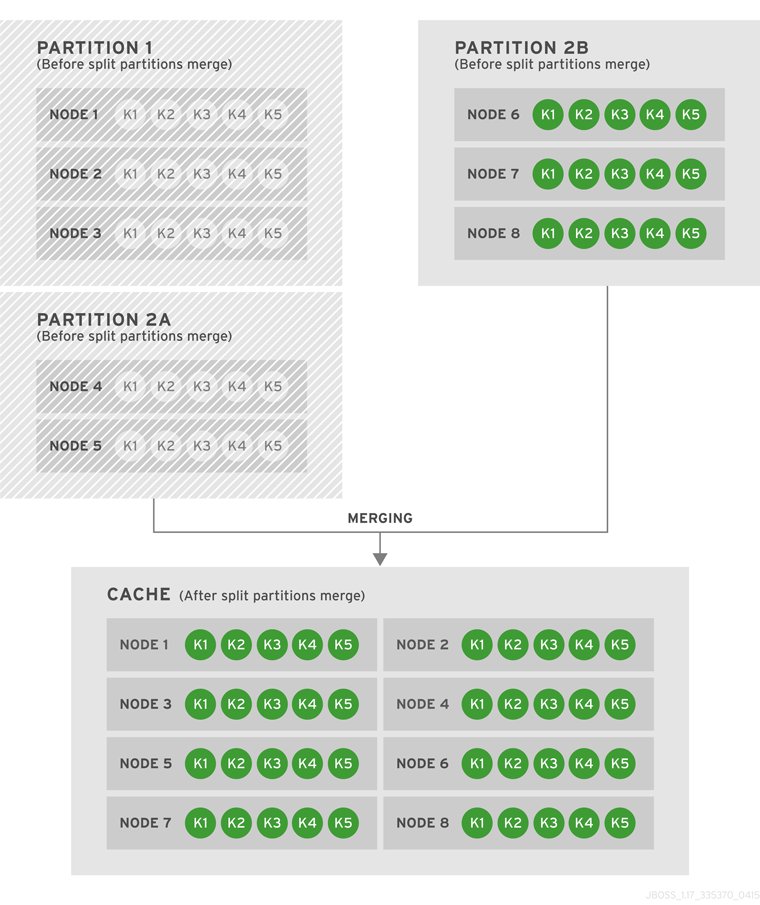 The fourth and final potential resolution to the partitioned network involves Partition 1, Partition 2A, and Partition 2B merging to form Partition 1. The state is transferred from Partition 2B to both partitions 1 and 2A. The resulting cache contains eight nodes (Node 1, Node 2, Node 3, Node 4, Node 5, Node 6, Node 7, and Node 8) and is Available.

In Red Hat JBoss Data Grid, partition handling is disabled as a default.