Red Hat Certificate System is based on many public and standard protocols and RFCs, to ensure the best possible performance and interoperability. The major standards and protocols used or supported by Certificate System 9 are outlined in this chapter, to help administrators plan their client services effectively. 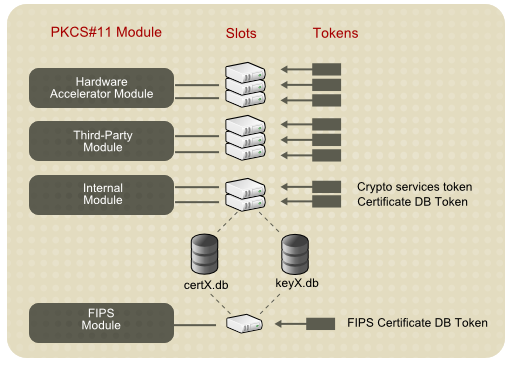 Two cryptographic modules are included in the Certificate System:
Any PKCS #11 module can be used with the Certificate System. To use an external hardware token with a subsystem, load its PKCS #11 module before the subsystem is configured, and the new token is available to the subsystem.
Available PKCS #11 modules are tracked in the secmod.db database for the subsystem. The modutil utility is used to modify this file when there are changes to the system, such as installing a hardware accelerator to use for signing operations. For more information on modutil, see http://www.mozilla.org/projects/security/pki/nss/tools/.
PKCS #11 hardware devices also provide key backup and recovery features for the information stored on hardware tokens. Refer to the PKCS #11 vendor documentation for information on retrieving keys from the tokens.