Placement Groups (PGs) are invisible to Ceph clients, but they play an important role in Ceph Storage Clusters.

A Ceph Storage Cluster may require many thousands of OSDs to reach an exabyte level of storage capacity. Ceph clients store objects in pools, which are a logical subset of the overall cluster. The number of objects stored in a pool may easily run into the millions and beyond. A system with millions of objects or more cannot realistically track placement on a per-object basis and still perform well. Ceph assigns objects to placement groups, and placement groups to OSDs to make re-balancing dynamic and efficient. 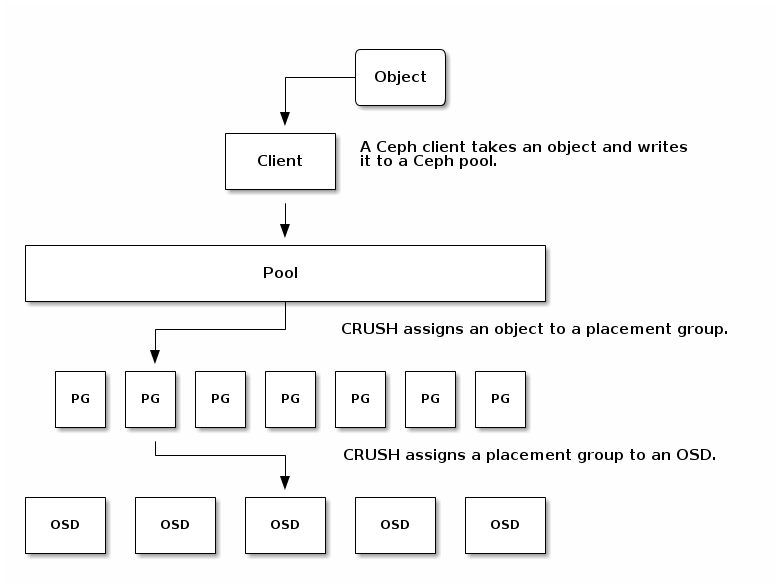 When you increase the number of object replicas or coding chunks, CRUSH will assign each placement group to additional OSDs as required.

PGs do not own OSDs. CRUSH assigns many placement groups to each OSD pseudo-randomly to ensure that data gets distributed evenly across the cluster.

Data durability and data distribution among all OSDs call for more placement groups but their number should be reduced to the minimum required for maximum performance to conserve CPU and memory resources.

Ceph strives to prevent the permanent loss of data. However, after an OSD fails, the risk of permanent data loss increases until the data it contained is fully recovered. Permanent data loss, though rare, is still possible. The following scenario describes how Ceph could permanently lose data in a single placement group with three copies of the data:

Hardware failure isn’t an exception, but an expectation. To prevent the foregoing scenario, ideally the recovery process should be as fast as reasonably possible. The size of your cluster, your hardware configuration and the number of placement groups play an important role in total recovery time.

The total recovery time depends upon the hardware supporting the pool. For example, in a 10 OSD cluster, if a host contains one OSD with a 1TB SSD, and a 10GB/s switch connects each of the 10 hosts, the recovery time will take M minutes. By contrast, if a host contains two SATA OSDs and a 1GB/s switch connects the five hosts, recovery will take substantially longer. Interestingly, in a cluster of this size, the number of placement groups has almost no influence on data durability. The placement group count could be 128 or 8192 and the recovery would not be slower or faster.

However, growing the same Ceph cluster to 20 OSDs instead of 10 OSDs is likely to speed up recovery and therefore improve data durability significantly. Why? Each OSD now participates in only 75 placement groups instead of 150. The 20 OSD cluster will still require all 19 remaining OSDs to perform the same amount of copy operations in order to recover. In the 10 OSD cluster, each OSDs had to copy approximately 100GB. In the 20 OSD cluster each OSD only has to copy 50GB each. If the network was the bottleneck, recovery will happen twice as fast. In other words, recovery time decreases as the number of OSDs increases.

No matter how short the recovery time, there is a chance for another OSD storing the placement group to fail while recovery is in progress.

In the 10 OSD cluster described above, if any OSD fails, then approximately 8 placement groups (i.e. 75 pgs / 9 osds being recovered) will only have one surviving copy. And if any of the 8 remaining OSDs fail, the last objects of one placement group are likely to be lost (i.e. 8 pgs / 8 osds with only one remaining copy being recovered). This is why starting with a somewhat larger cluster is preferred (e.g., 50 OSDs).

When the size of the cluster grows to 20 OSDs, the number of placement groups damaged by the loss of three OSDs drops. The second OSD lost will degrade approximately 2 (i.e. 35 pgs / 19 osds being recovered) instead of 8 and the third OSD lost will only lose data if it is one of the two OSDs containing the surviving copy. In other words, if the probability of losing one OSD is 0.0001% during the recovery time frame, it goes from 8 * 0.0001% in the cluster with 10 OSDs to 2 * 0.0001% in the cluster with 20 OSDs. Having 512 or 4096 placement groups is roughly equivalent in a cluster with less than 50 OSDs as far as data durability is concerned.

In a nutshell, more OSDs means faster recovery and a lower risk of cascading failures leading to the permanent loss of a placement group and its objects.

When you add an OSD to the cluster, it may take a long time top populate the new OSD with placement groups and objects. However there is no degradation of any object and adding the OSD has no impact on data durability.

Ceph seeks to avoid hot spots—​i.e., some OSDs receive substantially more traffic than other OSDs. Ideally, CRUSH assigns objects to placement groups evenly so that when the placement groups get assigned to OSDs (also pseudo randomly), the primary OSDs store objects such that they are evenly distributed across the cluster and hot spots and network over-subscription problems cannot develop because of data distribution.

For instance, if there was only one a placement group with ten OSDs in a three replica pool, Ceph would only use three OSDs to store data because CRUSH would have no other choice. When more placement groups are available, CRUSH is more likely to be evenly spread objects across OSDs. CRUSH also evenly assigns placement groups to OSDs.

The ratio between OSDs and placement groups usually solves the problem of uneven data distribution for Ceph clients that implement advanced features like object striping. For example, a 4TB block device might get sharded up into 4MB objects.

The ratio between OSDs and placement groups does not address uneven data distribution in other cases, because CRUSH does not take object size into account. Using the librados interface to store some relatively small objects and some very large objects can lead to uneven data distribution. For example, one million 4K objects totaling 4GB are evenly spread among 1000 placement groups on 10 OSDs. They will use 4GB / 10 = 400MB on each OSD. If one 400MB object is added to the pool, the three OSDs supporting the placement group in which the object has been placed will be filled with 400MB + 400MB = 800MB while the seven others will remain occupied with only 400MB.

For each placement group, OSDs and Ceph monitors need memory, network and CPU at all times, and even more during recovery. Sharing this overhead by clustering objects within a placement group is one of the main reasons placement groups exist.

The number of placement groups in a pool plays a significant role in how a cluster peers, distributes data and rebalances. Small clusters don’t see as many performance improvements compared to large clusters by increasing the number of placement groups. However, clusters that have many pools accessing the same OSDs may need to carefully consider PG count so that Ceph OSDs use resources efficiently.

Small clusters don’t benefit from large numbers of placement groups. So you should consider the following values:

As the number of OSDs increase, choosing the right value for pg_num and pgp_num becomes more important because it has a significant influence on the behavior of the cluster as well as the durability of the data when something goes wrong (i.e. the probability that a catastrophic event leads to data loss).

If you have more than 50 OSDs, we recommend approximately 50-100 placement groups per OSD to balance out resource usage, data durability and distribution. If you have less than 50 OSDs, choosing among the PG Count for Small Clusters is ideal. For a single pool of objects, you can use the following formula to get a baseline:

Where pool size is either the number of replicas for replicated pools or the K+M sum for erasure coded pools (as returned by ceph osd erasure-code-profile get).

You should then check if the result makes sense with the way you designed your Ceph cluster to maximize data durability, data distribution and minimize resource usage.

The result should be rounded up to the nearest power of two. Rounding up is optional, but recommended for CRUSH to evenly balance the number of objects among placement groups.

For a cluster with 200 OSDs and a pool size of 3 replicas, you would estimate your number of PGs as follows:

With 8192 placement groups distributed across 200 OSDs, that evaluates to approximately 41 placement groups per OSD. You also need to consider the number of pools you are likely to use in your cluster, since each pool will create placement groups too. Ensure that you have a reasonable maximum PG count.

The Ceph Storage Cluster has a default maximum value of 300 placement groups per OSD. You can set a different maximum value in your Ceph configuration file.

Ceph Object Gateways deploy with 10-15 pools, so you may consider using less than 100 PGs per OSD to arrive at a reasonable maximum number.

The ceph CLI allows you to set and get the number of placement groups for a pool, view the PG map and retrieve PG statistics.

To get the number of placement groups in a pool, execute the following:

To get the statistics for the placement groups in your cluster, execute the following:

To get the statistics for all placement groups stuck in a specified state, execute the following:

Inactive Placement groups cannot process reads or writes because they are waiting for an OSD with the most up-to-date data to come up and in.

Unclean Placement groups contain objects that are not replicated the desired number of times. They should be recovering.

Stale Placement groups are in an unknown state - the OSDs that host them have not reported to the monitor cluster in a while (configured by mon_osd_report_timeout).

Valid formats are plain (default) and json. The threshold defines the minimum number of seconds the placement group is stuck before including it in the returned statistics (default 300 seconds).

To retrieve statistics for a particular placement group, execute the following:

To scrub a placement group, execute the following:

Ceph checks the primary and any replica nodes, generates a catalog of all objects in the placement group and compares them to ensure that no objects are missing or mismatched, and their contents are consistent. Assuming the replicas all match, a final semantic sweep ensures that all of the snapshot-related object metadata is consistent. Errors are reported via logs.

If the cluster has lost one or more objects, and you have decided to abandon the search for the lost data, you must mark the unfound objects as lost.

If all possible locations have been queried and objects are still lost, you may have to give up on the lost objects. This is possible given unusual combinations of failures that allow the cluster to learn about writes that were performed before the writes themselves are recovered.

Currently the only supported option is "revert", which will either roll back to a previous version of the object or (if it was a new object) forget about it entirely. To mark the "unfound" objects as "lost", execute the following:

Use this feature with caution, because it may confuse applications that expect the object(s) to exist.