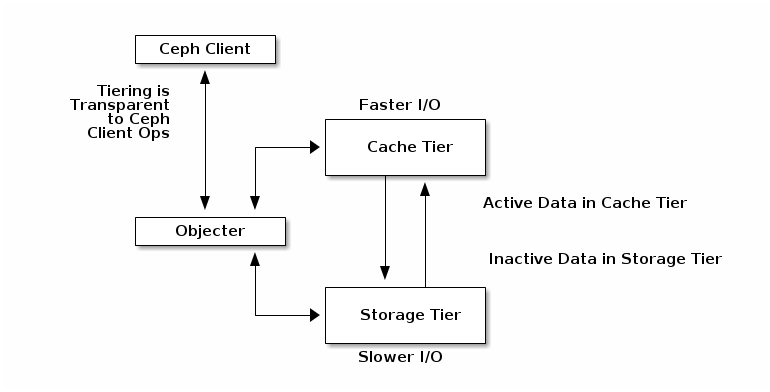 The cache tiering agent handles the migration of data between the cache tier and the backing storage tier automatically. However, admins have the ability to configure how this migration takes place. There are two main scenarios:

Since all Ceph clients can use cache tiering, it has the potential to improve I/O performance for Ceph Block Devices, Ceph Object Storage, the Ceph Filesystem and native bindings.

6.1.1. Setting Up a Backing Storage Pool

Setting up a backing storage pool typically involves one of two scenarios:

In the standard storage scenario, you can setup a CRUSH ruleset to establish the failure domain (e.g., osd, host, chassis, rack, row, etc.). Ceph OSD Daemons perform optimally when all storage drives in the ruleset are of the same size, speed (both RPMs and throughput) and type. See CRUSH Maps for details on creating a ruleset. Once you have created a ruleset, create a backing storage pool.

In the erasure coding scenario, the pool creation arguments will generate the appropriate ruleset automatically. See Create a Pool for details.

In subsequent examples, we will refer to the backing storage pool as cold-storage.

Setting up a cache pool follows the same procedure as the standard storage scenario, but with this difference: the drives for the cache tier are typically high performance drives that reside in their own servers and have their own ruleset. When setting up a ruleset, it should take account of the hosts that have the high performance drives while omitting the hosts that don’t. See CRUSH Storage Strategy Examples.

In subsequent examples, we will refer to the cache pool as hot-storage and the backing pool as cold-storage.

Setting up a cache tier involves associating a backing storage pool with a cache pool :

To set the cache mode, execute the following:

Ceph’s production cache tiers use a Bloom Filter for the hit_set_type:

The hit_set_count and hit_set_period define how much time each HitSet should cover, and how many such HitSets to store. Currently there is minimal benefit for hit_set_count > 1 since the agent does not yet act intelligently on that information. :

Binning accesses over time allows Ceph to determine whether a Ceph client accessed an object at least once, or more than once over a time period ("age" vs "temperature").

The longer the period and the higher the count, the more RAM the ceph-osd daemon consumes. In particular, when the agent is active to flush or evict cache objects, all hit_set_count HitSets are loaded into RAM.

For example, setting the value to 0.4 will begin flushing modified (dirty) objects when they reach 40% of the cache pool’s capacity:

When the cache pool reaches a certain percentage of its capacity, the cache tiering agent will evict objects to maintain free capacity. To set the cache_target_full_ratio, execute the following:

For example, setting the value to 0.8 will begin flushing unmodified (clean) objects when they reach 80% of the cache pool’s capacity:

For example, to flush or evict at 1 TB, execute the following:

To specify the maximum number of objects, execute the following:

For example, to flush or evict at 1M objects, execute the following:

If you specify both limits, the cache tiering agent will begin flushing or evicting when either threshold is triggered.

You can specify the minimum age of an object before the cache tiering agent flushes a recently modified (or dirty) object to the backing storage pool:

For example, to flush modified (or dirty) objects after 10 minutes, execute the following:

You can specify the minimum age of an object before it will be evicted from the cache tier:

For example, to evict objects after 30 minutes, execute the following:

Removing a cache tier differs depending on whether it is a writeback cache or a read-only cache.

Since a read-only cache does not have modified data, you can disable and remove it without losing any recent changes to objects in the cache.

Since a writeback cache may have modified data, you must take steps to ensure that you do not lose any recent changes to objects in the cache before you disable and remove it.