You can use Ansible to automate your Intrusion Detection and Prevention System (IDPS). For the purpose of this guide, we use Snort as the IDPS. Use Ansible automation hub to consume content collections, such as tasks, roles, and modules to create automated workflows.

Before you begin automating your IDPS with Ansible, ensure that you have the proper installations and configurations necessary to successfully manage your IDPS.

To verify that Snort has been configured successfully, call it via sudo and ask for the version:

Verify that the service is actively running via sudo systemctl:

If the Snort service is not actively running, restart it with systemctl restart snort and recheck the status.

Once you confirm the service is actively running, exit the Snort server by simultaneously pressing CTRL and D, or by typing exit on the command line. All further interaction will be done through Ansible from the Ansible control host.

2.2. Automating your IDPS rules with Ansible

To automate your IDPS, use the ids_rule role to create and change Snort rules. Snort uses rule-based language that analyzes your network traffic and compares it against the given rule set.

The following lab environment demonstrates what an Ansible security automation integration would look like. A machine called “Attacker” simulates a potential attack pattern on the target machine on which the IDPS is running.

Keep in mind that a real world setup will feature other vendors and technologies. 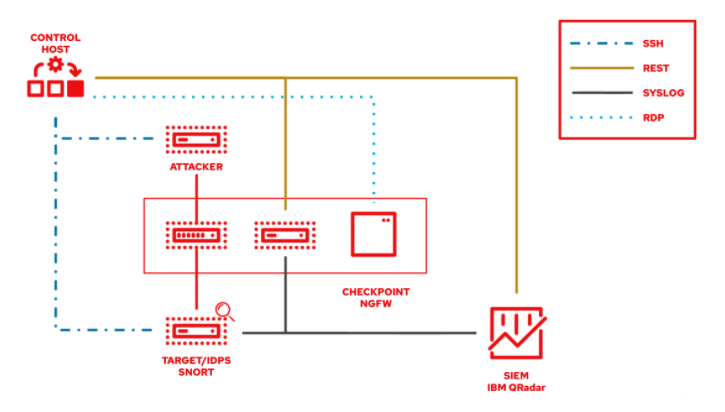 Use the ids_rule role to manage your rules and signatures for IDPS. For example, you can set a new rule that looks for a certain pattern aligning with a previous attack on your firewall.

To verify that your IDPS rules were successfully created, SSH to the Snort server and view the content of the /etc/snort/rules/local.rules file.