Having discussed the basics of Kafka, we can now look at how AMQ Streams supports Kafka using Operators to deploy and manage the components and dependencies of Kafka to OpenShift.

The Cluster Operator can deploy the Topic Operator and User Operator as part of an Entity Operator configuration at the same time as a Kafka cluster.

Operators within the AMQ Streams architecture 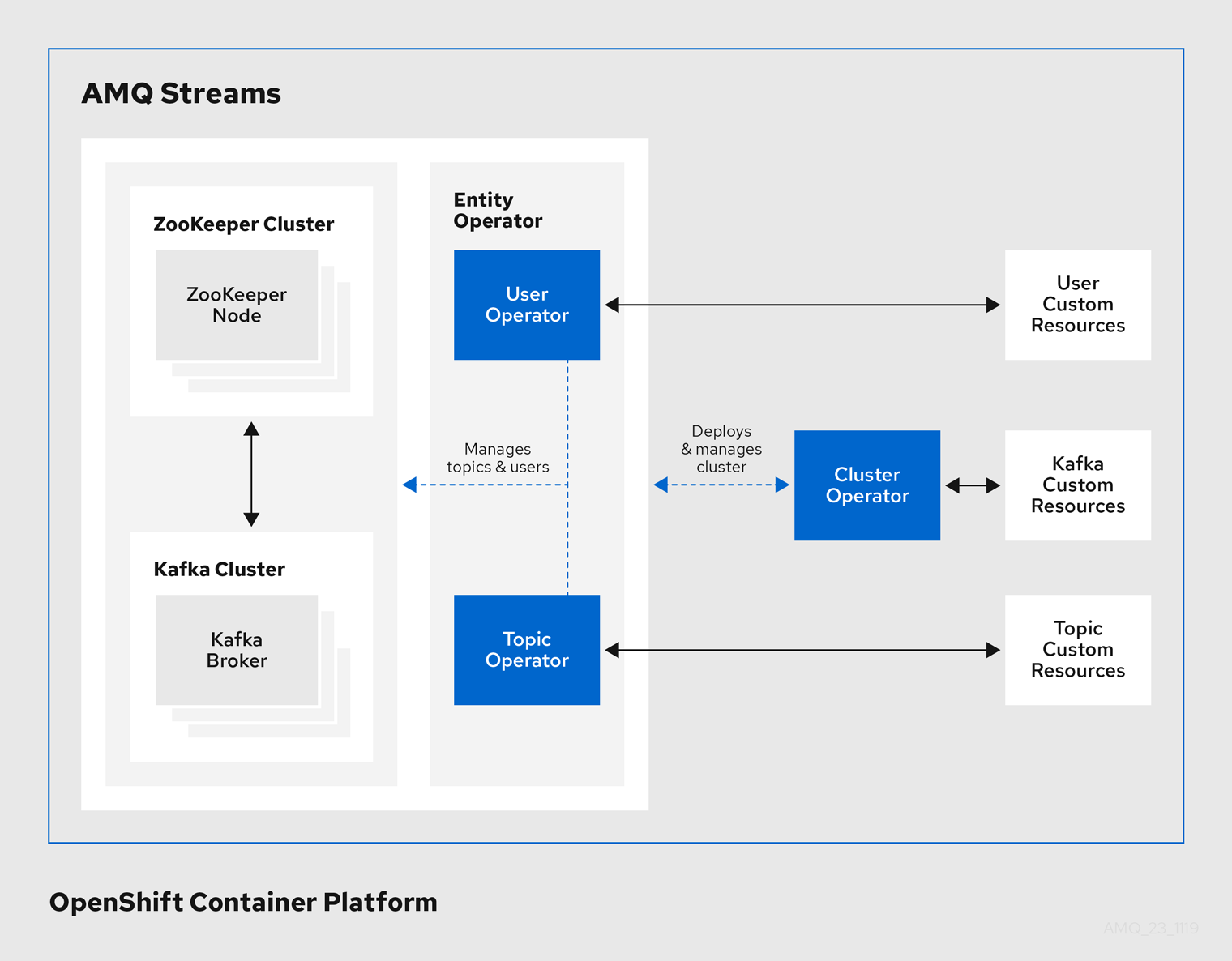 AMQ Streams uses the Cluster Operator to deploy and manage clusters for:

Custom resources are used to deploy the clusters.

For example, to deploy a Kafka cluster:

The Cluster Operator can also deploy (through configuration of the Kafka resource):

The Topic Operator and User Operator function within the Entity Operator on deployment.

Example architecture for the Cluster Operator

The Topic Operator provides a way of managing topics in a Kafka cluster through OpenShift resources.

Example architecture for the Topic Operator

Specifically, if a KafkaTopic is:

Working in the other direction, if a topic is:

This allows you to declare a KafkaTopic as part of your application’s deployment and the Topic Operator will take care of creating the topic for you. Your application just needs to deal with producing or consuming from the necessary topics.

If the topic is reconfigured or reassigned to different Kafka nodes, the KafkaTopic will always be up to date.

The User Operator manages Kafka users for a Kafka cluster by watching for KafkaUser resources that describe Kafka users, and ensuring that they are configured properly in the Kafka cluster.

For example, if a KafkaUser is:

The User Operator allows you to declare a KafkaUser resource as part of your application’s deployment. You can specify the authentication and authorization mechanism for the user. You can also configure user quotas that control usage of Kafka resources to ensure, for example, that a user does not monopolize access to a broker.

When the user is created, the user credentials are created in a Secret. Your application needs to use the user and its credentials for authentication and to produce or consume messages.

In addition to managing credentials for authentication, the User Operator also manages authorization rules by including a description of the user’s access rights in the KafkaUser declaration.