After installing OpenShift Container Platform, you can further expand and customize your cluster to your requirements, including taking steps to prepare for users.

As an administrator, you can configure OAuth to specify an identity provider after you install your cluster.

By default, only a kubeadmin user exists on your cluster. To specify an identity provider, you must create a custom resource (CR) that describes that identity provider and add it to the cluster.

OpenShift Container Platform user names containing /, :, and % are not supported.

You can configure the following types of identity providers:

After you define an identity provider, you can use RBAC to define and apply permissions.

The following parameters are common to all identity providers:

When adding or changing identity providers, you can map identities from the new provider to existing users by setting the mappingMethod parameter to add.

1
This provider name is prefixed to provider user names to form an identity name.
2
Controls how mappings are established between this provider’s identities and User objects.
3
An existing secret containing a file generated using htpasswd. 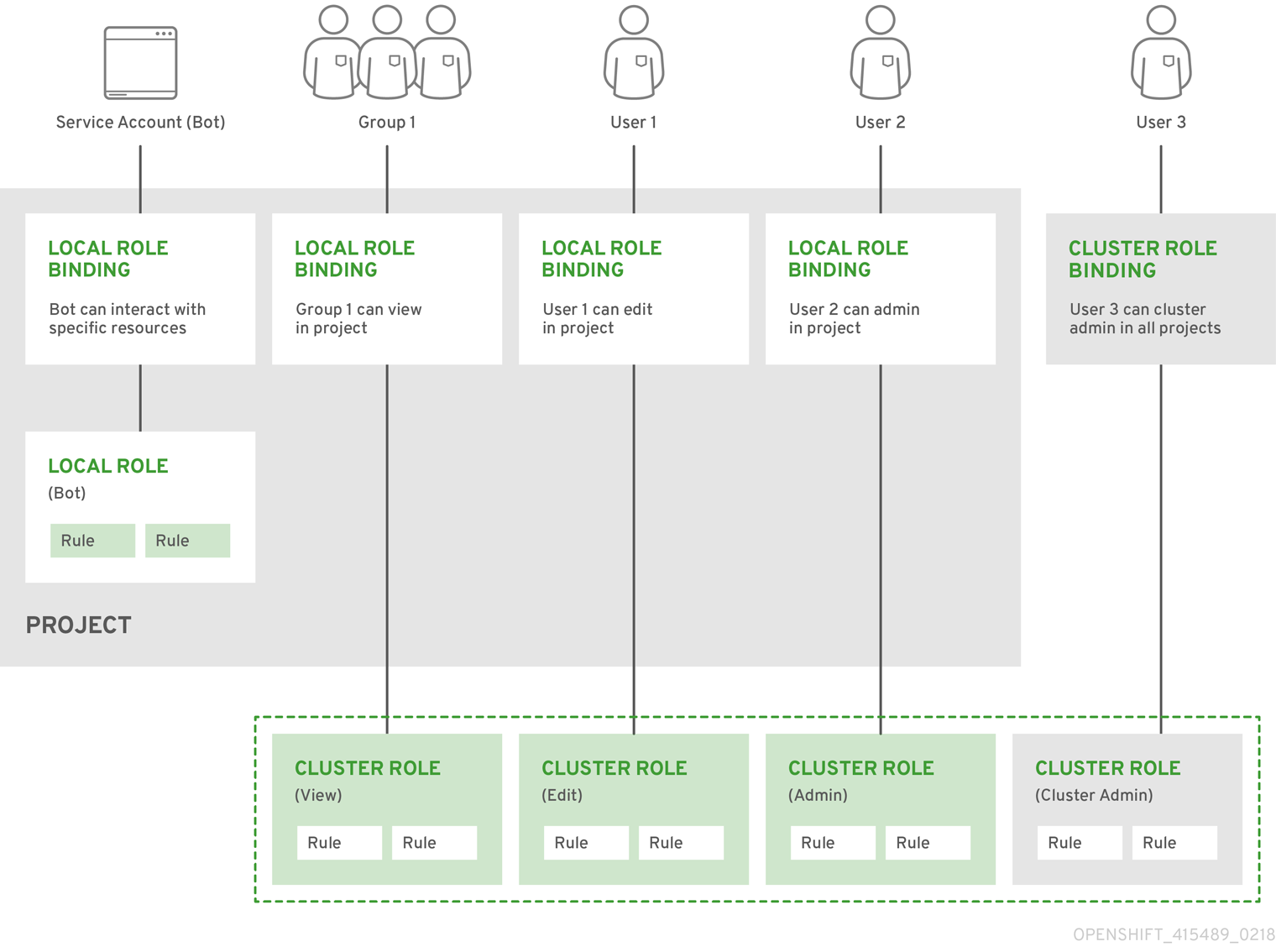 This user has the cluster-admin role automatically applied and is treated as the root user for the cluster. The password is dynamically generated and unique to your OpenShift Container Platform environment. After installation completes the password is provided in the installation program’s output. For example:

After you define an identity provider and create a new cluster-admin user, you can remove the kubeadmin to improve cluster security.

If you follow this procedure before another user is a cluster-admin, then OpenShift Container Platform must be reinstalled. It is not possible to undo this command.

The image.config.openshift.io/cluster resource holds cluster-wide information about how to handle images. The canonical, and only valid name is cluster. Its spec offers the following configuration parameters.

When the allowedRegistries parameter is defined, all registries, including registry.redhat.io and quay.io registries and the default internal image registry, are blocked unless explicitly listed. When using the parameter, to prevent pod failure, add all registries including the registry.redhat.io and quay.io registries and the internalRegistryHostname to the allowedRegistries list, as they are required by payload images within your environment. For disconnected clusters, mirror registries should also be added.

The status field of the image.config.openshift.io/cluster resource holds observed values from the cluster.

The image.config.openshift.io/cluster custom resource can contain a reference to a config map that contains additional certificate authorities to be trusted during image registry access.

You can create a config map in the openshift-config namespace and use its name in AdditionalTrustedCA in the image.config.openshift.io custom resource to provide additional CAs that should be trusted when contacting external registries.

The config map key is the hostname of a registry with the port for which this CA is to be trusted, and the base64-encoded certificate is the value, for each additional registry CA to trust.

1
If the registry has the port, such as registry-with-port.example.com:5000, : should be replaced with ...

You can configure additional CAs with the following procedure.

Setting up container registry repository mirroring enables you to do the following:

The attributes of repository mirroring in OpenShift Container Platform include:

Setting up repository mirroring can be done in the following ways:

The following procedure provides a post-installation mirror configuration, where you create an ImageContentSourcePolicy object that identifies:

You can only configure global pull secrets for clusters that have an ImageContentSourcePolicy object. You cannot add a pull secret to a project.

8.5. About Operator installation with OperatorHub

OperatorHub is a user interface for discovering Operators; it works in conjunction with Operator Lifecycle Manager (OLM), which installs and manages Operators on a cluster.

As a cluster administrator, you can install an Operator from OperatorHub using the OpenShift Container Platform web console or CLI. Subscribing an Operator to one or more namespaces makes the Operator available to developers on your cluster.

During installation, you must determine the following initial settings for the Operator:

You can choose automatic or manual updates.

If you choose automatic updates for an installed Operator, when a new version of that Operator is available in the selected channel, Operator Lifecycle Manager (OLM) automatically upgrades the running instance of your Operator without human intervention.

If you select manual updates, when a newer version of an Operator is available, OLM creates an update request. As a cluster administrator, you must then manually approve that update request to have the Operator updated to the new version.

You can install and subscribe to an Operator from OperatorHub using the OpenShift Container Platform web console.

8.5.2. Installing from OperatorHub using the CLI

Instead of using the OpenShift Container Platform web console, you can install an Operator from OperatorHub using the CLI. Use the oc command to create or update a Subscription object.