6.1. Controlling What Can Be Deployed in a Container

If something happens during the build process, or if a vulnerability is discovered after an image has been deployed, you can use tooling for automated, policy-based deployment. You can use triggers to rebuild and replace images instead of patching running containers, which is not recommended. 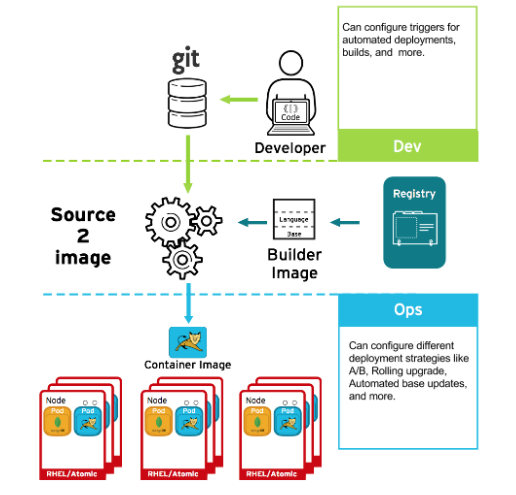 For example, you build an application using three container image layers: core, middleware, and applications. An issue is discovered in the core image and that image is rebuilt. After the build is complete, the image is pushed to the OpenShift Container Registry. OpenShift Container Platform detects that the image has changed and automatically rebuilds and deploys the application image, based on the defined triggers. This change incorporates the fixed libraries and ensures that the production code is identical to the most current image.

6.2. Controlling What Image Sources Can Be Deployed

It is important that the intended images are actually being deployed, that they are from trusted sources, and they have not been altered. Cryptographic signing provides this assurance. OpenShift Container Platform enables cluster administrators to apply security policy that is broad or narrow, reflecting deployment environment and security requirements. Two parameters define this policy:

With these policy parameters, registries or parts of registries, even individual images, may be whitelisted (accept), blacklisted (reject), or define a trust relationship using trusted public key(s) to ensure the source is cryptographically verified. The policy rules apply to nodes. Policy may be applied uniformly across all nodes or targeted for different node workloads (for example, build, zone, or environment).

The policy can be saved onto a node as /etc/containers/policy.json. This example enforces the following rules:

Signatures that use the docker transport type are served by local file or web server. These signatures are more flexible: you can serve images from any container registry and use an independent server to deliver binary signatures. According to the Signature access protocols, you access the signatures for each image directly; the root of the server directory does not display its file structure.

However, the docker transport type requires additional configuration. You must configure the nodes with the URI of the signature server by placing arbitrarily-named YAML files into a directory on the host system, /etc/containers/registries.d by default. The YAML configuration files contain a registry URI and a signature server URI, or sigstore:

In this example, the Red Hat Registry, access.redhat.com, is the signature server that provides signatures for the docker transport type. Its URI is defined in the sigstore parameter. You might name this file /etc/containers/registries.d/redhat.com.yaml and use Ansible to automatically place the file on each node in your cluster. No service restart is required since policy and registries.d files are dynamically loaded by the container runtime.

The Secret object type provides a mechanism to hold sensitive information such as passwords, OpenShift Container Platform client configuration files, dockercfg files, and private source repository credentials. Secrets decouple sensitive content from pods. You can mount secrets into containers using a volume plug-in or the system can use secrets to perform actions on behalf of a pod.

For example, to add a secret to your deployment configuration using the web console so that it can access a private image repository:

ConfigMaps are similar to secrets, but are designed to support working with strings that do not contain sensitive information. The ConfigMap object holds key-value pairs of configuration data that can be consumed in pods or used to store configuration data for system components such as controllers.

You can use security context constraints (SCCs) to define a set of conditions that a pod (a collection of containers) must run with in order to be accepted into the system.

Some aspects that can be managed by SCCs include:

If you have the required permissions, you can adjust the default SCC policies to be more permissive.

You can integrate your own continuous deployment (CD) tooling with OpenShift Container Platform.

By leveraging CI/CD and OpenShift Container Platform, you can automate the process of rebuilding the application to incorporate the latest fixes, testing, and ensuring that it is deployed everywhere within the environment.