Optimize this traffic path by:

The OpenShift Container Platform master caches deserialized versions of resources aggressively to ease CPU load. However, in smaller clusters of less than 1000 pods, this cache can waste a lot of memory for negligible CPU load reduction. The default cache size is 50,000 entries, which, depending on the size of your resources, can grow to occupy 1 to 2 GB of memory. This cache size can be reduced using the following setting the in /etc/origin/master/master-config.yaml:

The number of client requests or API calls that are sent to the API server is determined by the Queries per second (QPS) value and the number of concurrent requests that can be processed by the API server is determined by the maxRequestsInFlight setting. The number of requests the client can make in excess of the QPS rate depends on the burst value, this is helpful for applications that are bursty in nature and can make irregular number of requests. The Response times for requests might have high latencies when there are large numbers of concurrent requests being handled by the API server especially for large and/or dense clusters. It is recommended to monitor the apiserver_request_count rate metric in Prometheus and adjust the maxRequestsInFlight and QPS accordingly.

There needs to be a good balance when changing the default values as the CPU and memory consumption of API server and etcd IOPS will increase when it is handling more requests in parallel. Also note that heavy non-watch requests might overload the API server as they get cancelled after a fixed 60 second timeout and the client starts retrying.

Provided sufficient CPU and memory resources are available on the API server system(s), the API server requests overloading issue can be safely alleviated by taking into account the factors mentioned above and bumping up the maxRequestsInFlight, API qps and burst values in the *_/etc/origin/master/master-config.yaml

The OpenShift Container Platform node configuration file contains important options, such as the iptables synchronization period, the Maximum Transmission Unit (MTU) of the SDN network, and the proxy-mode. To configure your nodes, modify the appropriate node configuration map.

Do not edit the node-config.yaml file directly.

The node configuration file allows you to pass arguments to the kubelet (node) process. You can view a list of possible options by running kubelet --help.

Not all kubelet options are supported by OpenShift Container Platform, and are used in the upstream Kubernetes. This means certain options are in limited support.

See the Cluster maximums page for the maximum supported limits for each version of OpenShift Container Platform.

In the /etc/origin/node/node-config.yaml file, two parameters control the maximum number of pods that can be scheduled to a node: pods-per-core and max-pods. When both options are in use, the lower of the two limits the number of pods on a node. Exceeding these values can result in:

In Kubernetes, a pod that is holding a single container actually uses two containers. The second container is used to set up networking prior to the actual container starting. Therefore, a system running 10 pods will actually have 20 containers running.

Setting pods-per-core to 0 disables this limit.

max-pods sets the number of pods the node can run to a fixed value, regardless of the properties of the node. Cluster Limits documents maximum supported values for max-pods.

See the Sizing Considerations section in the installation documentation for the recommended limits for an OpenShift Container Platform cluster. The recommended sizing accounts for OpenShift Container Platform and container engine coordination for container status updates. This coordination puts CPU pressure on the master and container engine processes, which can include writing a large amount of log data.

The rate at which kubelet talks to API server depends on qps and burst values. The default values are good enough if there are limited pods running on each node. Provided there are enough CPU and memory resources on the node, the qps and burst values can be tweaked in the /etc/origin/node/node-config.yaml file:

The qps and burst values above are defaults for OpenShift Container Platform.

etcd is a distributed key-value store that OpenShift Container Platform uses for configuration.

In addition to changing the storage mode for new installs to v3, OpenShift Container Platform 3.6 also begins enforcing quorum reads for all OpenShift Container Platform types. This is done to ensure that queries against etcd do not return stale data. In single-node etcd clusters, stale data is not a concern. In highly available etcd deployments typically found in production clusters, quorum reads ensure valid query results. A quorum read is linearizable in database terms - every client sees the latest updated state of the cluster, and all clients see the same sequence of reads and writes. See the etcd 3.1 announcement for more information on performance improvements. 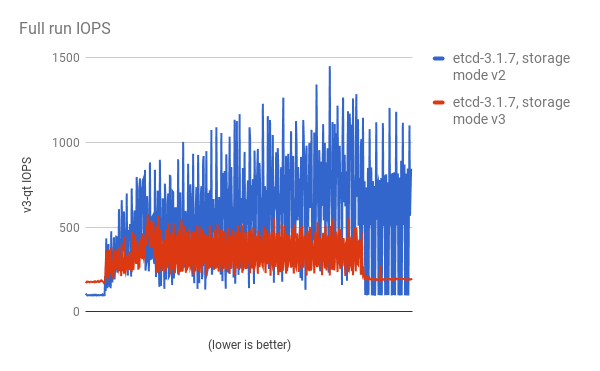 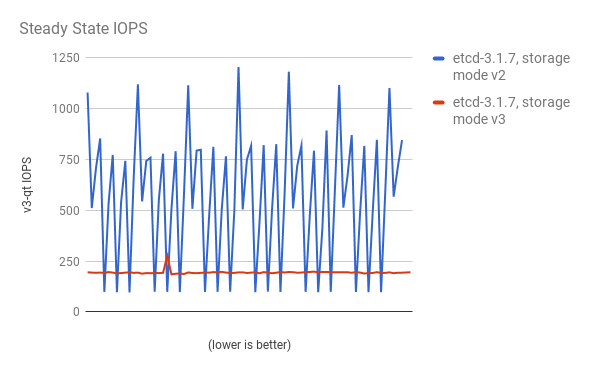 Viewing the same I/O data, plotting the average IOPS in both modes: 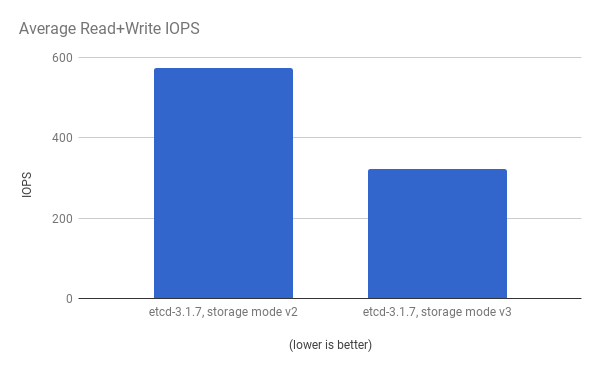 CPU utilization by both the API server (master) and etcd processes is reduced: 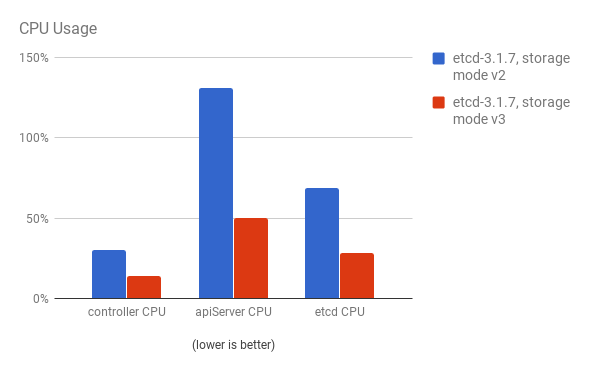 Memory utilization by both the API server (master) and etcd processes is also reduced: 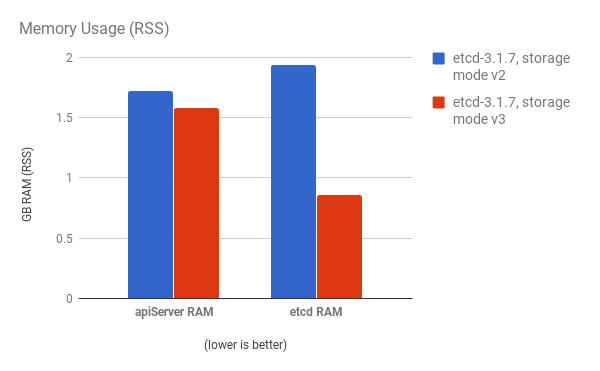 Looking at the size I/O operations done by a 3-node cluster of etcd 3.1 (using storage v3 mode and with quorum reads enforced), read sizes are as follows:

etcd processes are typically memory intensive. Master / API server processes are CPU intensive. This makes them a reasonable co-location pair within a single machine or virtual machine (VM). Optimize communication between etcd and master hosts either by co-locating them on the same host, or providing a dedicated network.

To provide fast storage to an etcd node so that etcd is stable at large scale, use PCI passthrough to pass a non-volatile memory express (NVMe) device directly to the etcd node. To set this up with Red Hat OpenStack 11 or later, complete the following on the OpenStack compute nodes where the PCI device exists.

OpenShift Container Platform leverages the tuned daemon and includes Tuned profiles called openshift, openshift-node and openshift-control-plane. These profiles safely increase some of the commonly encountered vertical scaling limits present in the kernel, and are automatically applied to your system during installation.

The Tuned profiles support inheritance between profiles. They also support an auto-parent functionality which selects a parent profile based on whether the profile is used in a virtual environment. The openshift profile uses both of these features and is a parent of openshift-node and openshift-control-plane profiles. It contains tuning relevant to both OpenShift Container Platform application nodes and control plane nodes respectively. The openshift-node and openshift-control-plane profiles are set on application and control plane nodes respectively.

The profile hierarchy with the openshift profile as a parent ensures the tuning delivered to the OpenShift Container Platform system is a union of throughput-performance (the default for RHEL) for bare metal hosts and virtual-guest for RHEL and atomic-guest for RHEL Atomic Host nodes.

To see which Tuned profile is enabled on your system, run: