OpenShift v3 is a layered system designed to expose underlying Docker-formatted container image and Kubernetes concepts as accurately as possible, with a focus on easy composition of applications by a developer. For example, install Ruby, push code, and add MySQL.

Unlike OpenShift v2, more flexibility of configuration is exposed after creation in all aspects of the model. The concept of an application as a separate object is removed in favor of more flexible composition of "services", allowing two web containers to reuse a database or expose a database directly to the edge of the network. 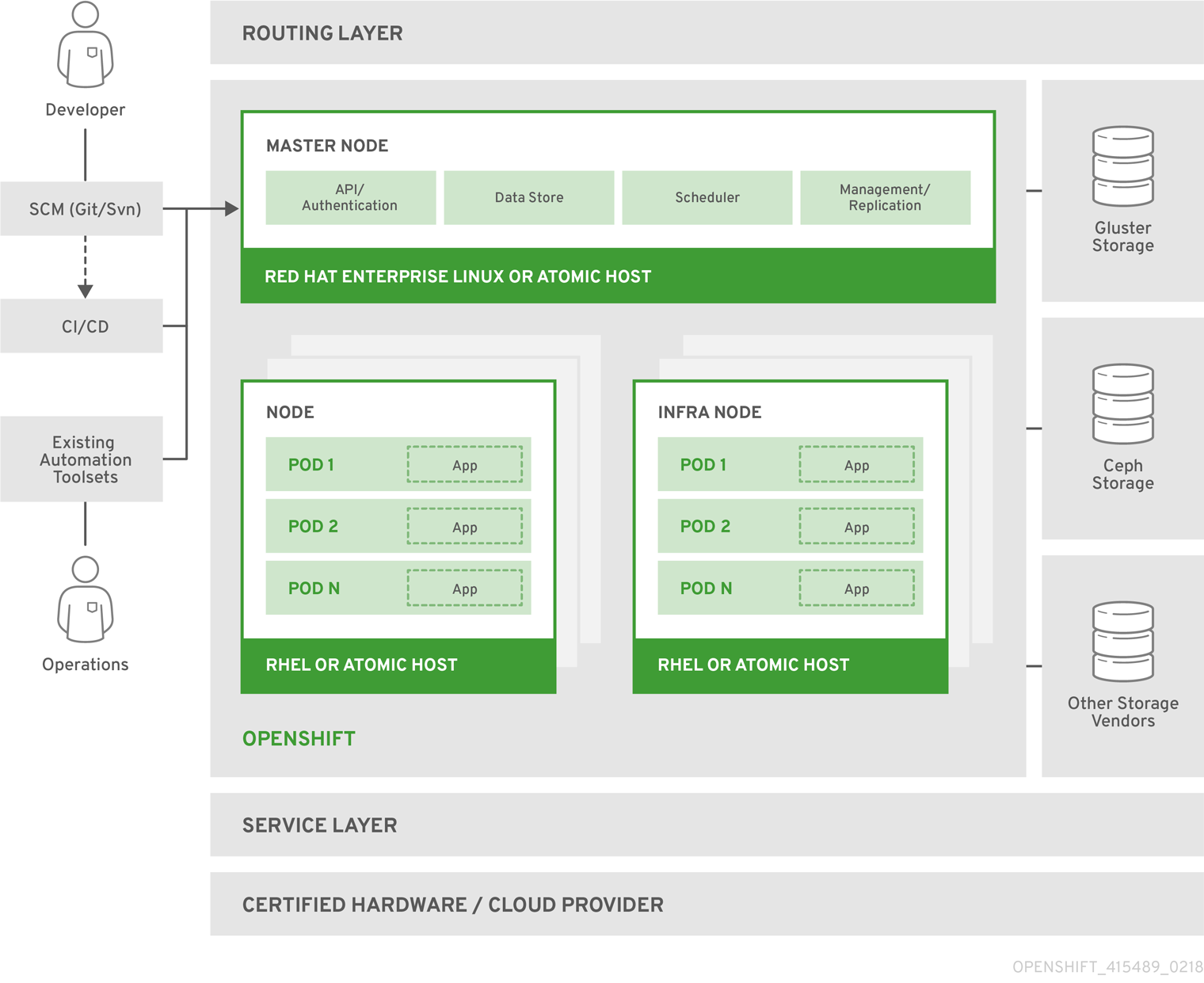 For more information on the node types in the architecture overview, see Kubernetes Infrastructure.

1.2. What Is the OpenShift Container Platform Architecture?

OpenShift Container Platform has a microservices-based architecture of smaller, decoupled units that work together. It runs on top of a Kubernetes cluster, with data about the objects stored in etcd, a reliable clustered key-value store. Those services are broken down by function:

Users make calls to the REST API to change the state of the system. Controllers use the REST API to read the user’s desired state, and then try to bring the other parts of the system into sync. For example, when a user requests a build they create a "build" object. The build controller sees that a new build has been created, and runs a process on the cluster to perform that build. When the build completes, the controller updates the build object via the REST API and the user sees that their build is complete.

The controller pattern means that much of the functionality in OpenShift Container Platform is extensible. The way that builds are run and launched can be customized independently of how images are managed, or how deployments happen. The controllers are performing the "business logic" of the system, taking user actions and transforming them into reality. By customizing those controllers or replacing them with your own logic, different behaviors can be implemented. From a system administration perspective, this also means the API can be used to script common administrative actions on a repeating schedule. Those scripts are also controllers that watch for changes and take action. OpenShift Container Platform makes the ability to customize the cluster in this way a first-class behavior.

To make this possible, controllers leverage a reliable stream of changes to the system to sync their view of the system with what users are doing. This event stream pushes changes from etcd to the REST API and then to the controllers as soon as changes occur, so changes can ripple out through the system very quickly and efficiently. However, since failures can occur at any time, the controllers must also be able to get the latest state of the system at startup, and confirm that everything is in the right state. This resynchronization is important, because it means that even if something goes wrong, then the operator can restart the affected components, and the system double checks everything before continuing. The system should eventually converge to the user’s intent, since the controllers can always bring the system into sync.

1.3. How Is OpenShift Container Platform Secured?

The OpenShift Container Platform and Kubernetes APIs authenticate users who present credentials, and then authorize them based on their role. Both developers and administrators can be authenticated via a number of means, primarily OAuth tokens and X.509 client certificates. OAuth tokens are signed with JSON Web Algorithm RS256, which is RSA signature algorithm PKCS#1 v1.5 with SHA-256.

Developers (clients of the system) typically make REST API calls from a client program like oc or to the web console via their browser, and use OAuth bearer tokens for most communications. Infrastructure components (like nodes) use client certificates generated by the system that contain their identities. Infrastructure components that run in containers use a token associated with their service account to connect to the API.

Authorization is handled in the OpenShift Container Platform policy engine, which defines actions like "create pod" or "list services" and groups them into roles in a policy document. Roles are bound to users or groups by the user or group identifier. When a user or service account attempts an action, the policy engine checks for one or more of the roles assigned to the user (e.g., cluster administrator or administrator of the current project) before allowing it to continue.

Since every container that runs on the cluster is associated with a service account, it is also possible to associate secrets to those service accounts and have them automatically delivered into the container. This enables the infrastructure to manage secrets for pulling and pushing images, builds, and the deployment components, and also allows application code to easily leverage those secrets.

All communication channels with the REST API, as well as between master components such as etcd and the API server, are secured with TLS. TLS provides strong encryption, data integrity, and authentication of servers with X.509 server certificates and public key infrastructure. By default, a new internal PKI is created for each deployment of OpenShift Container Platform. The internal PKI uses 2048 bit RSA keys and SHA-256 signatures. Custom certificates for public hosts are supported as well.

OpenShift Container Platform uses Golang’s standard library implementation of crypto/tls and does not depend on any external crypto and TLS libraries. Additionally, the client depends on external libraries for GSSAPI authentication and OpenPGP signatures. GSSAPI is typically provided by either MIT Kerberos or Heimdal Kerberos, which both use OpenSSL’s libcrypto. OpenPGP signature verification is handled by libgpgme and GnuPG.

The insecure versions SSL 2.0 and SSL 3.0 are unsupported and not available. The OpenShift Container Platform server and oc client only provide TLS 1.2 by default. TLS 1.0 and TLS 1.1 can be enabled in the server configuration. Both server and client prefer modern cipher suites with authenticated encryption algorithms and perfect forward secrecy. Cipher suites with deprecated and insecure algorithms such as RC4, 3DES, and MD5 are disabled. Some internal clients (for example, LDAP authentication) have less restrict settings with TLS 1.0 to 1.2 and more cipher suites enabled.

The following list of enabled cipher suites of OpenShift Container Platform’s server and oc client are sorted in preferred order: