This guide outlines the design concepts and workflow of Ansible Playbook Bundles (APBs), shows how to install and use the apb CLI tooling, and provides a tutorial and reference material on writing your own APBs.

An APB is a lightweight application definition that borrows several concepts from the Nulecule and Atomicapp projects, namely the concept of a short-lived container with the sole purpose of orchestrating the deployment of the intended application. For the case of APBs, this short-lived container is the APB itself: a container with an Ansible runtime environment plus any files required to assist in orchestration, such as playbooks, roles, and extra dependencies.

The OpenShift Ansible broker (OAB) is an implementation of the Open Service Broker (OSB) API that manages applications defined by APBs. The OAB is supported and deployed by default.

Specification of an APB is intended to be lightweight, consisting of several named playbooks and a metadata file to capture information such as parameters to pass into the application.

The APB workflow is broken up into the following steps:

You must prepare your APB’s directory structure and spec file before you can build and deploy it. The Getting Started topic provides a step by step tutorial on creating your first APB, while the following sections briefly cover this workflow.

The apb init command creates the required skeleton directory structure and a few required files (for example, the apb.yml spec file) for the APB.

The following shows an example directory structure of an APB:

An APB spec file (apb.yml) must be edited for your specific application. For example, the default spec file after running apb init looks as follows:

1
The metadata field is optional and used when integrating with the OpenShift Container Platform service catalog.
2
For APBs that do not have any parameters, the parameters field should be blank.

The following are the actions for an APB. At a minimum, an APB must implement the provision and deprovision actions:

The required named playbooks correspond to methods defined by the OSB API. For example, when the OAB needs to provision an APB it will execute provision.yml.

After the required named playbooks have been generated, the files can be used directly to test management of the application. A developer may want to work with this directory of files, make tweaks, run, repeat until they are happy with the behavior. They can test the playbooks by invoking Ansible directly with the playbook and any required variables.

The build step is responsible for building a container image from the named playbooks for distribution. Packaging combines a base image containing an Ansible runtime with Ansible artifacts and any dependencies required to run the playbooks.

The result is a container image with an ENTRYPOINT set to take in several arguments, one of which is the method to execute, such as provision and deprovision.

Deploying an APB means invoking the container and passing in the name of the playbook to execute along with any required variables. It is possible to invoke the APB directly without going through the OAB. Each APB is packaged so its ENTRYPOINT will invoke Ansible when run. The container is intended to be short-lived, coming up to execute the Ansible playbook for managing the application then exiting.

In a typical APB deploy, the APB container will provision an application by running the provision.yml playbook, which executes an Ansible role. The role is responsible for creating the OpenShift Container Platform resources, perhaps through calling oc create commands or leveraging Ansible modules. The end result is that the APB runs Ansible to talk to OpenShift Container Platform to orchestrate the provisioning of the intended application.

The following diagrams illustrate this deployment flow in two phases: a user discovering a list of available APBs and then requesting their chosen APB be provisioned to their project: 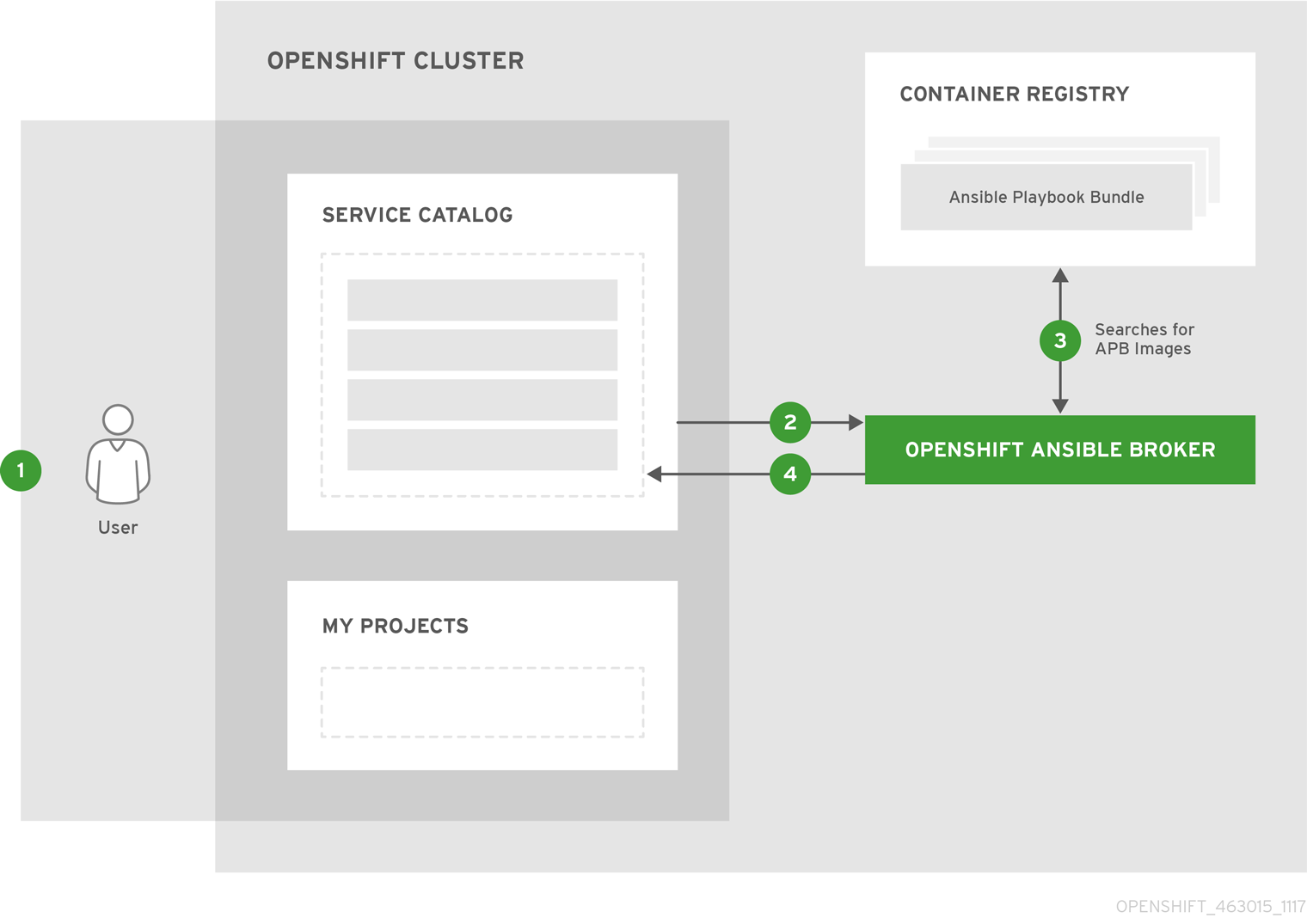 The service catalog requests a list of APBs from the OAB to show the user.

The OAB searches all configured container registries (the cluster’s OpenShift Container Registry or any other remote registry) for any APBs (images with a specific label, for example LABEL=apb-1.0).

The OAB returns the discovered list to the service catalog, to be viewed by the user in the OpenShift Container Platform UI. 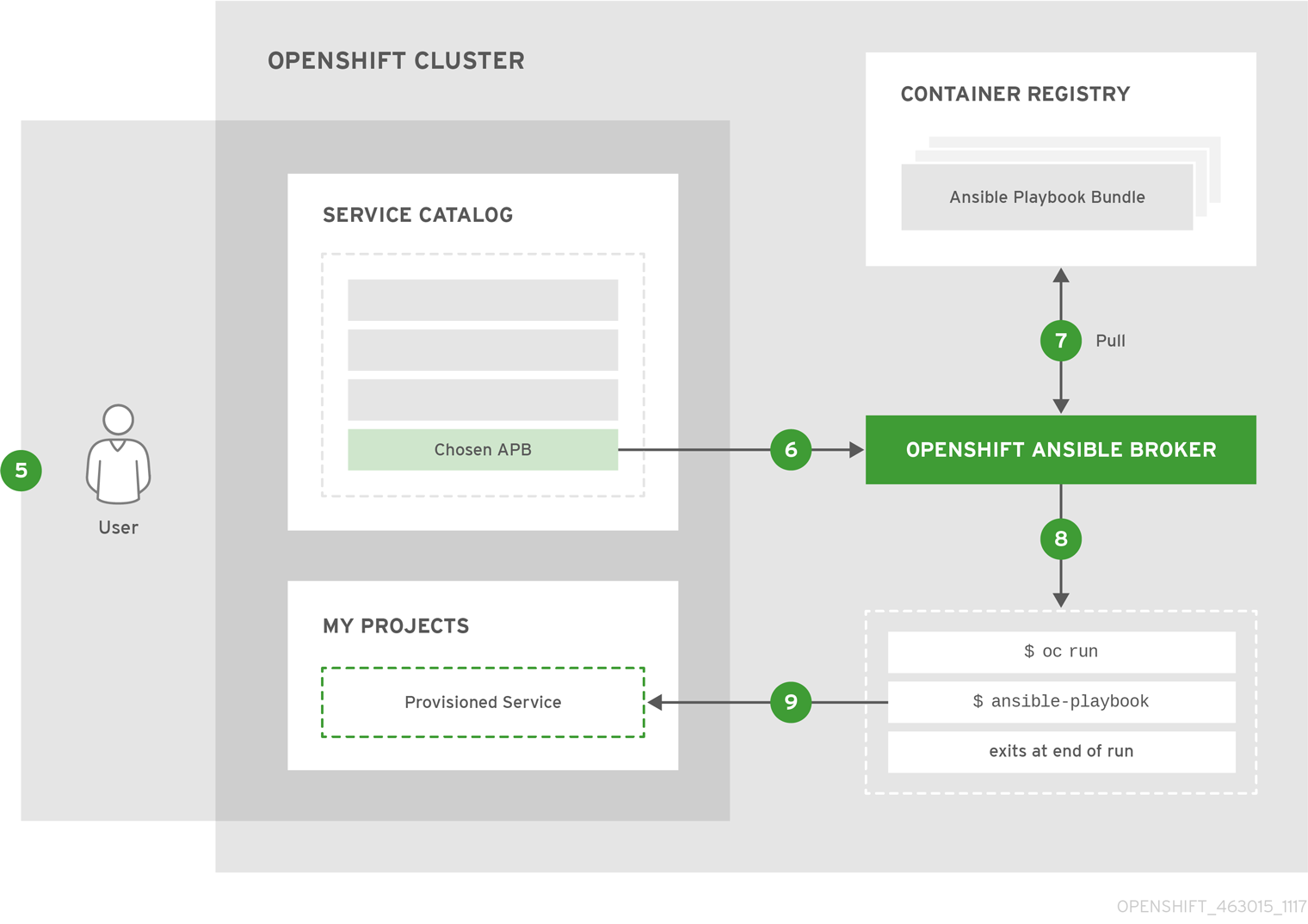 The user now chooses an APB from the discovered list provided by the service catalog.

The service catalog communicates with the OAB that the user has requested use of the chosen APB.

The OAB initiates the image pull from the appropriate container image registry.

After the image is pulled, the OAB defers the logic for orchestrating the application to the APB. The service is deployed by running the APB container with a few parameters. To do so, the following command is issued against the OpenShift Container Platform cluster in a temporary namespace:

To break this command down further:

As a result, the user views via the OpenShift Container Platform UI that their requested service has been successfully provisioned in their project.