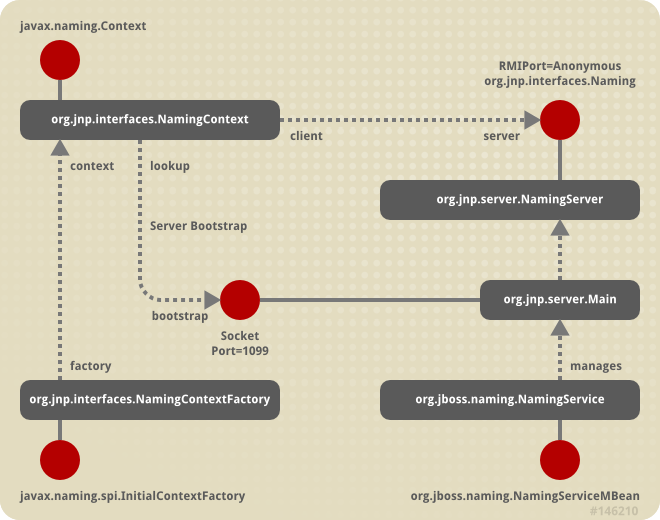 We will start with the NamingService MBean. The NamingService MBean provides the JNDI naming service. This is a key service used pervasively by the J2EE technology components. The configurable attributes for the NamingService are as follows.
The NamingService also creates the java:comp context such that access to this context is isolated based on the context class loader of the thread that accesses the java:comp context. This provides the application component private ENC that is required by the J2EE specs. This segregation is accomplished by binding a javax.naming.Reference to a context that uses the org.jboss.naming.ENCFactory as its javax.naming.ObjectFactory. When a client performs a lookup of java:comp, or any subcontext, the ENCFactory checks the thread context ClassLoader, and performs a lookup into a map using the ClassLoader as the key.
If a context instance does not exist for the class loader instance, one is created and associated with that class loader in the ENCFactory map. Thus, correct isolation of an application component's ENC relies on each component receiving a unique ClassLoader that is associated with the component threads of execution.
The NamingService delegates its functionality to an org.jnp.server.Main MBean. The reason for the duplicate MBeans is because JBoss Naming Service started out as a stand-alone JNDI implementation, and can still be run as such. The NamingService MBean embeds the Main instance into the server so that usage of JNDI with the same VM as the server does not incur any socket overhead. The configurable attributes of the NamingService are really the configurable attributes of the JBoss Naming Service Main MBean. The setting of any attributes on the NamingService MBean simply set the corresponding attributes on the Main MBean the NamingService contains. When the NamingService is started, it starts the contained Main MBean to activate the JNDI naming service.
In addition, the NamingService exposes the Naming interface operations through a JMX detyped invoke operation. This allows the naming service to be accessed via JMX adaptors for arbitrary protocols. We will look at an example of how HTTP can be used to access the naming service using the invoke operation later in this chapter.
When the Main MBean is started, it performs the following tasks: