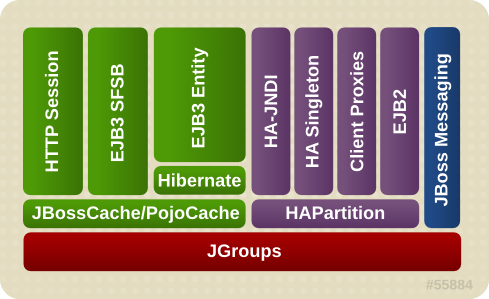 JGroups provides the underlying group communication support for JBoss Enterprise Application Platform clusters. Services deployed on JBoss Enterprise Application Platform which need group communication with their peers will obtain a JGroups Channel and use it to communicate. The Channel handles such tasks as managing which nodes are members of the group, detecting node failures, ensuring lossless, first-in-first-out delivery of messages to all group members, and providing flow control to ensure fast message senders cannot overwhelm slow message receivers.
The characteristics of a JGroups Channel are determined by the set of protocols that compose it. Each protocol handles a single aspect of the overall group communication task; for example the UDP protocol handles the details of sending and receiving UDP datagrams. A Channel that uses the UDP protocol is capable of communicating with UDP unicast and multicast; alternatively one that uses the TCP protocol uses TCP unicast for all messages. JGroups supports a wide variety of different protocols (see Section 28.1, “Configuring a JGroups Channel's Protocol Stack” for details), but the Enterprise Application Platform ships with a default set of channel configurations that should meet most needs.
By default, all JGroups channels of the Enterprise Application Platform use the UDP multicast (an exception to this is a JBoss Messaging channel, which is TCP-based). To change the default multicast type for a server, in <JBOSS_HOME>/bin/ create run.conf. Open the file and add the following: JAVA_OPTS="$JAVA_OPTS -Djboss.default.jgroups.stack=<METHOD>".

A significant difference in JBoss Enterprise Application Platform 5 versus previous releases is that JGroups Channels needed by clustering services (for example, a channel used by a distributed HttpSession cache) are no longer configured in detail as part of the consuming service's configuration, and are no longer directly instantiated by the consuming service. Instead, a new ChannelFactory service is used as a registry for named channel configurations and as a factory for Channel instances. A service that needs a channel requests the channel from the ChannelFactory, passing in the name of the desired configuration.
The ChannelFactory service is deployed in the server/production/deploy/cluster/jgroups-channelfactory.sar. On start up the ChannelFactory service parses the server/production/deploy/cluster/jgroups-channelfactory.sar/META-INF/jgroups-channelfactory-stacks.xml file, which includes various standard JGroups configurations identified by name (for example, UDP or TCP). Services needing a channel access the channel factory and ask for a channel with a particular named configuration.

If several services request a channel with the same configuration name from the ChannelFactory, they are not handed a reference to the same underlying Channel. Each receives its own Channel, but the channels will have an identical configuration. A logical question is how those channels avoid forming a group with each other if each, for example, is using the same multicast address and port. The answer is that when a consuming service connects its Channel, it passes a unique-to-that-service cluster_name argument to the Channel.connect(String cluster_name) method. The Channel uses that cluster_name as one of the factors that determine whether a particular message received over the network is intended for it.

By default, all clustering services other than JBoss Messaging use the udp protocol stack configuration. If you want to use a TCP-based configuration, set the system property jboss.default.jgroups.stack to the tcp value (-Djboss.default.jgroups.stack=tcp). This change configures most of the services that use a JGroups channel to use the TCP-based configuration. To make tcp the default protocol stack, add the system property to the JAVA_OPTS environment variable in the <JBOSS_HOME>/bin/run.conf file on Linux platforms or <JBOSS_HOME>/bin/run.conf.bat on Windows platforms.
The tcp stack uses UDP multicast (via the MPING layer) for peer discovery. This allows the stack to avoid environment-specific configuration of hosts and work out of the box. If you cannot use UDP multicast, you need to change to a non-UDP-based peer-discovery layer (the TCPPING layer) and configure the addresses/ports of the possible cluster nodes. You can change the protocol stack configuration in jgroups-channelfactory-stacks.xml. The file contains definitions for both peer-discovery layers: by default, the definition of MPING layer is uncommented and the TCPPING layer is commented. To switch to non-UDP based peer-discovery, comment out the MPING layer, and uncomment and configure the TCPPING layer. For more information on MPING and TCPPING, refer to Section 28.1.3, “Discovery Protocols”.

Example 21.1. Definition of the jbm-data protocol stack with TCPPING definition

Make sure the defined ports do not conflict with ports used by other TCPPING layers. You can also use the system property -Djbm.data.tcpping.initial_hosts to configure the set of initial hosts for this layer from JAVA_OPTS.

As the number of JGroups-based clustering services running in the Enterprise Application Platform has risen over the years, the need to share the resources (particularly sockets and threads) used by these channels became a glaring problem. A stock Enterprise Application Platform 5 production configuration will connect 4 JGroups channels during start up, and a total of 7 or 8 will be connected if distributable web apps, clustered EJB3 SFSBs and a clustered JPA/Hibernate second level cache are all used. So many channels can consume a lot of resources, and can be a real configuration nightmare if the network environment requires configuration to ensure cluster isolation.
Beginning with Enterprise Application Platform 5, JGroups supports sharing of transport protocol instances between channels. A JGroups channel is composed of a stack of individual protocols, each of which is responsible for one aspect of the channel's behavior. A transport protocol is a protocol that is responsible for actually sending messages on the network and receiving them from the network. The resources that are most desirable for sharing (sockets and thread pools) are managed by the transport protocol, so sharing a transport protocol between channels efficiently accomplishes JGroups resource sharing.
To configure a transport protocol for sharing, simply add a singleton_name="someName" attribute to the protocol's configuration. All channels whose transport protocol configuration uses the same singleton_name value will share their transport. All other protocols in the stack will not be shared. Figure 21.2, “Services using a Shared Transport” illustrates 4 services running in a VM, each with its own channel. Three of the services are sharing a transport; the fourth is using its own transport. 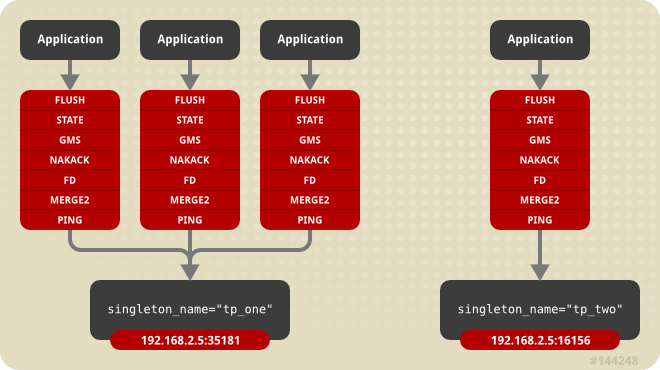