Provisioning in PXE-less or DHCP-less environments is a common scenario in the enterprise and Satellite 6 offered Bootdisk plugin to solve this problem partially. The Satellite 6.1.5 feature erratum introduces PXE-less discovery which is a great alternative with much broader hardware support.

Starting today, it is possible to boot provisioned hosts from the Discovery image directly as a CDROM/DVDROM ISO that can be also transferred to hard drive or USB stick. Since the Discovery image is based on Red Hat Enterprise Linux 7, it supports all kinds of hardware that was certified to work with it. Once the host is discovered, provisioning will be initiated remotely from the Satellite 6 web interface (or automatically via discovery rules). Instead of rebooting, the kernel on the discovered node will be reloaded live (via kexec tool) into Anaconda.

Thanks to a new text-based user interface, several new provisioning workflows are possible:

Provisioning with DHCP (no PXE)

Creating such a media is easy, make sure all capsules are updated and transfer the image to USB stick:

Nothing changed in the traditional PXE-based discovery, except the new text-user interface. Initial countdown is shown where the process can be interrupted entering the PXE-less interactive menu. 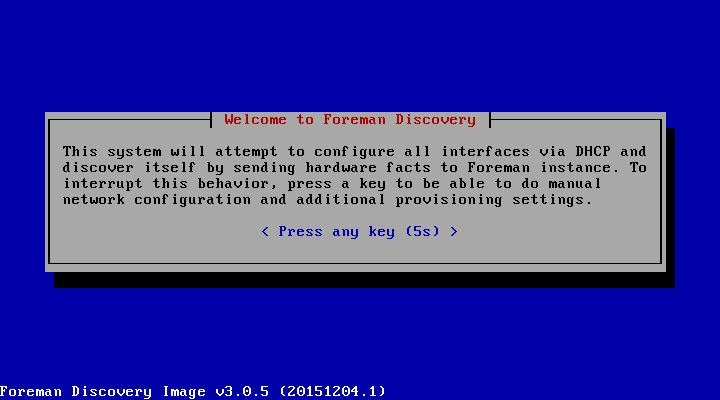 Once the node is discovered, status screen is available with some info. Reported facts can be listed, system log investigated and SSH daemon can be enabled to be able to log in remotely (it is disabled by default). 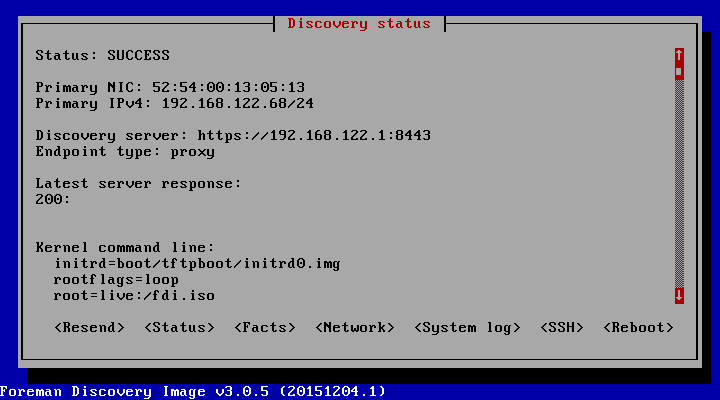 Thank to the new user interface, the usage is straighforward. Once the node is booted up from the media, select appropriate option to configure IPv4 manually, or use DHCP. 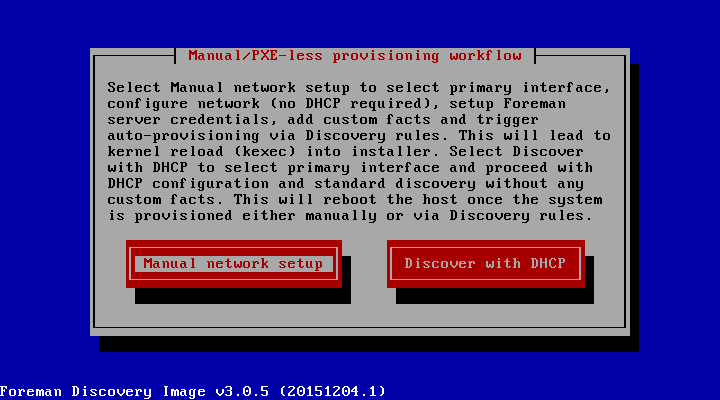 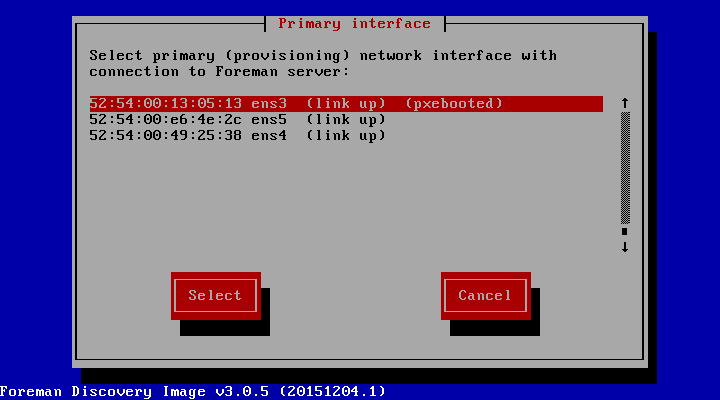 Enter network credentials. The IPv4 address must be in the CIDR notation (1.2.3.4/N) with valid netmask. 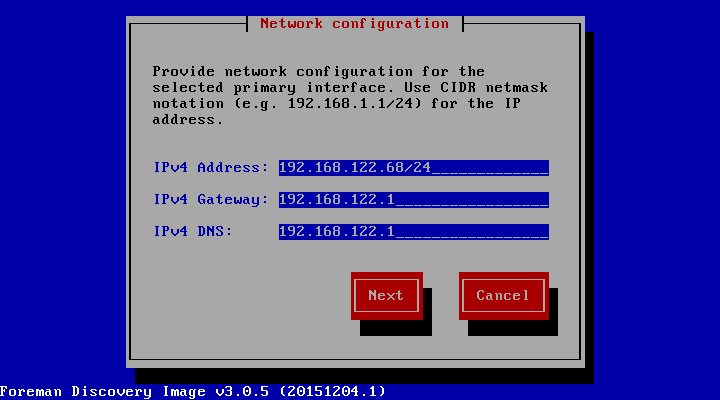 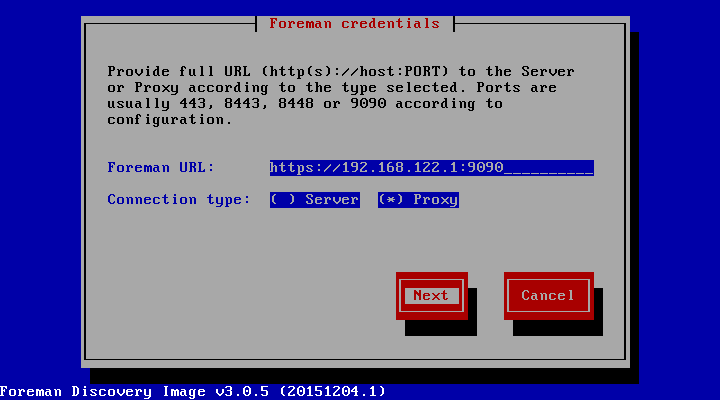 Provide optional facts to be reported with this node. These facts can be used to trigger auto-provisioning rules, so typical usage is something like "deployment_type" or "security_token". Enter "discovery_organization" and/or "discovery_location" to assign taxonomy to the discovered node. 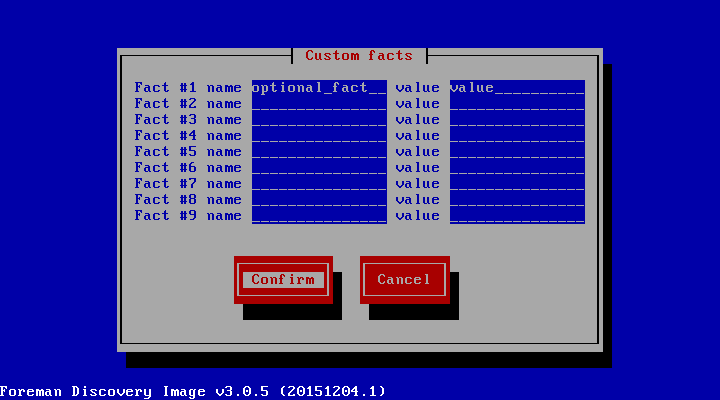 The node is registered and awaiting orders. Note the "kexec" word in the status line. This node will send "discovery_kexec" fact which tells Satellite 6 Server to order kexec command instead of reboot during provisioning. 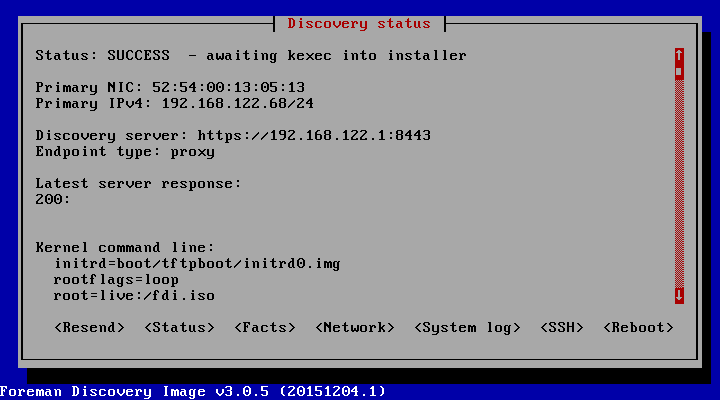 All interactive screens can be partially or fully automated via kernel command line that can be either entered during SYSLINUX/Grub2 boot screen or burnt into the image (using re-master script - shown below). Options are self-explanatory:

When px.ip and/or px.gw are omitted, image tries to acquire network credentials via DHCP, which can be useful in PXE-less environments with DHCP server deployed. Therefore the absolute minimum set of options in this case is:

The pxmac option defines the provisioning interface to be used to acquire network credentials (optionally) and send facts. If omitted in unattended mode, the first NIC with link is picked up (in alphabetical order by network identifier in case of multiple items). In semi-automated mode, screen will appear to select the correct interface.

All values must be confirmed in the text-user interface first, which gives semi-automatic behavior. To initiate the provisioning without any question (unattended mode or fully automatic), add the following option:

When fdi.pxauto is not provided, Ok/Next buttons are always focused first on all screens therefore it is easier to walk through all screens.

A helper script called discovery_remaster is currently not being shipped with Satellite 6. Until it is shipped, download it from: https://github.com/theforeman/foreman-discovery-image/blob/master/aux/remaster/discovery-remaster

Usage is simple, accepted values are described above.

The above command creates a copy in the same directory with date/time stamp in the name.

Check if the Operating System that was used for provisioning is associated with Red Hat Kexec template. Without this association, Satellite 6 falls back to normal reboot which will not start provisioning process, but again boot from the media.

Error 404 when rebooting a discovered node

There was a change in the REST API on the discovery image, reboot and re-discover the node before initiating provisioning. Also check if package versions match as described in this article.

Make sure IPAPPEND 2 option is provided in the PXELinux global default template. Discovery image expects BOOTIF kernel option and if it's not present, it goes into interactive mode.

Endpoint is reported as N/A after discovery

After PXE-less discovery, endpoint on the overall status screen is not shown and appear as N/A. It only displays incorrect, it was configured properly. We track this bug as https://bugzilla.redhat.com/show_bug.cgi?id=1285980

In some circumstances when DHCP initialization is slow, a discovered node may attempt to register itself before the network is up. This can lead to race condition. Use Resend button or restart foreman-proxy and discovery-register services from the console. This issue is tracked as bug https://bugzilla.redhat.com/show_bug.cgi?id=1262950

After kexec into RHEL6 kernel, the Anaconda operates normally, but there is no ouput as the console is frozen. Wait until provisioning finishes and reboot into the newly installed system. If the system does not reboot, there might be error in the kickstart. Try to provision the host normally with the same host or hostgroup options first.

When an error appears during interactive mode, the root account will be unlocked with a random password. Use tty2 to investigate system journal and tty3 to log in and call discovery-debug script which will create an output that can be copypasted for futher investigation.

I have everything setup, but having a problem with Location. I am able to set the location in the discovered host list, but when I go to provision and select the host-group the location is changed to "default location". That location has no resources so I am unable to provision, and I'm unable to change it back for provisioning.

Hello, make sure the hostgroup, subnet, domain and other resources have the selected location assigned. Taxonomy cannot be changed in Discovered host provisioning, this is a known limitation of 6.1.

If that does not help, report a BZ and as a workaround, create Discovery Rule associated with the hostgroup and use that for provisioning

Not sure which item fixed, but after verification of provisioning and locations it worked. Huge win, thank you!

I still have the same problem. I also have checked hostgroup, subnet, domain. But when i change the hostgroup, the location still changed to "default location" What else must i checked or is it this bug http://projects.theforeman.org/issues/8148 I use Satellite 6.1.8

This is known bug which will be fixed in Satellite 6.3 with introduction of improved modal dialog: http://projects.theforeman.org/issues/4426 (we missed 6.2 deadline with this bug).

The link for the discovery-remaster script has either changed or is incorrect (maybe github changed their API). It should be:

Lukas, if we are utilizing this feature in an environment without PXE it implies we to not have a TFTP service sharing our OS installation ISO's. What is the mechanism by which these discovered hosts will receive their OS image?

OS installer kernel and init ram disk are both fetched via http directly from repository.

In case the discovered host is rebooted instead of kexec, make sure that Template is assigned to the OS and it is selected as the default "kexec" template. When provisioning, click on Resolve templates and check the "kexec" template.

I am having an issue with the foreman discovery image. The image works fine - The host get defined and discovered. I select the host from the UI and hit "Provision" but the host reboots and boots from the discovery image again. If we define a kexec, the host does not reboot :( Are you able to please give me some guidance here.

Investigate Sat6 logs, there should be an ERROR or exception during kexec call I suppose.

Hi: I'm a bit new to this. I would like to customize the foreman-discovery-image-3.1.1-16.iso. I note that my Sat 6 server now has a copy of discovery-remaster on it so I should be good to go. I am in an environment where I can't use PXE and already have an established DHCP infrastructure so I thought I would use a minimum set of options. My question is about terminology - when I look at your suggestions I see that I need to include at least the following 2 options: proxy.url=https://capsule:9090 proxy.type=proxy

If the box being built does require a proxy to talk to the satellite server would the correct options be: proxy.url=https://satellite_server_name:9090 proxy.type=none

Hello, well if you won't include these, the TUI will ask for these. It's faster to put them on the kernel command line if you only have one capsule or satellite server. For N networks/capsules you can create N images so it's less typing. But it is optional.

For directo connection (no capsule) it is actually: proxy.url=https://satellite_server_name:443 proxy.type=foreman (note the different port, type is actually anything other than "proxy" so none would work too)

I am using satellite 6.1.8 with PXE-less to kickstart my server. it is working fine with bios booting system for my rhel 6 and rhel 7 kickstart. But when come to server with UEFI boot, my rhel 6 having issue... After received the response from foreman, the system hang when then NetworkManager link disconnected. But when i do with rhel 7, everything is working as expected.

is there any hardware limitation in PXE-less boot with RHEL 6? because i am able to do manual installation with RHEL 6 ISO.

Hello, unfortunately RHEL 6 in UEFI via PXE-less workflow is not supported:

BIOS will work, we had couple of bugs (video drivers) but it's all fixed, make sure you have the latest version of the FDI image tho.