In this usage, the customer wants to use Puppet Enterprise for Configuration Management i.e. node classification, infrastructure event reporting, application orchestration, and device integrations such as networking and storage, and use Satellite 6 for everything else (Provisioning, Errata Management, Subscription Management, etc)

First, Red Hat Satellite is used to synchronize in the Puppet Enterprise (PE) Agent RPMs for the versions of RHEL that will be managed. This is done by means of a Custom Product, and a repository of type yum. This allows the customer to deploy the Agent RPM during provisioning as part of a Content View. Additionally, as with all custom product, subscription tracking capabilities (via hammer subscription list for example) 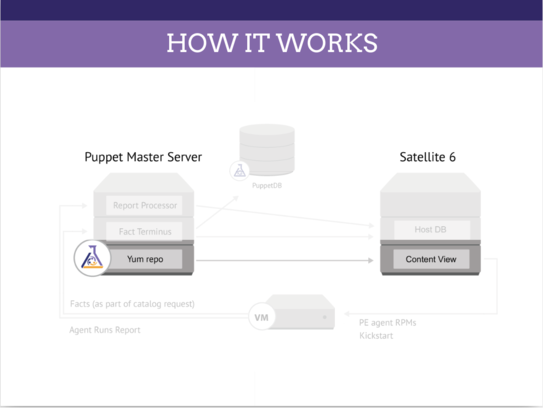 Next, the system is provisioned using any of the supported methods in Satellite. We provide a customized provisioning template & snippet (more on these below), which install the PE agent and not the Puppet Agent as shipped in the Satellite tools repository. Additionally, the provisioning templates configure the pe-puppet.conf file with the user-provided hostname of the Puppet Master that is to be used. A Hostgroup Parameter is used to configure the hostname of the Puppet Master and Puppet Certificate Authority 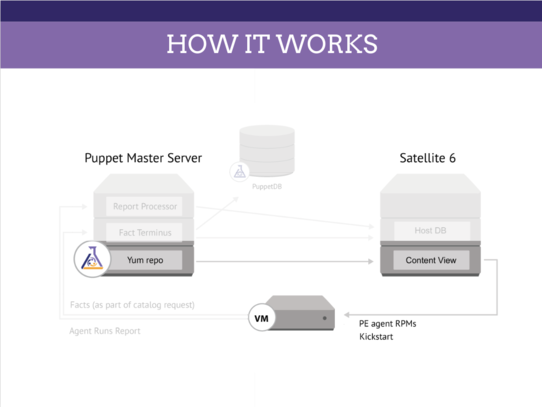 After the node completes its first puppet run, its agent certificate is approved and it is classified (either manually or via rules). Ongoing puppet runs are reported to whichever Puppet Master was designated during provisioning. 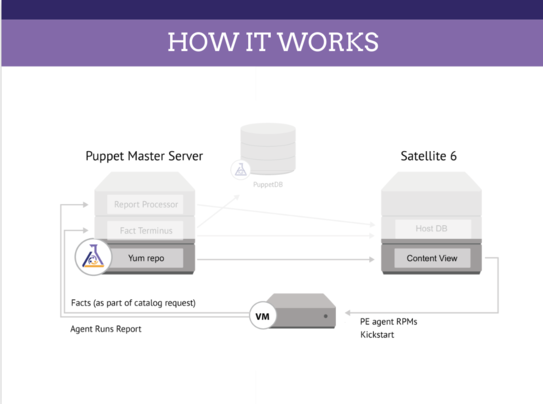 Lastly, ongoing facts and reporting data are reported to Satellite via the custom reports processor and facts terminus. Additionally this data is stored in PuppetDB 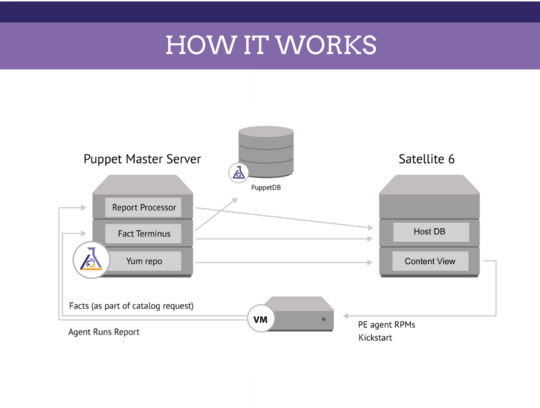 Getting Started with the Satellite 6 & Puppet Enterprise Integration.

Can you provide an ETA for when this reference architecture is going to be released?

The yum repo sync, of the PE master, fails on the self-signed SSL cert (see Bugzilla 1210878). The work around is to copy the PE RPMs to an non-SSL HTTP server and import from there.

Communications between the PE master and Satellite can be found in the following log: pe-master:/var/log/puppetlabs/puppetserver/puppetserver.log

Should this work with Satellite 6.2 - as I cant seem to get it to work

Should I need to disable safe mode rendering?

Do I have to use Puppet Enterprise to do Configuration and Inventory Reporting? or the standard Satellite is enough?

Hi, Currently we have Puppet PE 2017.2.2 [ 4.x ] with 4 compile masters, a physical DB box, a console puppet server for managing 4000+ Unix nodes. We came out of Satellite 5 couple of years ago. Now we are planning to bring in Satellite 6 , not decided if 6.2 or 6.3 yet. I'm thinking how complex and complicated this idea could be to use satellite 6 suppressing its puppet features. Moreover in terms of long run, for maintenance like upgrading satellite 6 Or migration from current PE to puppet within satellite in future. We are not sure if we are about to try something more challenging and uncommon in practice. I was referring at this as well - https://access.redhat.com/discussions/2815821 - Integration of Red Hat Satellite 6.2.x with external Puppet Master

I need some expert advice/opinion from your experience on this to learn if this is good even to try or not ? Please share your valuable suggestion.

Some things to consider: This has not been touched by Puppet or Red Hat in almost a year. There is no current information that I have been able to locate. If you know of any, please share. Satellite 6.3 has Puppet 4.x inside it while 6.2.x has the EOL Puppet 3.x in it.

Looking for an updated version of this with current software versions for 2019.

This document needs to updated for Satellite 6.5, and it's new templates. PE Puppet is still viable for the customers.

Is there an update for satellite 6.6?